30 Years EAPN | Reflecting with our Presidents 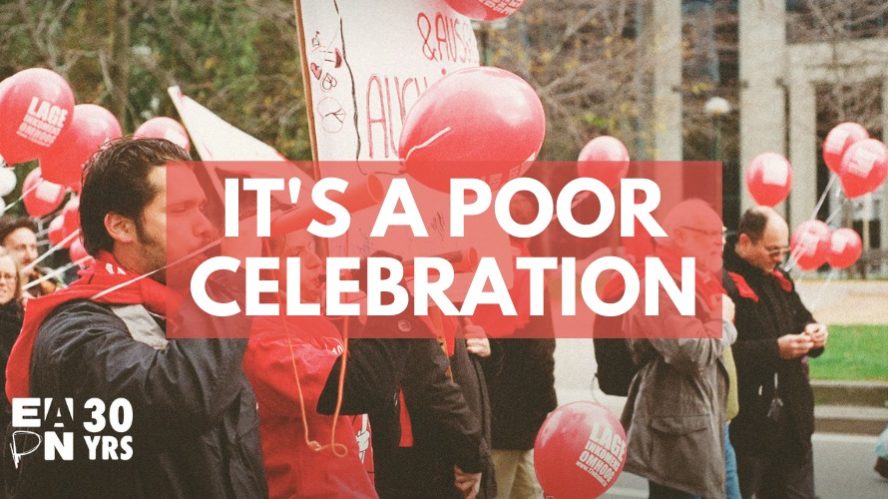 Looking back and looking forward

In 2020, EAPN celebrates its 30th anniversary. Over three decades, EAPN has become the largest European network of anti-poverty NGOs and grassroots organisations and during these years, we have consistently been fighting to end poverty across Europe. Yet way too many people still face the serious burden of poverty and social exclusion. This makes our anniversary a poor celebration.

To look back and forward, we invited six of our Presidents to an online celebration to reflect on EAPN’s biggest achievements, major challenges and their favorite anecdotes. This online gathering really highlighted the shared history of EAPN – and our collective strength, via our people, our members, our staff. Here is an overview of the reflections by Massimo, Fintan, Ludo, Maria, Sérgio and Carlos.

Massimo was the second President of EAPN and has experienced the starting roots of our network. The biggest achievement during his mandate was the presence of EAPN at the Conference of the European Commission at Copenhagen in 1993. During this conference, the European Commission recognised the role of EAPN as important consultation partner to make their vision of a “Citizen’s Europe” reality.

Massimo’s anecdote is one of royal greatness. During the General Assembly in Hertogenbosch (1994), he had the pleasure of meeting Queen Beatrix of the Netherlands and have a pleasant conversation with her.

The Presidency of Coordination

Fintan was the President of EAPN from 1996 until 2000. Looking back at his time, he described the Lisbon Strategy, with the creation of the Social Open Method for Coordination as primary achievement. This Open Method was the blueprint for the coordination of social issues.

For Fintan, his favourite moments were during the General Assemblies. Besides being very important to the network, these gatherings were also very vibrant and joyful. He specifically remembers the General Assembly in Barcelona, where one of the member networks made a song about how EAPN handled the overload of amendments at that time.

Ludo is to this date the President with the longest mandate (9 years). This made it difficult to pin down just one big achievement, as many things happened during his Presidency. One thing that definitely stood out was the European Year for the Fight Against Poverty in 2010. During this year EAPN acted as the motor for the European 2020 Strategy and its goal to reduce poverty by at least 20 million people.

Ludo also highlighted the European Strategy for Active Inclusion (2008) as one of the key moments for EAPN. With the initiatives on adequate minimum income, inclusive labour markets and access to quality services, it was acknowledged that EAPN had the tools to put poverty on the agenda.

Ludo did not only reflect on the achievements of EAPN. Unfortunately, 2020 proved that too little effort was made to reach the goal of the Europe 2020 Strategy. Despite EAPN’s great work of putting constant pressure on governments and the European Union, both the European and national authorities did not commit to the promises made.

For Ludo one of his favourite anecdotes was inspired by the recent retirement of EAPN’s policy coordinator, Sian Jones. When Sian started in 2006, Ludo wanted everyone to pronounce her name correctly during the General Assembly. He practiced the pronunciation of her name with the members, making them repeat after him many times. If someone now pronounces her name wrong, he knows they were -not!- present at the 2006 General Assembly.

The Presidency of Beautiful Illusions

Maria was one of the two female Presidents of EAPN. Therefore, looking back at three decades of our network, she firstly wanted to call for more female presidents.

She remembers her mandate as a period of beautiful illusions. The Lisbon Strategy presented a beautiful triangle of social cohesion, growth and jobs. With the appearance of the Kok-report, that triangle shifted toward growth and jobs. The more we focus on strategies in the line of ‘jobs and growth’, the more the poor become poorer and the rich richer. Unfortunately, the Europe 2020 Strategy focused on these same elements.

One of the main challenges Maria had to face during her Presidency was the enlargement of 10 new Member States, as it was not certain whether both the EU and EAPN were ready for such a change.

Maria did not only reflect on the past, but also looked forward. For the next 30 years mandate, she sees the importance of social justice, non-discrimination and equal rights as key elements to keep having impact.

Maria’s favourite anecdote is one that fell out of the scope of her Presidency. At the General Assembly in Lisbon (2011), she invited and welcomed the Macedonian Anti-Poverty Network. This moment was of symbolic significance, as it showed that the determination to end poverty does not recognise borders and names.

The Presidency of Survival

Sérgio was the President of EAPN for two mandates and described his period as one of constant surviving. During his Presidency, EAPN faced many challenges: a long-standing Director and former President Fintan was leaving and most importantly the big cuts in the funding for both EAPN as civil society in general. This led to less resources, the loss of staff and loss of energy.

Overall, Sérgio is proud to see how he and EAPN have survived all these obstacles. EAPN’s strength lies in the fact that the network was able to stay together and kept fighting throughout both the good and the bad times.

The biggest achievement during his Presidency was to make the People Experiencing Poverty Meetings survive. EAPN’s key role is to give a voice to the people in poverty and keep the Meetings as their own. The survival of these meetings was thus a great achievement for the continuation of EAPN.

Despite all the difficulties he had to face during his mandate, Sérgio reflected on some of his favourite memories. One of these moments happened during the meeting on the European Pillar of Social Rights, when they wanted to take a group photo. “Theresa May was not around and the photographer shouted: who cares?! Then Theresa May joined us and no one really knew what to do…”

Carlos is our current President and is facing an unknown challenge with the pandemic. With Covid, EAPN and its member had to adapt to many different ways of working. He emphasised the difficulties of switching to a digital way of working and online meetings, but was proud to see that we are coping quite well.

The most important thing for Carlos is that EAPN will keep working with People Experiencing Poverty and that we make sure the world does not forget that these people were already living rough realities prior to the pandemic, and that Covid has only worsened their situations.

The biggest achievement according to Carlos is the strength of our networks, which we should always remember.

Carlos’s favourite memory so far is – as for most of the other five Presidents – one of a General Assembly. During the GA in Groningen, Fintan was singing and Massimo was fully enjoying the celebration, and that was the moment Carlos realised he was part of something really big.

Manifesto on Child Poverty and Social Exclusion in the EU
May 27, 2021
Go to Top