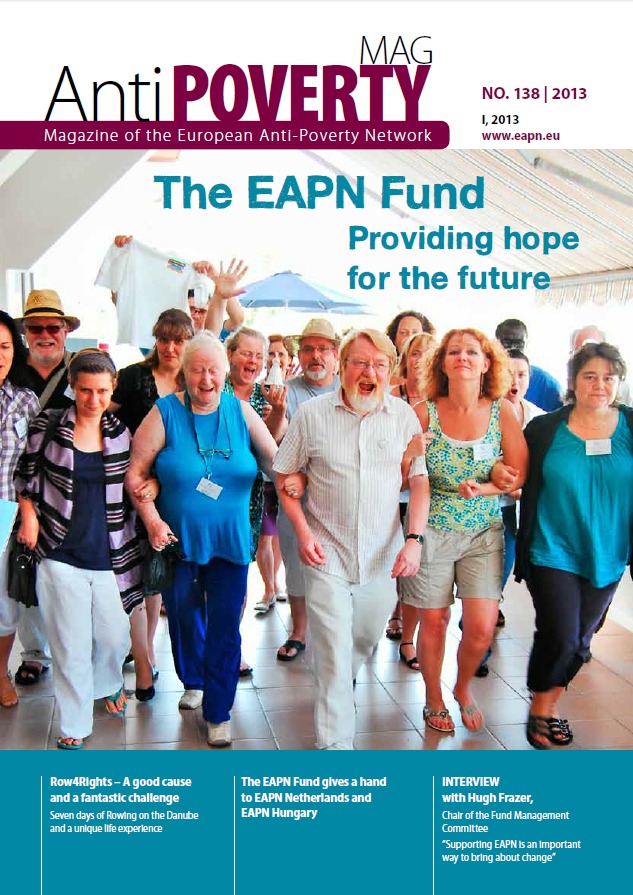 END_OF_DOCUMENT_TOKEN_TO_BE_REPLACED

Strengthening the democratic legitimacy of the European Semester

END_OF_DOCUMENT_TOKEN_TO_BE_REPLACED

EAPN participated in this significant Euroforum conference. The Euroforum is part of the interdisciplinary think-tank Metaforum, and aims to present a synthesis of the latest scientific research to a layman’s audience.

END_OF_DOCUMENT_TOKEN_TO_BE_REPLACED

23/04/13 – by Nicoletta Teodosi, Cilap Eapn Italy – The latest tragic news reports, three person suicides due to financial problems, confirm that social services are experienced as an indignity. Confirms the sense of marginality in which a person can find him/herself in a particular moment in their lives.

END_OF_DOCUMENT_TOKEN_TO_BE_REPLACED

When the price of bread rises, who worries?

Young or old, alone or in a couple, with or without children, unemployed, worker or retired, people’s daily lives are riddled with problems due to lacking money.

END_OF_DOCUMENT_TOKEN_TO_BE_REPLACED

Some news from EAPN Ireland

KISA (Movement for the Support of Migrants), member of EAPN Cyprus – A victim of labour trafficking is missing

A victim of labour trafficking is missing and is desperately sought by his family, friends and KISA for the last 15 days. The case was reported two weeks ago by KISA, first at the police’s Office for Combating Trafficking (OCT) and then at the local police station of the area where the victim lived and…

END_OF_DOCUMENT_TOKEN_TO_BE_REPLACED

The Campaign for a Guaranteed Minimum Income, launched in 2012, collected more than 50 thousand signatures throughout Italy but this country has not had a political government to whom deliver such a request since December 2012.

We can’t wait any longer!