CHECK OUT WHAT IS GOING ON IN YOUR OWN COUNTRY AROUND 17 OCTOBER! EU level, Belgium, UK, Cyprus, Slovakia, Portugal, Norway, Poland, France, Spain, Macedonia… and check our Facebook page of course! www.facebook.com/EuropeanAntiPovertyNetwork

END_OF_DOCUMENT_TOKEN_TO_BE_REPLACED

CHECK OUT WHAT IS GOING ON IN YOUR OWN COUNTRY AROUND 17 OCTOBER!

END_OF_DOCUMENT_TOKEN_TO_BE_REPLACED

04 October 2013 – The European Anti-Poverty Network (EAPN) sent an urgent letter to President of the European Commission Mr Barroso which concluded that the European Semester had failed to deliver on its promises on poverty reduction and stakeholders had not been able to engage and contribute to the Europe 2020 decision-making processes in any meaningful way. The letter also made reference to previous statements by President Barroso when he referred “the pressing need for effective policies” to address poverty, or called them an “economic necessity”.

END_OF_DOCUMENT_TOKEN_TO_BE_REPLACED

EAPN attends the Expert discussion ”A leap ahead: social innovation in social services” organised by Eurodiaconia

END_OF_DOCUMENT_TOKEN_TO_BE_REPLACED

EAPN calls on 2014 European elections candidates to make the fight against poverty, social exclusion and inequality a priority for Europe

Brussels, 26 September 2013 – On 01 October, EAPN will be holding a debate with four major European political parties, highlighting both their commitments and civil society’s demands, regarding poverty and social exclusion. This event will be a first step before EAPN’s campaign on the European elections kicks off this coming November.

END_OF_DOCUMENT_TOKEN_TO_BE_REPLACED 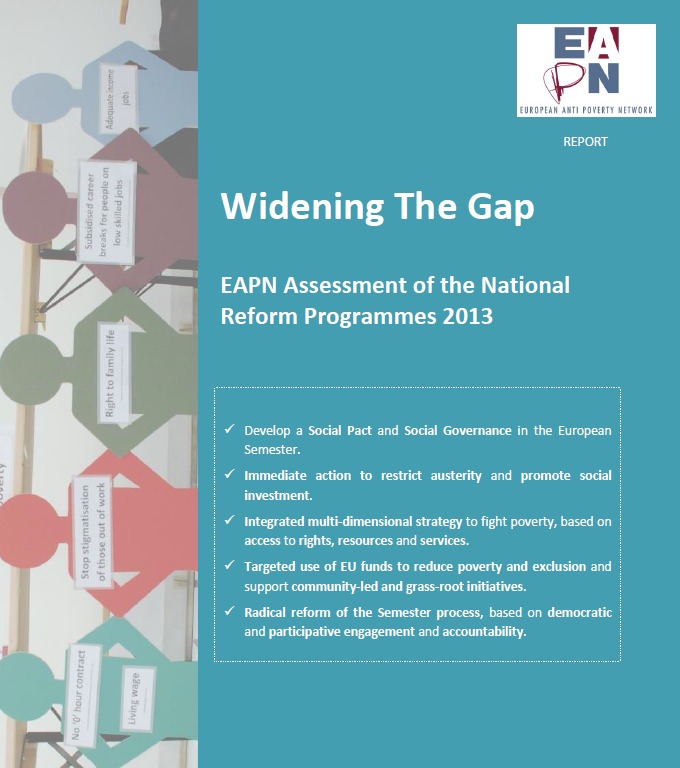 EAPN Assessment Critical of Europe 2020: Poverty and Inequality at an All Time high

25 September 2013, Brussels – Today, the European Anti-Poverty Network (EAPN) releases its new assessment of the 2013 National Reform Programmes (NRPs). The report not only shows widening social imbalances, but also gives recommendations on how to tackle them. The report is based on a questionnaire assessment from 19 EAPN National and EU Networks. It gives evidence that the EU is falling short on its promises on Social Europe, particularly on poverty, which has risen by 4 million in the last year, when the EU poverty reduction target is to reduce poverty by 20 million by 2020. It also outlines the worsening of the social impact of the crisis exacerbated by austerity measures, with unemployment, poverty and inequalities reaching untenably high levels. The conclusions and recommendations will be discussed at EAPN’s annual Conference on 30 September.

END_OF_DOCUMENT_TOKEN_TO_BE_REPLACED 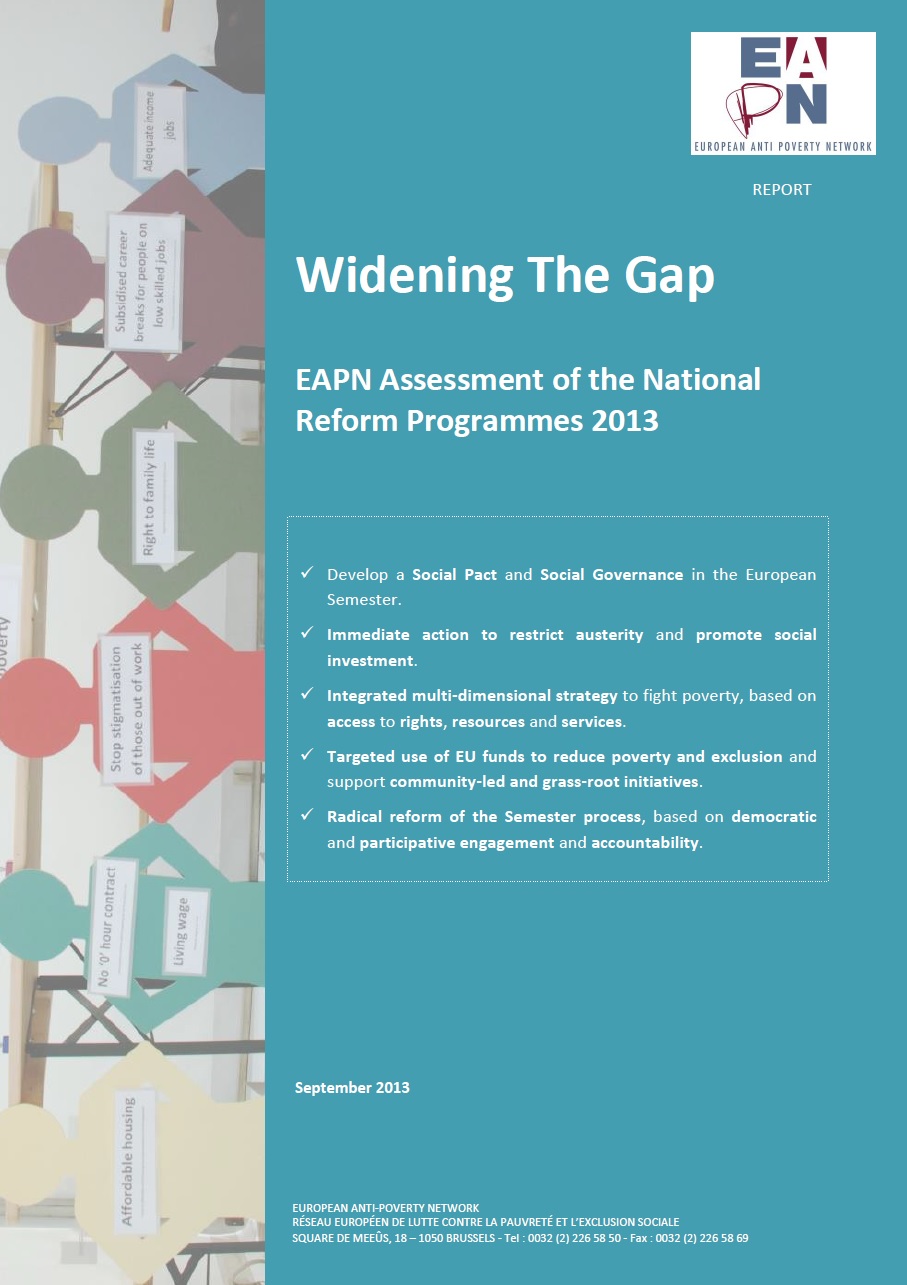 In 2013, EAPN members attempted to engage again in the NRPs, and proposed Alternative 2013 Country-Specific Recommendations based on its NRPs assessment. During this year EAPN looked for improvement – but what progress can we see? This report “Widening the Gap – EAPN Assessment of the National Reform Programmes 2013” sets out the EAPN 2013 assessment…

END_OF_DOCUMENT_TOKEN_TO_BE_REPLACED

In 2013, EAPN members attempted to engage again in the NRPs, and proposed Alternative 2013 Country-Specific Recommendations based on its NRPs assessment. During this year EAPN looked for improvement – but what progress can we see? This report “Widening the Gap – EAPN Assessment of the National Reform Programmes 2013” sets out the EAPN 2013 assessment of progress on the poverty and other targets through the European Semester in the NRPs, as well as on participation of people experiencing poverty and their organisations.

END_OF_DOCUMENT_TOKEN_TO_BE_REPLACED

EAPN attends EPC Briefing: Commissioner Andor presents his vision on the Social Dimension of the EMU

24/09 – Commissioner Andor presented his vision on the Social Dimension of the EMU to a well-attended EPC briefing, prior to the publication of the Commission Communication, due to be published on 3 October. Commissioner Andor talked of Europe facing an ‘existential crisis’, resulting from the insufficiencies of the economic framework of the EMU and the failure to take action on social imbalances. The ‘polarisation and widening gap’ between the north/centre and the peripheries in Europe, and regions were reaching a state of ‘social emergency’, as highlighted by President Barroso in his State of the Union Speech in September.

END_OF_DOCUMENT_TOKEN_TO_BE_REPLACED 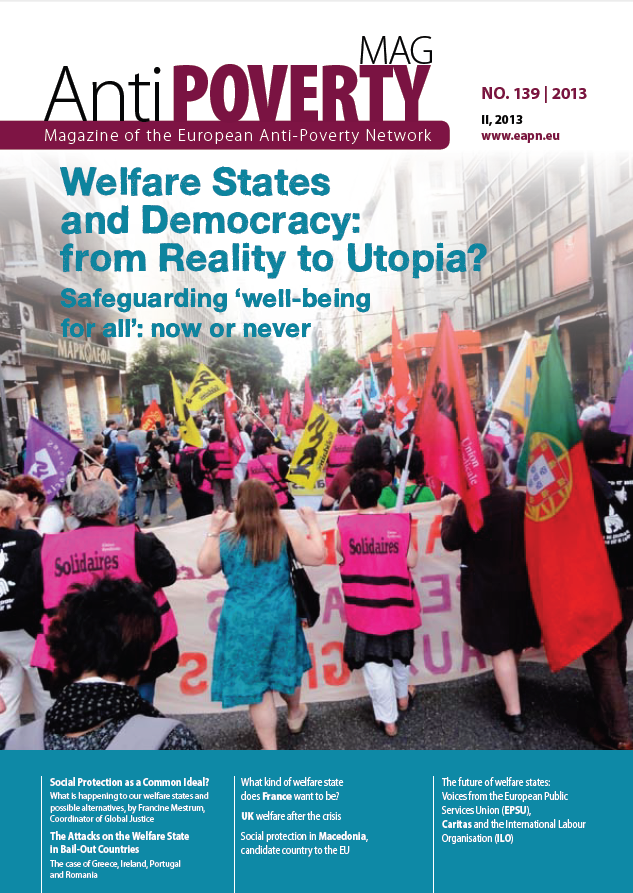 EAPN Mag 2/2013: Welfare States and Democracy: from Reality to Utopia?

Safeguarding ‘well-being for all’: now or never This new EAPN Mag discusses our welfare states, their future and the possible alternatives at our disposal, should there be political will to support them.Francine Mestrum, Coordinator of Global Social Justice, opens the discussion, on social protection as a common ideal. You then get an insight on the…