Kisa (member of EAPN Cyprus): : Immigration department appears to be accountable to no one

19/02/2014 – Kisa, a member of EAPN Cyprus, has forwarded us this editorial article by the Cyprus Mail, “Immigration department appears to be accountable to no one”, which raises the issues of systematic contempt of the Supreme Court’s decisions, violation of the rule of law and abuse of power by the Civil Registry and Migration Department (CRMD) of the Ministry of Interior of the Republic of Cyprus.

END_OF_DOCUMENT_TOKEN_TO_BE_REPLACED 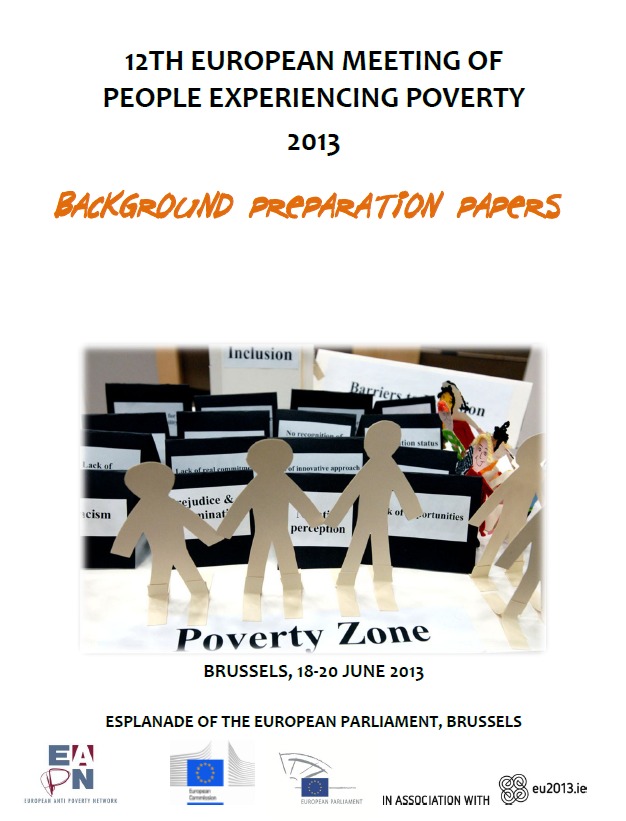 Background Reports for the 2013 Meeting of People Experiencing Poverty are out!

19/02/2014 – On the occasion of the 2013 European Meeting of People Experiencing Poverty, National delegations were asked to make preparatory reports to feed the exchanges of the Meeting. While done with little or no financial support, they represent a goldmine of information and testimonies from those carrying the greatest burden of the austerity measures, with also examples of good practices showing that choices can be made to make a positive difference.These reports were made on the basis of 1) Reference Budgets, 2) The impact of the crisis, 3) Relevant Practices.

END_OF_DOCUMENT_TOKEN_TO_BE_REPLACED

EMIN Report of Minimum Income Seminar held in Paris 9 December 2013 is out!

Four key issues emerged from the discussions at the seminar as crucial in developing effective minimum income schemes.  These are: defining adequacy and regular uprating of payments, ensuring coverage, addressing non-take-up and integrating minimum income into an active inclusion approach.  Building consensus to make progress on these four areas is crucial to the work of the EMIN project.

END_OF_DOCUMENT_TOKEN_TO_BE_REPLACED

Mark the date! Hearing in the European Parliament next 17/02!

END_OF_DOCUMENT_TOKEN_TO_BE_REPLACED

08/02/2013 – EAPN attended the ESF launch conference organised in Brussels by DG Employment on 6-7 February. This Conference was organized to present the main novelties of the ESF Regulation and help Managing authorities and other stakeholders to finalize/contribute to the design of the Operational Programmes. EAPN attended 2 workshops on the partnership principle and on active inclusion.

END_OF_DOCUMENT_TOKEN_TO_BE_REPLACED

14/02 – In many countries, demonstrations are protesting against the Hungarian law that came into effect on 15 October 2013, criminalising homeless people who “reside habitually in public premises”. t is also the case today, in Brussels, at 11am, in front of the Hungarian Embassy. This law entails that homeless people in most of the…

END_OF_DOCUMENT_TOKEN_TO_BE_REPLACED

14/02 – In many countries, demonstrations are protesting against the Hungarian law that came into effect on 15 October 2013, criminalising homeless people who “reside habitually in public premises”. t is also the case today, in Brussels, at 11am, in front of the Hungarian Embassy. This law entails that homeless people in most of the districts in Budapest and in the adjoining communes are at risk of being fined, forced to do community-service or put into jail only for staying on the streets and squares of the city. EAPN supports these demonstrations and the Steering Committee of the Hungarian Anti- Poverty Networkhas also put forward a statement, calling on the Hungarian Government to withdraw this law.

END_OF_DOCUMENT_TOKEN_TO_BE_REPLACED

2014 European Elections: EAPN calls on candidates to show their commitment

17/02 – Today, EAPN opens its blog dedicated to its campaign on the 2014 European Elections, http://electingchampionsin2014.net/. EAPN’s campaign Electing Champions for a social Europe will be launched on 04 March in the European Social Platform’s premises with a breakfast press briefing, gathering MEPs, journalists and EAPN members (national networks and European Organisations). EAPN will present its 2014 Elections manifesto, campaign objectives and activities as well as the pledge MEPs will be asked to make in fighting poverty, social exclusion and inequalities. This launch will also be a key opportunity for civil-society organisations to exchange with MEPs on their views and commitments.

END_OF_DOCUMENT_TOKEN_TO_BE_REPLACED

EAPN speaks in EP Event: Working Towards a more Inclusive and balanced European Semester: a model for trade union and civil society involvement

29/01 – The breakfast  seminar, organized by Green MEPs: Marije Cornelissen and Jean Lambert, with Eurodiachonia and CESI (independent trade unions), argued for a more democratic and participative governance in the European Semester, wanting progress on Guidelines for involving social partners and civil society in structured dialogue in the Semester.

END_OF_DOCUMENT_TOKEN_TO_BE_REPLACED 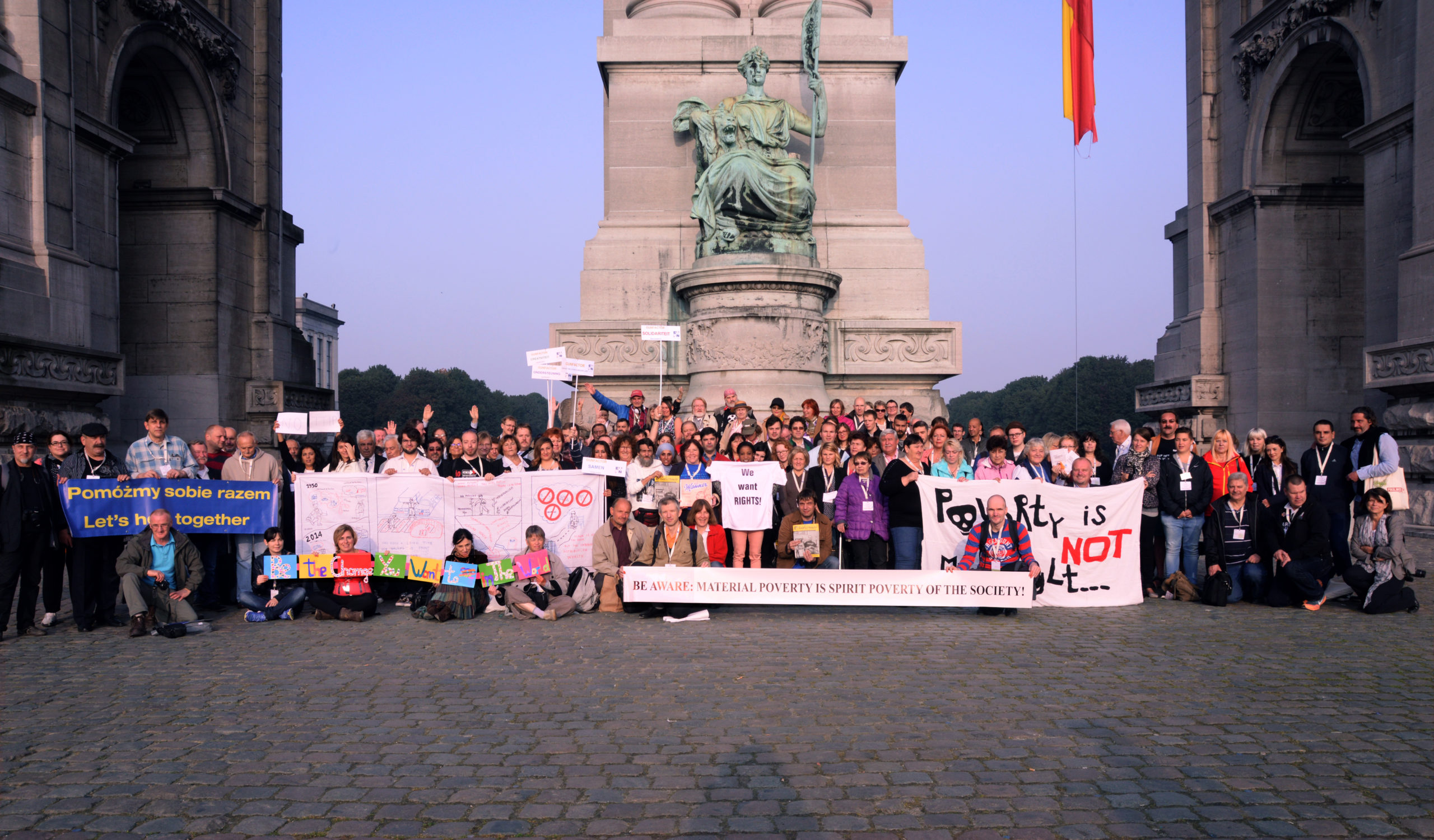 EAPN Task Force on Troika programmes and impact: This Task Force played an important role for the EAPN reflection around the devastating impact of the Troika intervention in different countries. The Task Force issued a quite impressive report called “Lifeboat or Life sentence?” EAPN campaign towards the European Parliament Elections: “Electing champions for a social…