The 2016 EESC Civil Society Prize is on Migrants 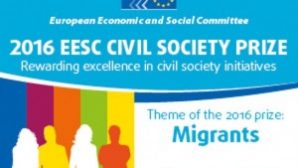 The European Economic and Social Committee (EESC) has launched the eighth edition of its Civil Society Prize: the subject of this edition is Migrants.

Europe is experiencing an unprecedented influx of refugees and migrants: those who stay have to deal with multiple challenges linked to a new start in a foreign country; they also have to cope with cultural and socio-economic barriers which are intensified by the economic crisis and the rise of particularism and nationalism.

In this context, the integration of refugees and migrants appears to be one of the main challenge that has to be faced by the EU and its Member States who strongly rely on civil society organisations to ensure the reception and assimilation of third-country nationals.

The EESC, with the 2016 Civil Society Prize, wishes to reward initiatives – undertaken by officially registered civil society organisations and/or individuals – which have been already implemented or are still ongoing, aiming at improving migrants’ lives and fostering their integration in society.

According to the EESC “integration of third-country nationals is an absolute must for our societies. A lack of integration can lead to parallel societies which may destabilize receiving countries”.

The prize has a total value of EUR 50 000 and can be shared among up to five winners.

The deadline for applications is 9 September 2016.