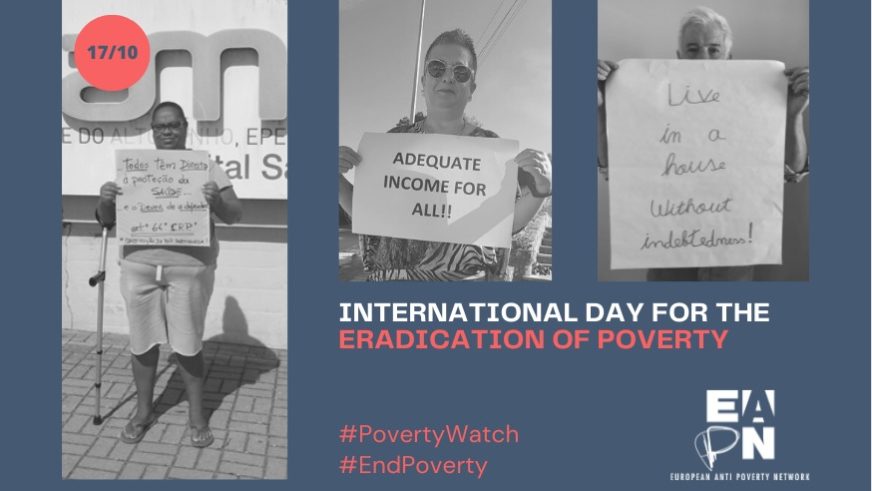 October 17 marks the International Day for the Eradication of Poverty. Now, more than ever, the situation calls for urgent action. Amid the Covid pandemic, the most vulnerable in our societies face the greatest challenges. EAPN and our members are concerned that poverty will increase to an alarming level due to the virus. We should keep working on short- and long-term strategies that will enable people to escape poverty and make sure they don’t pay the price for the current crisis.

This year we will again assemble our member’s Poverty Watches into one EU Poverty Watch. See our new published national poverty watches! These documents are the result of interaction with people who directly face poverty. The outcome showcases the main challenges and key priorities to end poverty in Europe.

Check out our visual campaign below! 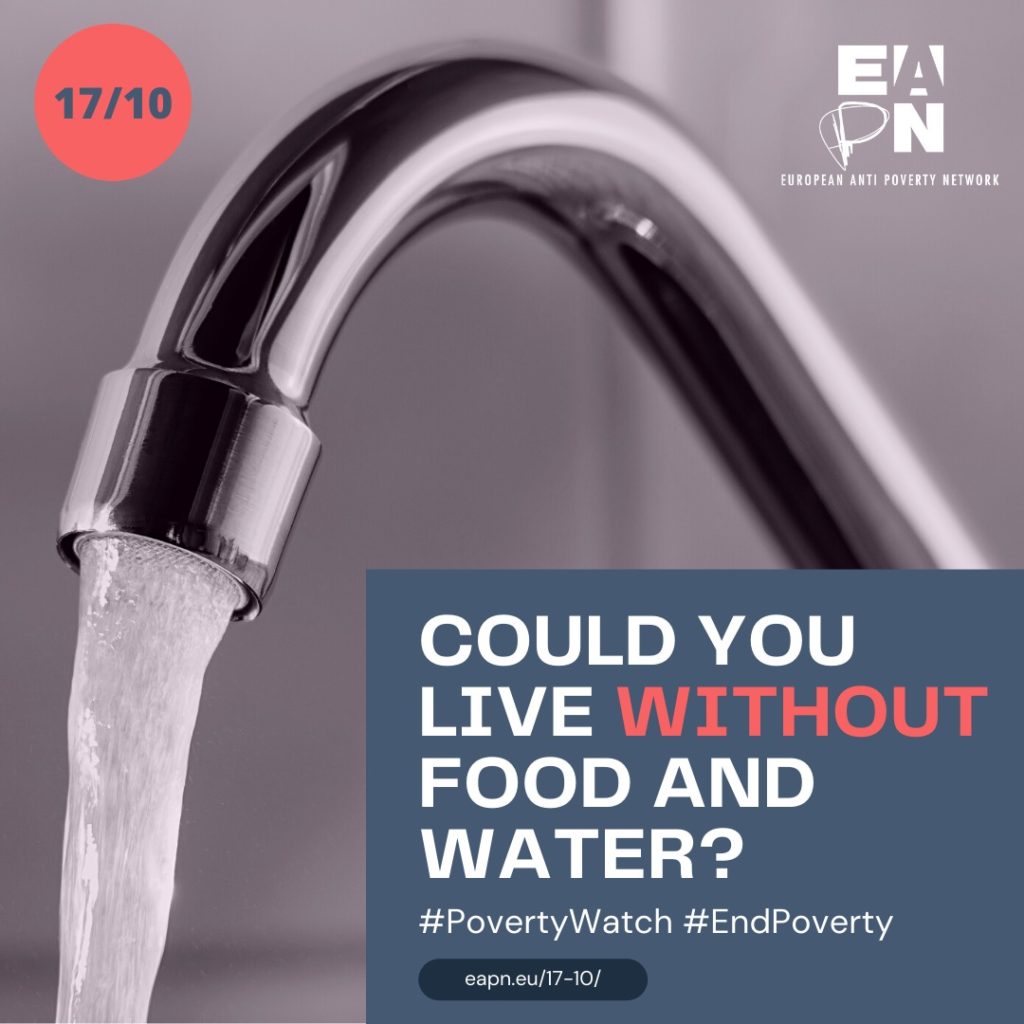 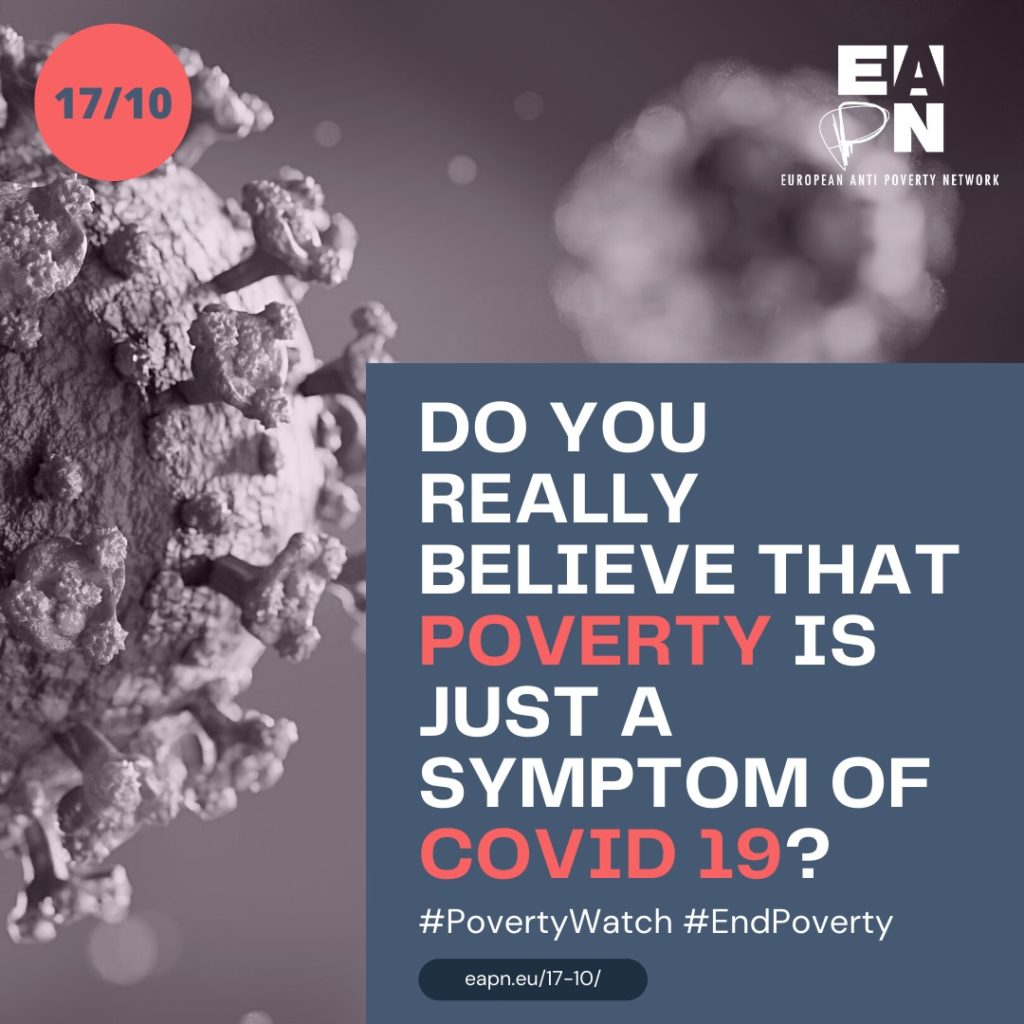 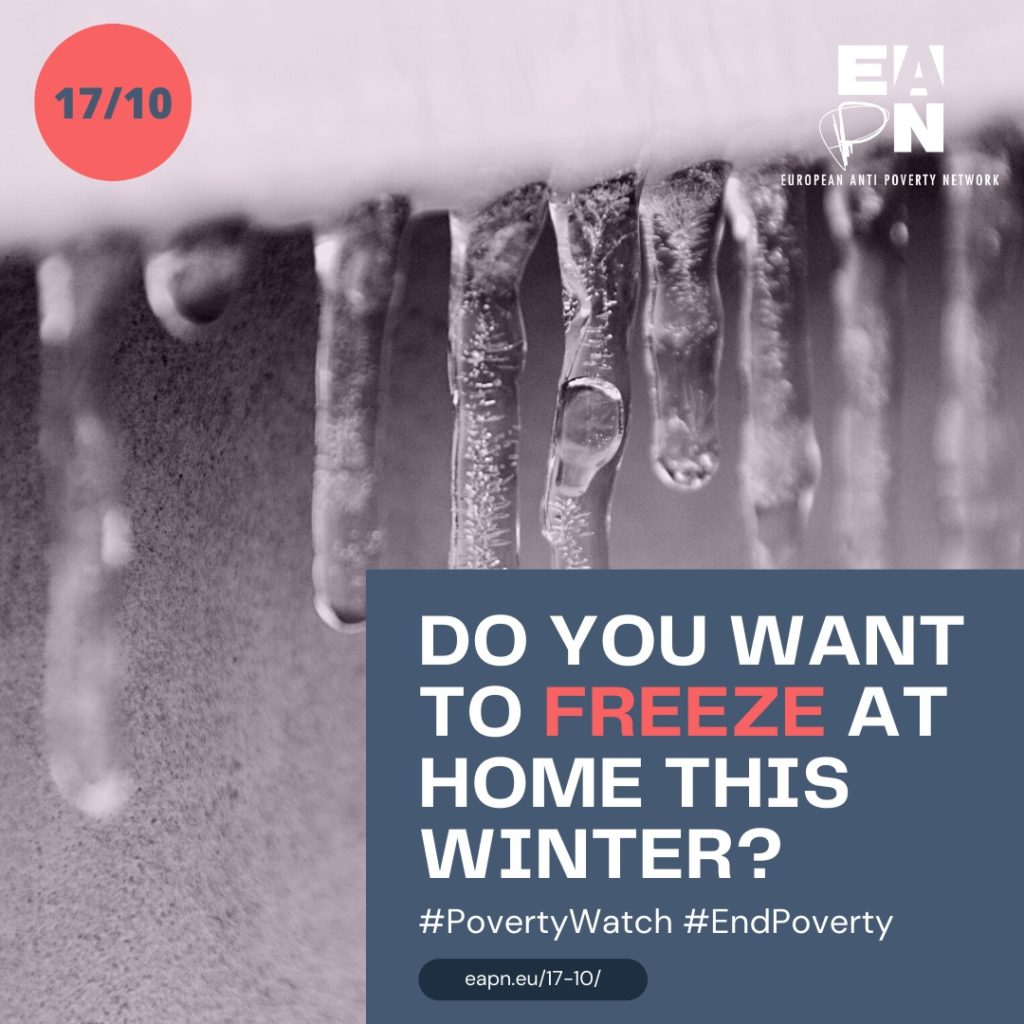 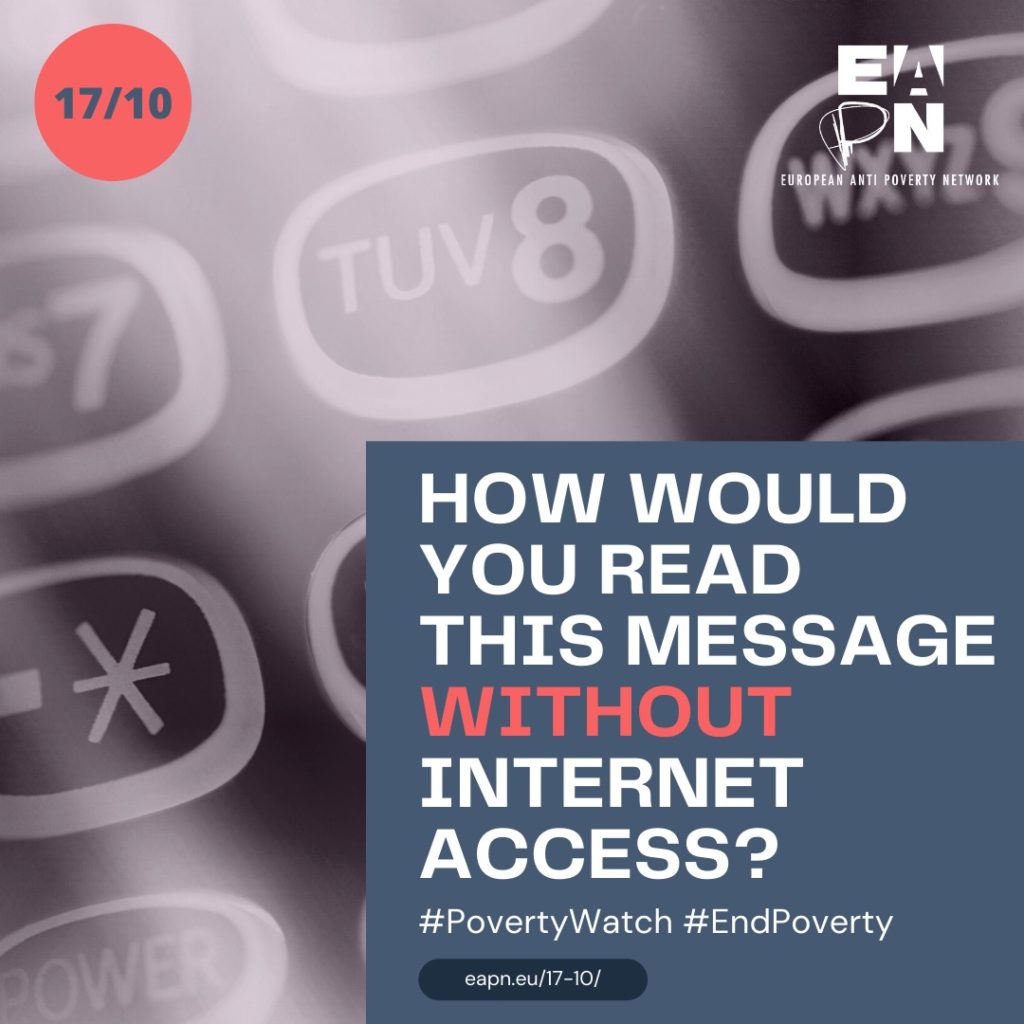 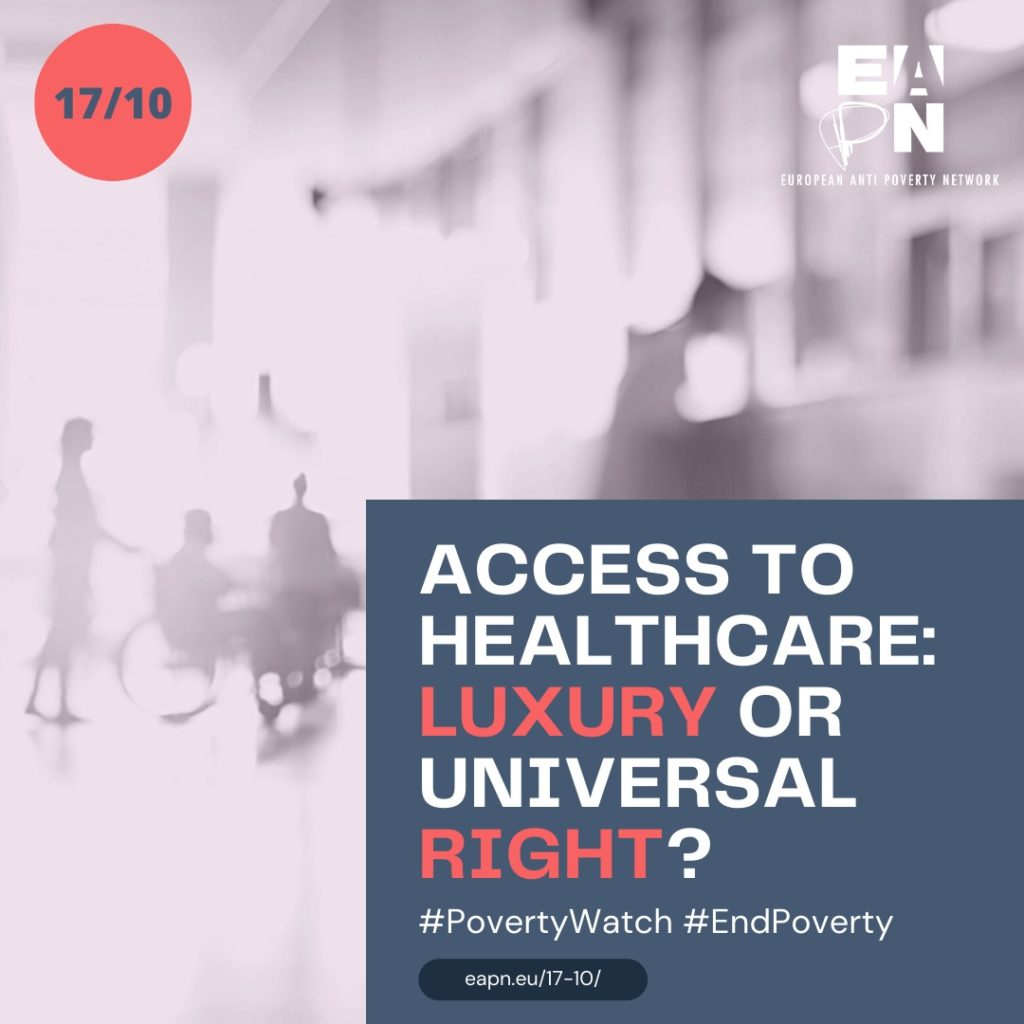 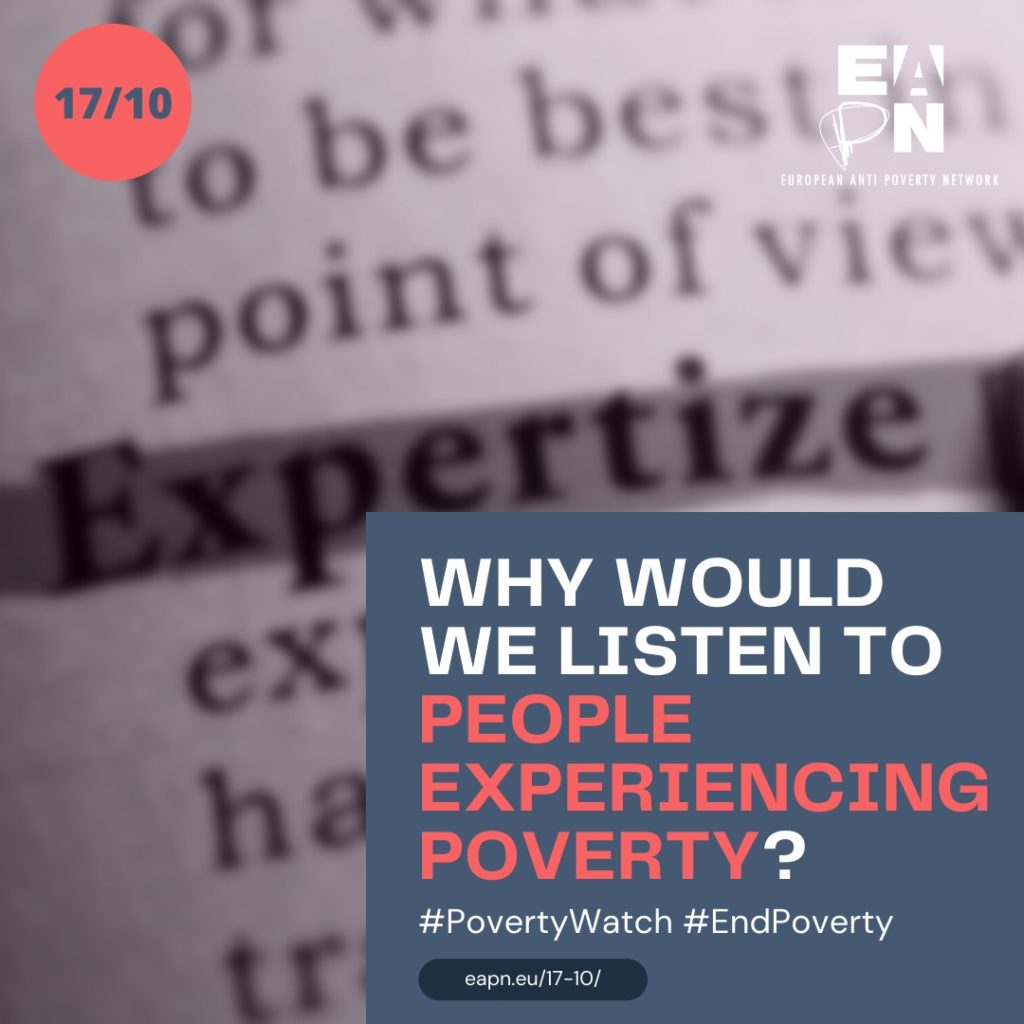 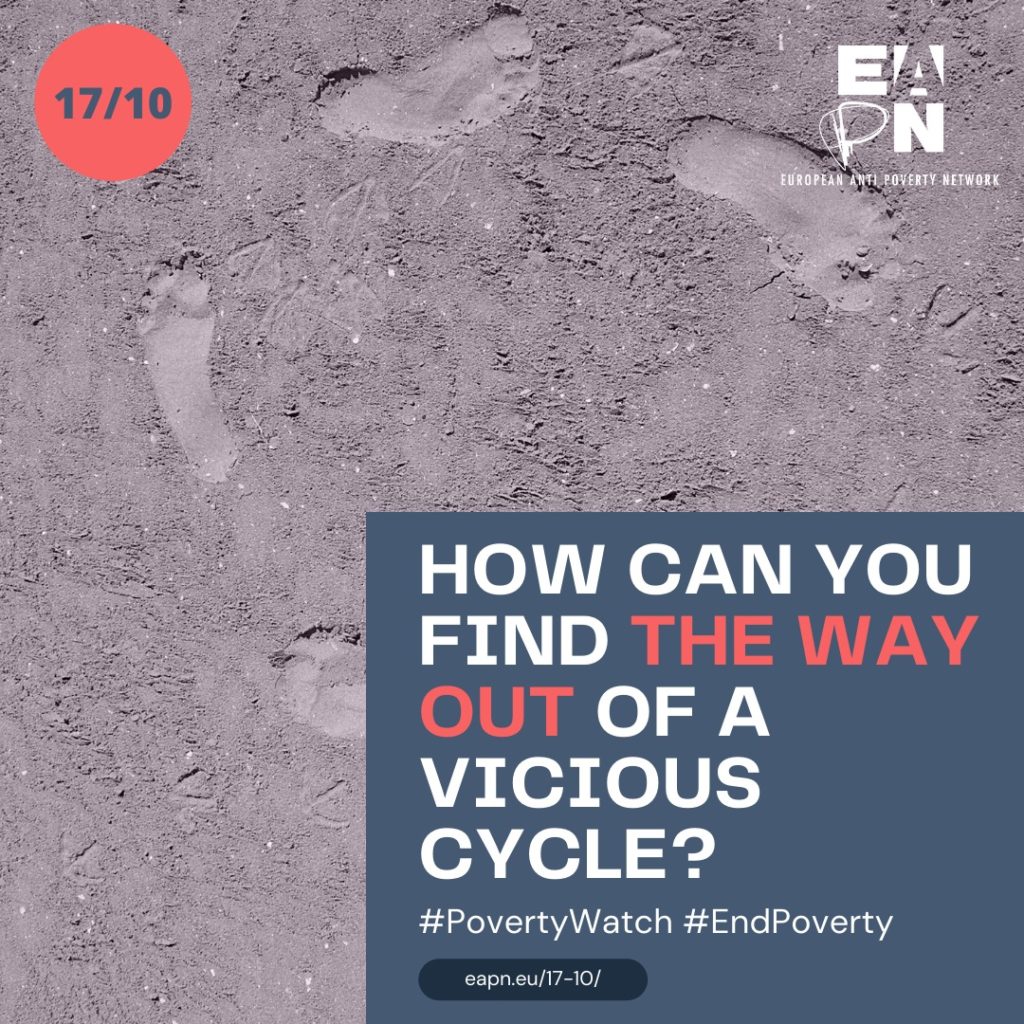 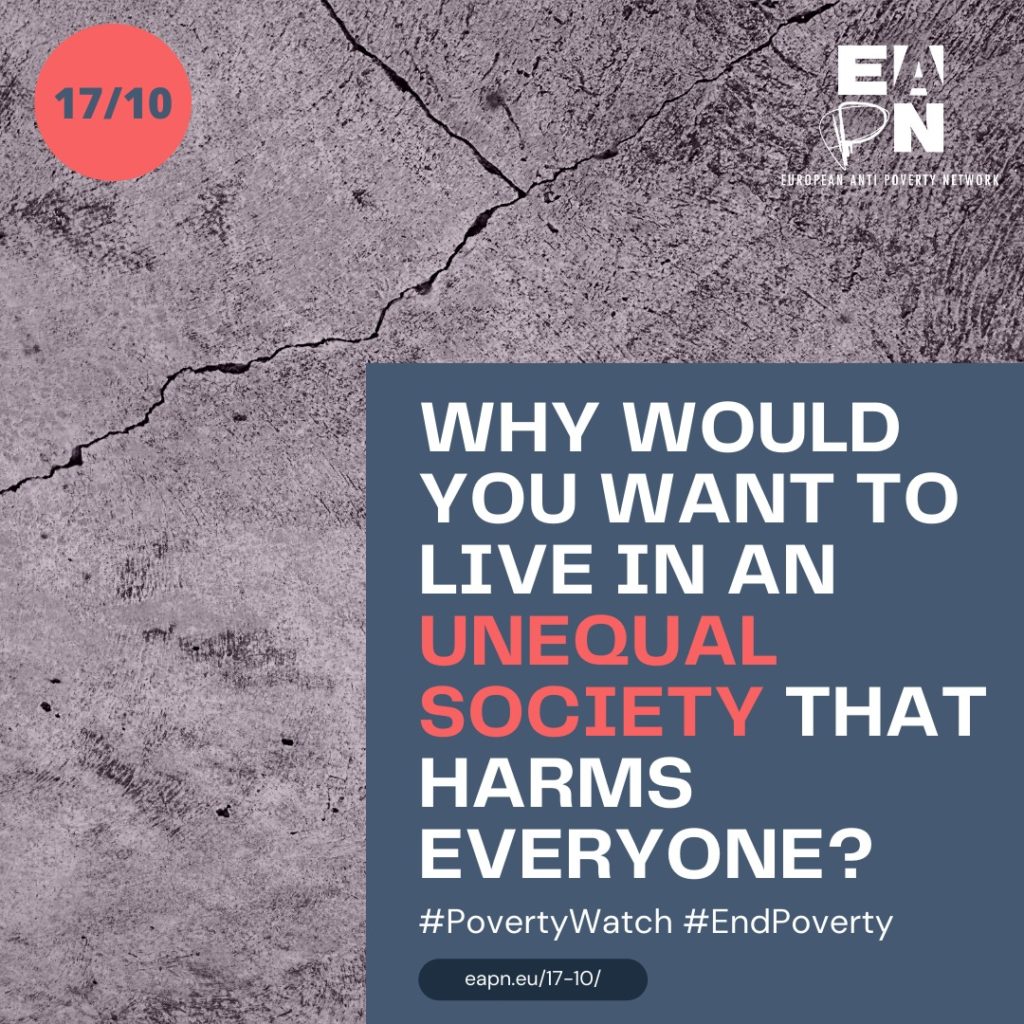 It has been a busy period as ATD Fourth World is intensifying advocacy efforts in matter of discrimination on socio-economic grounds.

About a year ago, ATD Fourth World had the idea to mobilise the EU Fundamental Rights Agency (FRA) to carry out a Europe-wide study, both to demonstrate the existence and extent of discrimination on the basis of socio-economic status and to take stock of legislation and case law in several EU countries. An updated advocacy text (in FR and EN) has been edited specifically for this purpose.

In addition they have submitted a proposal for an online event for the Fundamental Rights Forum which is being organised by the FRA on 11-12 October (which has been accepted). They have mobilised Claire Hédon, the French Rights Defender, and also Sarah Ganty, a researcher who has recently published on the subject. The one-hour workshop will take place on Monday 11 October from 14:30 to 15:30 (online, in English) and is entitled Steps forward in recognising and assessing discrimination based on socioeconomic status (https://hybrid.fundamentalrightsforum.eu/Programme?track_id=18059)
The current objective is having a European study on discrimination based on socio-economic status included in the FRA Multi-annual Framework 2023-2027.

In Belgium, ATD Fourth World cooperated recently with Olivier de Schutter, Special Rapporteur on Extreme Poverty and Human Rights, to produce a video on poverty discrimination. A dialogue between Olivier de Schutter and a group of Fourth World members having the experience of poverty was filmed and a 25-minute video will be released on 15 October (in FR and subtitled versions in English, Spanish, Dutch and German). Here is a link to a trailer: https://vimeo.com/598834609 (accessible when creating a login on vimeo).

In Belgium, various activities are organised throughout the regions. In Wallonia, the focus will be on the abolition of the cohabitant status and the social security  (https://www.rwlp.be/1710/).

In Brussels, a conference on student precariousness, which affects 1 in 3 students, is taking place (https://www.le-forum.org/news/118/7/80.000-%C3%A9tudiants-pr%C3%A9caires-) , as well as a day focused on citizen participation (https://www.brusselsplatformarmoede.be/nl/17-oktober-2021).

In Flanders, the focus is on participation and listening to people experiencing poverty (https://netwerktegenarmoede.be/nl/17-oktober-2021).

Within BAPN, a new report has been published on the individualised social integration project, which is more a tool for control and sanction than for help (https://www.bapn.be/fr/17octobre).”

The pandemic has exposed the digital divide in our societies, which particularly affect elderly citizens and people suffering with chronic illnesses.

EAPN Finland have created some short videos, where this topic is discussed.

Discussion on the Digital Divide during the Pandemic

On the occasion of the 17th of October – International Day for the Eradication of Poverty, EAPN Portugal organizes, together with several local/district/national partners, a set of various activities that contribute to raising awareness on these themes, calling for participation and activism, involving different areas and sectors of civil society and covering all audiences, in particular, people living in poverty and/or social exclusion This year, the activities will take place between the 11th and 24th of October with a national program that includes all the activities that will be developed in the territories. You can access the national program at the following link: https://eapn.pt/17out

EAPN Pt will launch, within the scope of the October 17th Celebrations, a National Awareness Campaign on the Right to Housing. This is also the central theme of the National Forum and was chosen in the context of the investment that will be made in the short term under the RRP  in Local Housing Strategies. In order to achieve the objectives defined in the RRP, the major players/stakeholders will be the Local Authorities, hence our Campaign proposal to focus on the accountability of recently elected municipal Executives. The Campaign (in attachment, though under review) consists in delivering/sending a brick to the 308 Mayors, congratulating them on their recent election and, on the other hand, calling them to their responsibility in complying with Article 65 of the Constitution. The brick is a small size of a real brick used housing construction, will have a strong symbolic component, constituting the “first stone” of much work that is planned to guarantee this right. The idea is to deliver by hand to some Mayors, preferentially to the electing Chambers of the district capitals. At the time of delivery, as far as possible, the members of the LLC (Local Citizens Council of EAPN PT) and respective Boards of the District General Councils will be present.

The Campaign will be launched on October 18th. The moment will be recorded through image and audio (photos and videos) to post on social media (Facebook, Insta, Twitter). We also believe that this Campaign will have a great impact on the current political context and we will be pioneers in alerting to this serious national problem and to the need for these processes to be participated and monitored.  The brick will be delivered by hand whenever possible, the remainder will be sent by post to the city councils Mayors.

EAPN Portugal believes that it is essential to respond to the inequalities in housing that some Portuguese citizens are still experiencing. It is based on this context that we consider it urgent to take action in this area, guaranteeing access to housing, investing in the definition of articulated intervention measures and a local action strategy to overturn existing housing needs. This is also the feeling and will of the citizens who are part of the Local Councils of EAPN Portugal. A will that has been manifested in recent years and that has contributed to develop a set of debates, both nationally and at European level (eg the European PEP Meeting in 2019 ). This year the National Forum intends to promote critical reflection on the part of citizens on this topic and encourage participatory dialogue between the entities responsible for these matters and the citizens themselves, bearing in mind the existing measures, but also their recommendations and suggestions as people who daily experience the challenges to have access to a house. In addition to this reflection, we will also hold the Award Ceremony for the initiative promoted by EAPN Portugal: Journalism Award: “Analyzing Poverty in the Press” – III Edition.

It will also be presented with testimonies what poverty is and how the fight against poverty and social exclusion should be, through the Documentary “Eu Sou” (“I AM”) and an exhibition of photographs that reflect the testimonies of citizens who had experienced or are experiencing situations of vulnerability. Bearing in mind that any decision-making process in the definition of a National Strategy for the Fight against Poverty must be participated. Other moments of the Forum: the Message of EAPN Portugal for the 17th of October will be read, a the presentation of a publication that reflects the recommendations and principles of PEP, claiming this struggle as a national goal.

To accompany Slovakia’s Poverty watch, a 15-minute documentary also presents some of their work (in Slovak).

On the Slovindia YouTube channel, a special video has also been made for 1710!