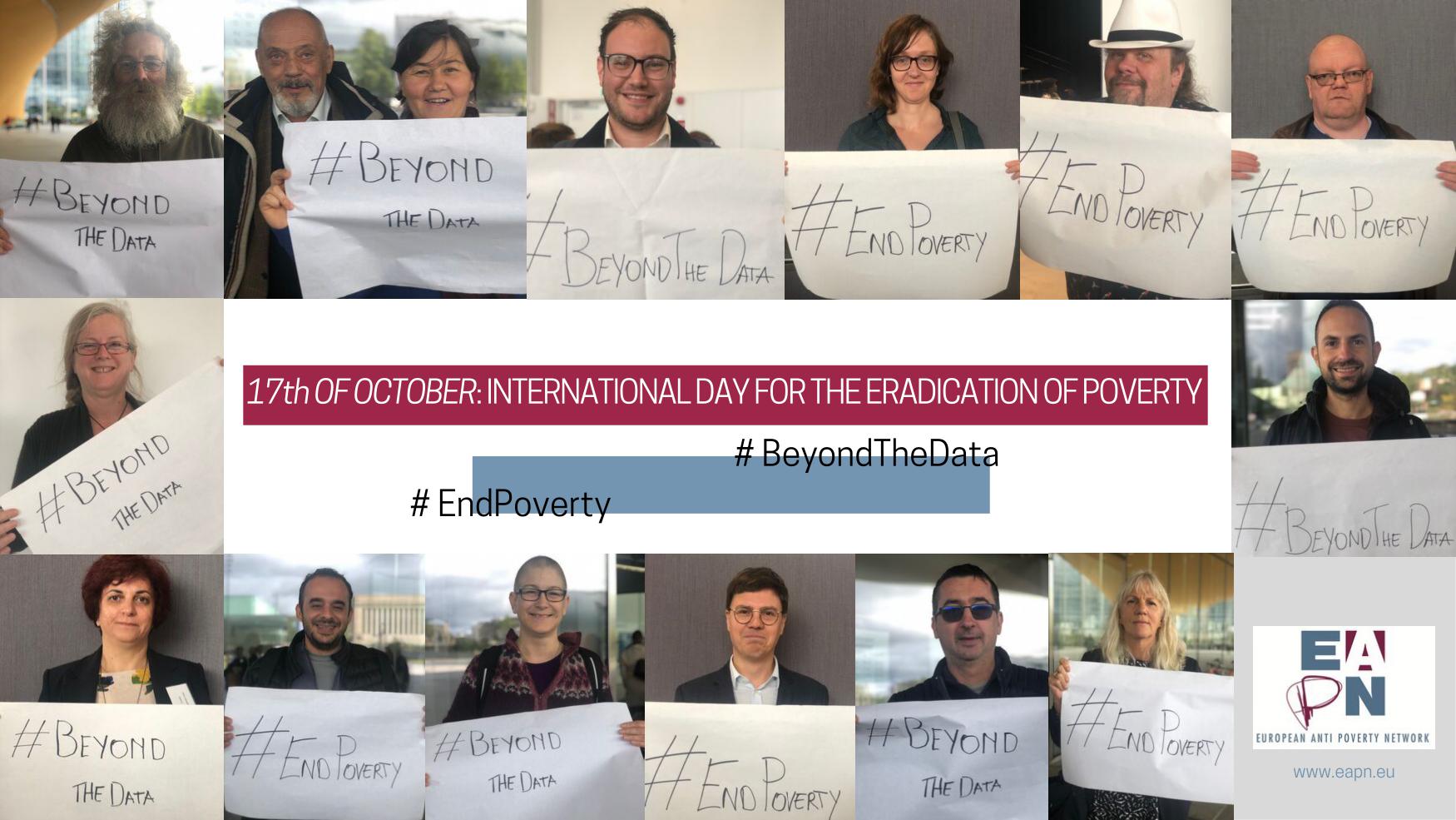 17 of October marked the International Day for the Eradication of Poverty! This year we launcied the campaign #BeyondTheData that aimed to show the realities hidden behind the numbers.

EAPN hosted an EP Roundtable on the reality of poverty in Europe with the European Parliament’s MEPs Cindy Franssen (EPP) and Pierfrancesco Majorino (S&D) on the 16th. This Roundtable was organised together with ATD Fourth World, IFSW & Emmaus Europe and was live-streamed on Facebook.

This meeting aimed to be a moment of reflection for the proper contextualization of the news and a reinforcement of the civic citizenship of the reality that surrounds them, in a comprehensive and objective way. Poverty, exclusion and inequality are surrounded by stigma, prejudice and myths associated with these issues that place people in a situation of great social vulnerability. The relationship between the media and citizens is important because of their role in portraying the phenomena of poverty and social exclusion. Efforts need to be made to ensure that these phenomena are neutrally represented in the right to information and in the prevention of any form of discrimination in the news that may foster or promote the risk of reinforcing existing stereotypes and prejudices.

On the 16th there was a formal moment to reward the Journalists that had been awarded with the Journalism prize.

“Words with body and soul. Because poverty is not fiction ”

EAPN Portugal launched a national awareness campaign on the 17th of October, International Day for the Eradication of Poverty. The “body and soul” of the campaign’s protagonists are real people who live or have lived in situations of poverty and social exclusion, with whom EAPN Portugal works for a few years and are part of the National Council of Citizens. This initiative included small vídeos with the testimonies of Natália Fonte, from Figueira da Foz; Jaime Filipe, from Setúbal; Beatriz Morais, from Leiria; Higino Costa, from Lisbon; Neide Conceição from Vila Real; José Belchior from Setúbal and Francisco Rico from Aveiro.

Check out the info graphics produced by EAPN Finland based on their Poverty Watch!

EAPN-Latvia organized a discussion on the 17th of October in the House of European Union in Riga. Several topics will be discussed such as the need of a decent income for all population groups, access to education, access to health services and support for the most deprived persons as well as the national Development Plan 2021-2027 project.

As part of the International Day for the Eradication of Poverty, the European Network for the Fight against Poverty and Social Exclusion in the Spanish State (EAPN-ES) presented its 9th Report ‘The State of Poverty. Monitoring of the poverty and social exclusion indicator in Spain 2008 – 2018 ‘ on the 16th of October. On the 17th, and with the aim of making visible and activating the fight against poverty, the EAPN Spain organized a commemorative day on the 17th October in the Ministry of Health, Consumption and Social Welfare (Paseo del Prado, 18-20, 28014 Madrid), with the presence of Minister María Luisa Carcedo.

Slovak Network Against Poverty (SAPN) with other organizations organized a conference on Working poverty – myth or real reality in Slovak families? This conference took place in the Municipal Office on the 17 of October 2019 and was intended as a dialogue between poverty experts, people with experience of poverty (PeP), trade unionists and public administration experts (MoLSA and R, MoEYS) responsible for the relevant public policy area and representatives of civil society. It should result in a recommendation Under the Europe 2020 Strategy.

Check out the video made by the Slovak Network Against Poverty for the 17th!

Stichting Onze DROOM and EAPN Nederland organized a Workshop “Becoming visible” on 17 October 2019 from 12.00 – 16.00 at Onze DROOM, Meidoornlaan 18b, Brummen. Read the programme below for more details:

Network against poverty also organized several activities on the 17th of October. Read the programme below to know more about it.

On the 17th October, the Macedonian Anti-Poverty Network conducted a meeting with Ministry of labor and social protection followed by a press conference and a walk to the People experiencing poverty Conference. During the latter, working groups discussed different topics related to Minimal income, Social and health services and unemployment/work activation. The outcome of the working groups resulted in direct questions that will be addressed to the decision makers on 18th October. Panelists were representatives from the Ministry for social labor and social affairs, the local centers for social work, Employment agency, UNFPA, biggest national union and other relevant stakeholders. They will present conclusions from the working groups, and on the last day they will produce a “Declaration on poor and social excluded people“.

EAPN Lithuania hosted a PeP event on the 17th of October. The goal of this event was to discuss the difficulties that Lithuanian are facing to enter the labour market. The minister Linas Kukuraitis and other people from the Ministry of Social Security and Labor and from the Government of the Republic of Lithuania attended the event as well as 30 people that are experiencing poverty.

Check out the Elosztó project whose goal is to bring together the knowledgeable to deliver effective solutions to the challenges of energy poverty.