17 October – International Day for the Eradication of Poverty | Stop Poverty 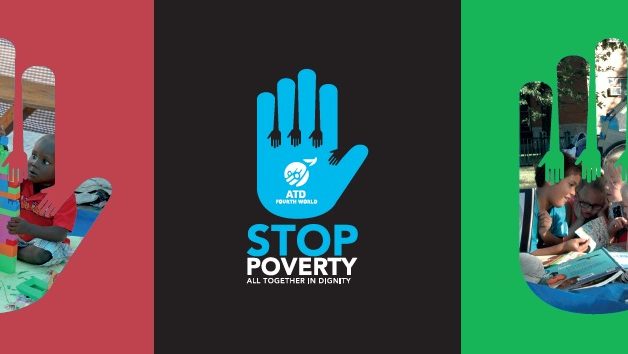 October 17 is the International Day for the Eradication of Poverty. In 2017 the European Anti-Poverty Network (EAPN) calls to Stop Poverty! Tackling poverty is about ensuring we can all participate in society. To not do so, is a violation of human rights and all people and our political institutions have a duty to work for the realisation of a world free of poverty and social exclusion.

For 30 years, people in poverty all over the world have come together on the same date to speak out against poverty. This year we are excited to unite with our member ATD Fourth World’s #StopPoverty campaign and offer a new way to join in the World day for Overcoming Poverty. No matter where in the world you are if you have an internet connection you can watch the day live on the StopPoverty website – www.poverty-stop.org.  A day of online programming in three languages, showing videos from events that were part of the campaign; on ATD Fourth World projects around the world that show how, when we come together, poverty can be overcome and real victories can be achieved, and clips from commemorations which take place on October 17, 2017, itself in Manila, Dakar, Parks, New York, Guatemala City, and possibly elsewhere.

This is a great chance to join in yourself – but we hope you’ll use it as a chance to bring friends and family together as well. See the website for great guides on how to set up your own activities or get involved, and a wealth of information!

We are adding our voice to the StopPoverty social media campaign, including our own post in support of a Twitter Thunderclap on the day!

We hope you will join us!

EAPN Director, Leo Williams, is speaking at an event in the afternoon of 17 October organised by the European Parliament’s Extreme Poverty & Human Rights Intergroup. The event will be opened by Antonio Tajani, President of the Parliament & Ambassador Clyde Kull, Deputy Permanent Representative of Estonia. EAPN will speak in a panel alongside ATD Fourth World delegations of people experiencing poverty from the Netherlands & Belgium, a representative of another of our member organisations (FEANTSA), and the European Commission: Answering the Call of October 17 to end poverty: A path toward peaceful and inclusive societies.

You can register to this event here. It will end at 17:00 with a ceremony at the stone in honor of the victims of extreme poverty. #EndPoverty #StopPoverty

EAPN members are organising many activities for the day

The Poverty Alliance is organising Challenge Poverty Week #CPW17  from 15 – 21 October – “Challenge Poverty in Scotland? Aye, we can!” – gathering all organisations tackling poverty to showcase their initiatives across Scotland to political leaders. Activities can be found on the Calendar of Activities.   If you have an activity planned in Scotland, no matter how big or small, taking place online or offline, you can contact Rachel Thomson or phone +44 (0)141 353 0440.

EAPN Finland participates in the “Night of the Homelessness” with around 30 happenings all over the country, making it again the biggest nationwide demonstration in the social field. More information is here.

EAPN Nederland will organise a “Crossing the poverty line” action, inviting the press to be there. The action – and national members’ activities will be using the hashtag #EndPoverty

EAPN Spain will develop a campaign in cooperation with the Spanish Poverty Alliance.

The Walloon Network Against Poverty is planning a whole range of debates, films, theatre, and exhibitions in Namur. See the full programme here.

There is also a local initiative of Lutte Solidarité Travail, of an action around the Walloon parliament: On nous rend transparent mais nous résistons tous les jours à la misère

A mobilisation on how to fight rising inequalities by the Brussels Forum against Inequalities (le Forum Bruxelles contre les Inégalités): Hors Circuit

A political march across the city, organised by the Federation of Social Services and built with a large number of partners, including the Walloon Network Against Poverty and the two Brussels Networks against Poverty. The march will be punctuated by interventions to raise the visiblity of poverty, including at the European Parliament on poverty in Europe: Rendre visible l’invisible

A festive evening of workshops by ATD Fourth World to discover the forms of resistance of people experiencing poverty. Around 30 organisations are uniting to affirm that a society of more solidarity cannot be built wthout the participation of the most excluded: On a une trop bonne idée

EAPN Portugal has been set up throughout the country, Local Citizens’ Councils, made up of citizens who have lived or live in social disadvantage, who are committed to the organization’s objectives and wish to contribute voluntarily to the fight against poverty and social exclusion.

In this context, EAPN PT is organizing at national level:

Please check EAPN Portugal‘s website to keep up to date.