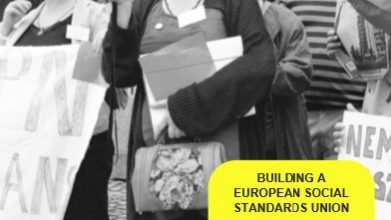 Building a European Social Standards Union – what role for the European Semester?

On 7 December 2017, EAPN and MEPs Sergio Gutiérrez Prieto (S&D) and Jean Lambert (Greens/EFA) jointly hosted an event in the European Parliament to see how progress can be made on social rights, social standards and poverty reduction, through the main EU coordination instrument – the European Semester – in the context of 1 in 4 of the population (118 million people) still at risk of poverty and social exclusion in the EU.

It came at a timely moment, following President Juncker’s State of the Union address, calling for a “European Union of Social Standards”, the Inter-Institutional Proclamation on the European Pillar of Social Rights, and the recent adoption of the 2018 Annual Growth Survey and Draft Joint Employment Report. The key questions that were discussed were: How well is the European Semester performing on social rights and poverty reduction? How will the European Pillar of Social Rights be mainstreamed? What changes should be made to transform the Semester into a balanced economic and social instrument? How will grass-root actors, including people experiencing poverty, be involved?

The seminar opened with an exchange of views between stakeholders and the European Parliament, assessing the current performance of the Semester, and went on to debate what the way forward should be, including with the European Commission.

Some of the key conclusions from the debate were:

(a full report can be found below)

Chair Leo Williams (EAPN Director) asked the panel to give their thoughts on how the Semester is delivering Social Rights on the ground. Jean Lambert (MEP, Greens/EFA) made the case that the EU needs to get serious about engaging people on the ground in delivering Social Rights and that political parties have a role to play in encouraging Members of Parliament in this. “The rhetoric in this year’s AGS looks good, but how much of it actually matches up to realities on the ground?”

Michael Mackey (Board of EAPN Ireland with direct experience of poverty) gave a reality check of a missing social right to housing, and spoke about prohibitive housing prices and homelessness with so many buildings boarded up.

Paul Ginnell (Chair EAPN EU Inclusion Strategies Group) presented the main findings of EAPN’s Assessment of this year’s National Reform Programmes: Social Rights or Social Plight? Despite some more focus on poverty and some examples of strategic approaches being taken to tackle poverty and for some key groups in certain countries, the EU Poverty Target for 2020 still has low visibility, with little sign of social rights being mainstreamed. Structural issues remain untackled, with macroeconomic goals focused on efficiency and austerity continuing to undermine investment in welfare states. Participation of NGOs and people in poverty is still a key challenge, although some progress has been made.  Paul also spoke about the Better Europe Alliance’s results of their engagement in the Semester in Ireland with the support of the European Semester Officer.

Yana Toom (MEP ALDE who was Rapporteur on the European Semester in 2017) welcomed the European Pillar of Social Rights and stressed that the majority of MEPs do take poverty seriously – but more efforts are needed to achieve ambitious social standards – including adequate minimum income schemes as one area she sees scope for the European Parliament to really act.

Heather Roy (Secretary General of Eurodiaconia) worries that Civil Society has been airbrushed from the European Semester & the implementation of the Pillar of Social Rights as there is simply no mention of it! It is good that the Pillar is referred to as a social compass, but members in her organisation worry in which direction the compass will point! They hope upwards but worry that countries will diverge. A particular concern is the current contradiction between economic and social objectives, with fiscal consolidation undermining social rights. There needs to be more social investment, particularly in social services and support for people to live in dignity. This investment should not be counted as a cost.

After the first panel discussion and debate with the audience, Maria João Rodrigues (Vice-President of S&D Group and President of FEPS) kicked off the second panel on What way forward? by insisting that the Social Pillar now needs an Action Plan and implementation through the European Semester, as a key instrument to change the direction of economic and social policy. She highlighted a number of tools to use to do this including changes to the scoreboard, the country reports and CSRs but also the need for hard law. People must be protected throughout the lifecycle, in and out of work, and the scandal of in-work poverty needs to end. “We have fought for so long.., and now there is a light at the end of the tunnel. The Pillar is there, but know that there are many actors who will be against it… I count on civil society to seize this moment to continue to push, including by putting pressure at the national level on Member States, to influence the EU institutions.”

EAPN Policy Coordinator Sian Jones, presented EAPN’s proposals for the implementation of the Social Rights Pillar and the fight against poverty and social exclusion in the European Union, through and beyond the European Semester. Despite appearances of the balance tipping towards the social domain, the same three economic priorities around stability and growth remain dominant. Our next steps would be:

Barbara Kauffmann (Director of Employment & Social Governance, DG Employment) presented some current results of poverty indicators from the social scoreboard and stressed that the European Commission is not happy with the lack of progress on poverty and is working very hard to mainstream the Social Pillar principles, but this will take time. She also stressed that the Commission welcomes substantive inputs from civil society, and European Semester Officers are encouraged to be more proactive. The SDGs are currently being analysed in terms of how they can fit with the Pillar principles and indicators, but they are trying to keep the focus on the Europe 2020 targets.

Rait Kuuse (Deputy Secretary General on Social Policy, Estonian Ministry for Social Affairs) noted that we should not only look at social policies, but also at economic policies and others which impact social development. The Estonian Presidency proposed important Council Conclusions on the future of work and access to social security, on the gender gap in education and labour market, and on enhancing community-based support for independent living.

Leo Williams concluded by calling on civil society to push for implementation at national level and hold leaders to account to really make a difference to people’s lives.

This event is supported by the European Union Programme for Employment and Social Innovation “EaSI” (2014-2020). The information contained does not necessarily reflect the position or opinion of the European Commission. For further information please consult: http://ec.europa.eu/social/easi.