EAPN Assessment Critical of Europe 2020: Poverty and Inequality at an All Time high 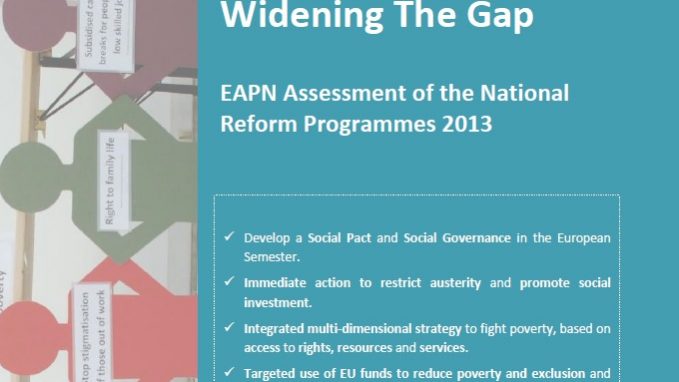 “We have a social crisis that EU leaders pretend to ignore. Poverty and inequality rates have increased when they should have gone down. We need change, not more of the same with real political leadership and coherent social and economic policies that give priority to human beings rather than this neo-liberal economic straightjacket that is widening the gap between us – the rich and the poor, the North and the South. The EU is likely to pay the price at the coming elections”, said Sergio Aires, President of EAPN.

“The continuing lack of commitment to democratic engagement or viable participation of grassroots stakeholders in the plans (NRPs) raises serious questions about the democratic accountability of the European Semester process”, he added.

2013 has seen a worsening of the social impact of the crisis by austerity measures, particularly reflected in rising unemployment and poverty levels, with unemployment reaching 23.7% and poverty nearly 120 million(1) , according to available data. The Europe 2020 poverty target to reduce poverty by at least 20 million by 2020, appears to be in tatters, with poverty and exclusion increasing by nearly 4 million in the last year, and a shortfall of 8 million even on the national targets set by Member States (MS) to contribute to the EU target.

“EAPN members have tried to engage in constructive dialogue with national governments as part of this Europe 2020/Semester process – believing that they would be welcomed as equal partners, but this is just not happening. The process is in danger of being abandoned by stakeholders as an empty shell, which turns its back on the very people it is supposed to represent”, added Barbara Helfferich, Director of EAPN.

The key policy driver for the European Semester continues to be the European Commission’s Annual Growth Survey (AGS) which, in 2013, did not focus on the failure of the social targets but instead underlined the need for continuity rather than change, supporting the same key 5 priorities, including ‘growth-friendly fiscal consolidation’ and in the social field: tackling ‘unemployment and the social consequences of the Crisis’, with few new proposals. The loss of an explicit Annual Progress Report reviewing the Europe 2020 targets, is a major setback, undermining the visibility of the targets and the credibility of the Europe 2020 targets as a driver in the European Semester.

Notes to the editor

EAPN ASSESSMENT OF THE NATIONAL REFORM PROGRAMMES 2013 “WIDENING THE GAP”

2013 marked the 3rd Round of National Reform Programmes, since the launch of the Europe 2020 Strategy in 2010. EAPN has engaged in this process every year with its members by directly inputting to the National Reform Programmes as well as monitoring and reviewing the outcomes, regarding the social (poverty, employment, education) targets as well as the participation of people experiencing poverty and their organisations in the decision-making processes of the Europe 2020 Strategy.

EAPN DEBATE ON EUROPE 2020 – WHAT PROGRESS ON POVERTY AND PARTICIPATION? 30 SEPTEMBER 2013

Reviewing progress on Europe 2020’s poverty target and commitments to stakeholder dialogue, in the context of increasing austerity and an EU democratic/participative deficit – Click here to see the webpage of the event