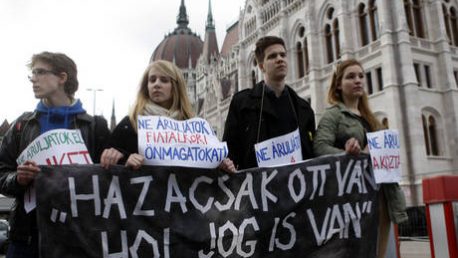 Since 2010, the Hungarian Government has taken several steps which weaken institutions of democratic control that have received widespread international criticism. These changes have been deeply affecting the system of checks and balances, the juridical including the scope of authority of the constitutional Court, the freedom of media, the election system etc.

EAPN wants to draw attention to the ‘anti-poor’ measures and policies of the Hungarian government which have received less international publicity. In parallel with the weakening of democracy, key elements of the social safety net and social inclusion policies have been gradually weakened or eliminated, with benefits frozen or cut back. Public work has become the domain of the Minister of Interior and is used as a ‘policing’ weapon. Social assistance is conditional on having done public work, on means tests and behavioural tests including the behaviour of children (e.g. truancy).

Due to the restrictions on entitlement to social benefits, over half of the 600.000 jobless are now without any kind of social support in Hungary. As a result, poverty rates have increased, particularly child poverty. Hungary now has one of the highest rates of material deprivation in the EU. ‘Activation’ is explicitly understood and applied as a means to control and punish, instead of seeking to provide adequate income support, access to essential services and supportive pathways to employment, as requested by the EU through its Active Inclusion Recommendation and its poverty-reduction target.

With the recent amendments to the Fundamental Law, local governments now have the power to define rough sleeping in public as a punishable criminal offence. This is another serious step in the criminalisation of homeless people, in a country where social housing is not available for those in real need.

EAPN is also concerned about the amendment redefining the notion of family (based on the “marriage of a man and a woman”) for the impact it will have on the rights, not only of LGBT people, but everybody committed to live together and raising children outside this definition of family.

This press statement follows the Executive Committee of EAPN, held from 14 to 16 March in Brussels, where representatives of EAPN members, national anti-poverty networks and European Organisations, discussed the situation in Hungary with a special focus on the recent amendments to the Fundamental Law approved by the National Assembly of Hungary on Monday 11th March.

“During the period 2007-2013, EU funding to Hungary has been about € 33 billion. This enormous sum of EU taxpayers’ money aimed at contributing to achieve the economic, social and environmental goals of the country set forth in various EU and national documents. However there is ample evidence that EU funding, instead of improving the situation, is having a devastating effect on Hungarian society and economy. In spite of the EU’s good intentions, inappropriate rules concerning the use of EU money, coupled with weak or non-existent enforcement of the EU and national commitments, lead to the result that EU money in Hungary is reducing economic competitiveness of the country, increasing social inequalities and undermining democracy.

This is the conclusion of a paper prepared by the Clean Air Action Group, a national federation of Hungarian environmental NGOs.

The European Environmental Bureau, Green Budget Europe, and the European Federation for Transport and Environment issued proposals for the European Commission’s Country Specific Recommendations in support of the EU Semester process. For Hungary, there are proposals to take serious measures to reduce poverty, corruption and tax fraud, and to strengthen the institutions which serve public participation and democracy. See the proposals here:

A Mid-term Assessment of the Environmental Policy Performance of the Hungarian Government:

According to the assessment by 42 NGOs, the Hungarian institutions of environmental protection have drastically weakened in the recent years, including the legal and participative possibilities as well as the capacities of the authorities. Read the Mid-term Assessment of the Environmental Policy Performance of the Hungarian Government here: