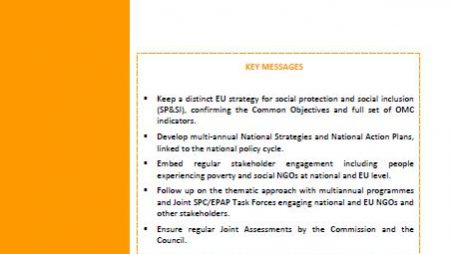 Last December, the European’s Commission proposals on the European Platform against Poverty recognized the key role of the EU Strategy for social protection and social inclusion and its coordination mechanisms (Social OMC) and the need to build on its many achievements. The Commission’s Communication promised a debate on the role of the Social OMC in the new Europe 2020 strategy, and to present a report by the end of the year.

In February, the Social Protection Committee (SPC – national government representatives for social policy) took the lead and set up an adhoc group to lead this debate and to produce a discussion paper, with the view of getting an SPC opinion adopted in the June Employment and Social Affairs Council (EPSCO).

EAPN has lobbied actively to defend and reinforce the Social OMC as an independent, integrated, rights-based strategy aiming to prevent as well as alleviate poverty and ensure access to pensions, health and long-term care. A key concern has been to back independent national strategies on social protection and social inclusion, as well as National Reform Programmes, developed together with stakeholders including people experiencing poverty, and more effective follow up of thematic priorities.

EAPN has been actively contributing to the process by developing its own input with its members, responding to the questionnaire devised by the SPC, and in participating in a stakeholder consultation meeting on the 12 April, as well as follow up with SPC representatives at national level.