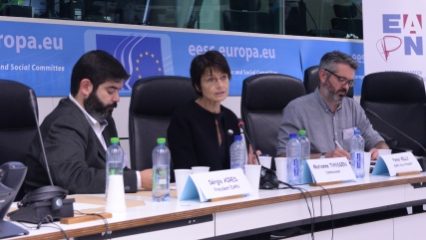 European Parliament President Martin Schulz declared that “Poverty and Social exclusion are becoming one of Europe’s most persistent problems. EU leaders maybe have provided some commitments to fight them through the Europe 2020 Strategy. However, due to (…) also a lack of determination to move from words to deeds, the track record is poor, to say the least (…). The European Semester continues to be a tool essentially devoted to budgetary discipline. A mindset change of what the EU Semester stands for is needed at both the EU and national levels“.

Commissioner for Social Affairs, Employment, Skills and Mobility Marianne Thyssen affirmed that “Participation of civil-society organizations and social partners is a foundation of democratic legitimacy. As President Juncker said, our focus will be to raise accountability and legitimacy of the European Semester involving the full participation of civil society”.

“We cannot lower our ambition when it comes to poverty. The current situation runs against values and principles the EU stands for, and undermines confidence of people in the EU project. We are determined not to allow such a situation to continue. Social considerations must be equally taken into account with economic ones. More fairness and progress are needed for a truly social Europe”, the Commissioner added.

88% of the National Reform Programmes in the EU do not have poverty as a main priority and only foster employment with increased conditionality as the main solution.

65% said the NRPs focused on macroeconomic and financial management not Europe 2020 goals and targets.

Although 47% of anti-poverty networks were consulted in some form, 76% said that their input was not taken seriously.

Following debate with the audience and speakers, strong support was given to the 3 main messages:

Pavel Trantina, President of SOC Section/EESC highlighted that “greater emphasis is needed in the European Semester on social objectives as economic objectives constantly prevail”. He also congratulated the “very useful work of NGOs and Trade Unions in the Semester Alliance for a more democratic, social and sustainable European Semester”.

Sérgio Aires, President of EAPN, “EU policies focus on Growth – but for whom and for what? As long as inequality, with a priority for the one caused by austerity policies are not tackled, poverty and exclusion will continue to grow and the future of the UE is at stake”.

Derek Holliday, board member of Poverty Alliance (EAPN Scotland) and Glasgow Homelessness Network activist gave a powerful assessment and testimony of what more than one in four people in Europe live daily. “I have spent more than half my life in poverty, but I’m still a person and can still contribute to society”, he notably declared.

The conference came at a timely moment when revisions to the European Semester are being considered, in the light of the 5 President’s report and worries about whether Europe 2020 will be side-lined, putting the poverty and social targets at risk, following the delays to the Mid-Term Review. The recent orientation debates held by the College of Commissioners led by Commissioner Thyssen and Vice- President Dombrovskis have also raised expectations of a new priority to put economic and social goals on a par, strengthening the social dimension and commitment to engage more effectively with civil society.

NOTES FOR THE EDITOR:

In 2010, the Europe 2020 Strategy for smart, sustainable and inclusive growth set a target to reduce poverty by at least 20 million by 2020, delivered through the coordination cycle of the European Semester. The strategy and process have strikingly failed to deliver so far, with 1 in 4 people now in poverty and social exclusion, an increase of 5 million since 2008. Although the European Semester was expected to engage stakeholders in the process at national and EU level, the experience of participation has been generally low quality, undermining support for the EU amongst civil society, as well as the development of sustainable solutions.

You can also view:

The European Anti-Poverty Network (EAPN) is the largest European network of national, regional and local networks, involving anti-poverty NGOs and grassroots groups as well as European Organisations, active in the fight against poverty and social exclusion. It was establishedin 1990.