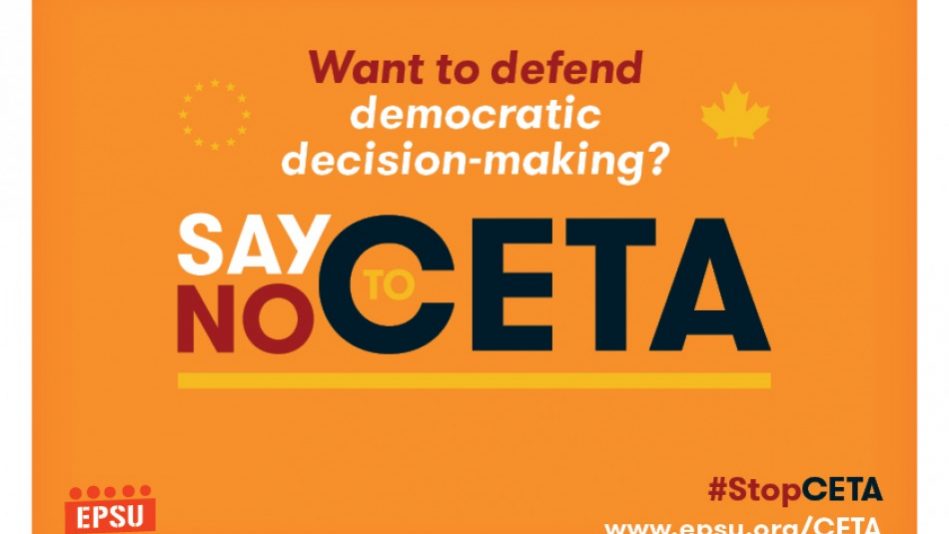 Friends of the Earth Europe, European Public Services Union, European Anti-Poverty Network – Press release,Brussels, July 5th – the European Commission today proposed the provisional application of the free trade deal between the EU and Canada (the Comprehensive Economic and Trade Agreement – CETA). That means the agreement would be applied before national parliaments have a chance to vote on it. [1]

Friends of the Earth Europe, the European Public Services Union and the European Anti-Poverty Network criticise that applying the agreement before national parliamentarians had their say is undemocratic and needs to be reversed by the European Council. It would also set a dangerous precedent for the EU-US TTIP agreement.

The three groups express their worries about the negative effects the agreement would have on workers, low income households, social rights and the environment. Of particular concern is the inclusion of the Investment Court System (ICS) in the agreement. ICS is a rebranded version of the controversial Investor-State Dispute Settlement mechanism (ISDS) which maintains its core flaws and would allow regulation in the public interest to be challenged by corporations in business-friendly tribunals. [2]

Commenting on the dangers of the ICS, Fabian Flues, trade campaigner at Friends of the Earth Europe said: “CETA contains dangerous provisions on investment that threaten our environmental and health protections. The proposed ‘Investment Court System’ is simply a re-branded version of the toxic ISDS corporate courts that were thrown out of major trade deals last year after public outcry, and should under no circumstances be provisionally applied before national parliaments can have their say. Governments and parliamentarians must reject the agreement to safeguard our democratic decision making processes.“

“Public services are not excluded from CETA.” said Jan Willem Goudriaan from the European Public Services Union, which backs the StopCETA campaign. “Negative listing means that everything is included unless explicitly excluded. This ’list it or lose it’ approach threatens democracy and the ability of towns and cities in particular to shape public services now and in the future.”

Sergio Aires, President of the European Anti-Poverty Network, said “We are concerned about the negative impact on public services and social rights, and the impact on growing poverty and inequality. National parliaments must protect the interests of the most vulnerable, including people experiencing poverty and social exclusion. Passing CETA would be a very dangerous precedent for TTIP.”

The three groups call on decision makers to reject CETA outright, because it contains provisions that would threaten public services, environmental regulations and democratic decision-making.

The college of commissioners decided today on the mixity of the agreement, i.e. if the approval of national parliaments is needed for CETA to enter into force, and on the provisional application, i.e. if (parts of) the agreement are being applied before national parliaments have ratified the agreement. The Commission decided on a mixed agreement with provisional application. The Council can change the Commission decision with a unanimous vote. The agreement still needs the signature of the Council, consent of the European Parliament and the approval of all national parliaments. A full overview of the procedure can be found here:http://www.transportenvironment.org/sites/te/files/publications/CE%20and%20T%26E%20Memo%20on%20the%20life%20cycle%20of%20EU%20international%20agreements%20FINAL.pdf

[2] The ISDS system allows companies to sue governments in business-friendly tribunals if new laws and regulations could affect their profits. Careful analysis has shown the dangerous overlap between ISDS AND ICS, which would still allow vital public policies to be challenged. http://foeeurope.org/investment-court-system-put-to-test