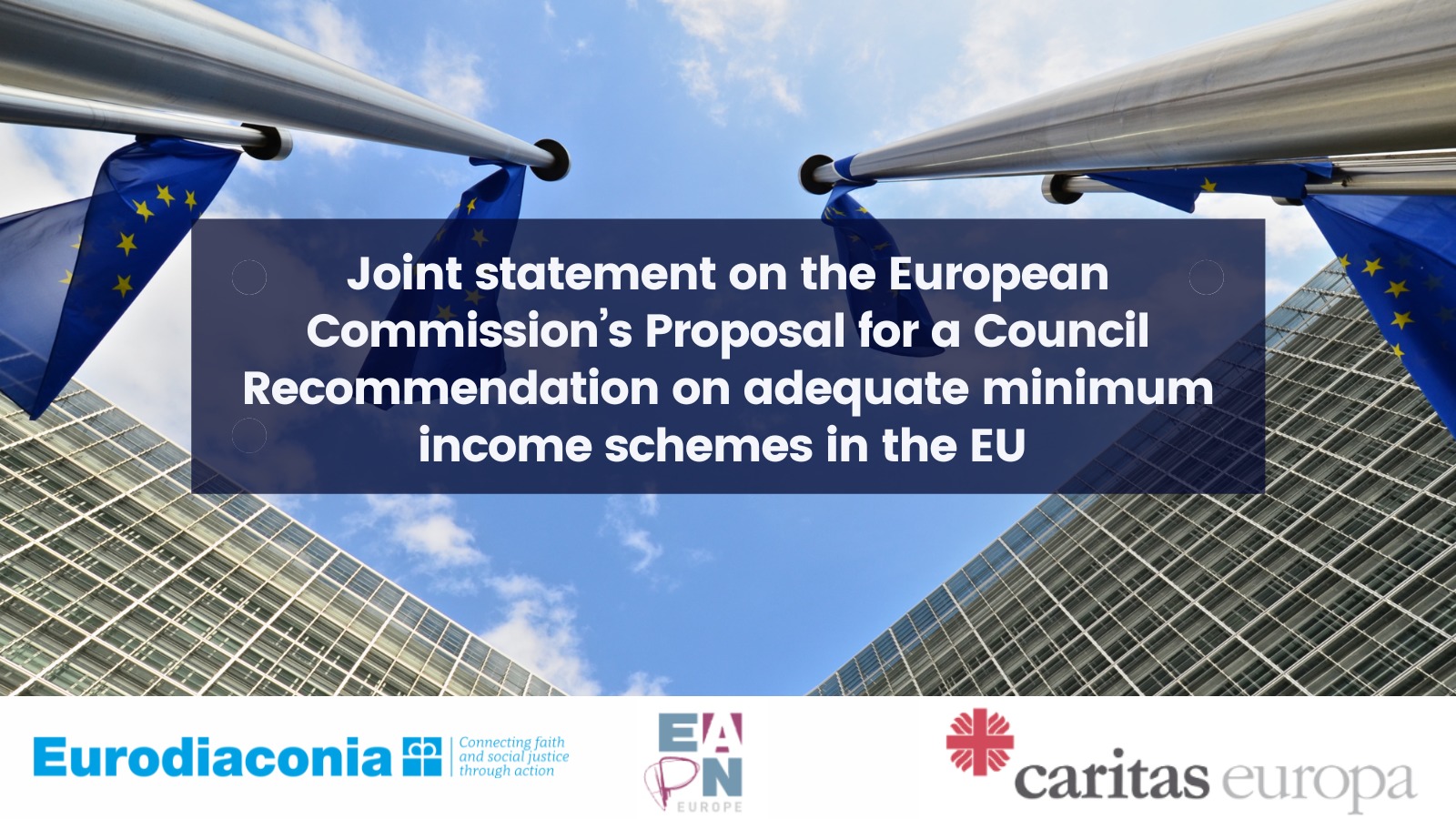 On September 28th, the European Commission released its long-awaited proposal for a Council Recommendation on adequate minimum income ensuring active inclusion (the Proposal). The Proposal is part of the initiatives announced in the European Pillar of Social Rights Action Plan and seeks to contribute to the EU-level headline target to reduce the number of people at risk of poverty or social exclusion by at least 15 million people by 2030.

Concretely, the Proposal provides recommendations to Member States to modernise their minimum income schemes by asking them to improve the adequacy of their income support, tackle lack of coverage and non-take-up, improve access to inclusive labour markets, ensure access to enabling and essential services, promote individualised support, and increase the effectiveness of governance of social safety nets, as well as monitoring and reporting mechanisms.

The European Anti-Poverty Network, Caritas Europa and Eurodiaconia (the signing organisations), are leading networks in the fight against poverty and social inclusion across Europe, and have been jointly advocating for adequate minimum income schemes for many years. As signing organisations, we welcome the Proposal, for it includes positive aspects and advancements. However, we also notice some major missing points and shortcomings that should be urgently addressed by Member States before the approval of the Proposal by the Council:

The signing organisations observe with preoccupation the current economic and social situation in Europe. With inflation at a record high of 9.1% in August 2022, mainly due to high energy and food prices, we observe that rising poverty is the most pressing social issue in Europe at the moment. Those rising living costs impact lower-income households most, as basic goods such as food and energy are particularly affected by price increases and also represent a larger proportion of total spending for those households. The multiple crises have exacerbated structural and systemic inequalities, social exclusion and poverty. Already before the coronavirus crisis, one in five people in the EU were at risk of poverty and social exclusion, with millions more expected to be dragged into poverty as a result of the successive crises.

Therefore, together, the signing organisations urge the Council of the EU and its Member States to be ambitious and act swiftly to prevent more people being dragged into poverty. We call on them to address the Proposal’s shortcomings above-mentioned and approve a robust Council Recommendation.

However, we believe that while useful, simple soft-law and policy guidance mechanisms are not enough to guarantee adequate, accessible and enabling minimum income schemes that ensure a life of dignity for all. As we have been stating for years, we reiterate our urgent call for a binding EU Framework Directive on Adequate Minimum Income to assure effective contribution towards the implementation of Principle 14 of the European Pillar of Social Rights. Thus, we hope this council recommendation to become a step toward this direction.