Fighting poverty is not only about unemployment rates! 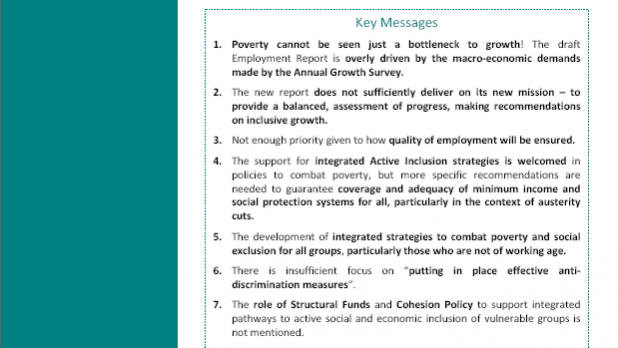 The publishing of the Annual Growth Survey marked the start of the first European Semester, as part of the new Europe 2020 implementation schedule. In the new architecture, the fight against poverty and social exclusion is to be governed by Guidelines 10, which is an Employment Guideline. This means that, for the first time, the Joint Employment Report does not deal exclusively with proposed employment policies, but also assesses to what extent are Member States proposing to implement the whole spectrum of social policy issues comprised under Guideline 10, aimed at delivering on the poverty-reduction target.

While EAPN welcomes a number of positive points, relating to active inclusion, child poverty, vulnerable groups, wages and security, as well as education and training, we regret to see that the focus remains on achieving high employment rates, through active labour-market policies and up-skilling the workforce. There is no evidence of a comprehensive strategy to address growing inequalities and to build better, more socially cohesive societies for all. EAPN’s response puts forward key messages, emphasising the need to mainstream the social dimension throughout the strategy, to support the fully integrated implementation of the Active Inclusion, to tackle in-work poverty and precariousness, to combat discrimination and to promote a targeted use of Structural Funds to deliver on inclusion.

Finally, EAPN regrets that, once more, stakeholder involvement in the process is not strengthened, despite Recital 16 of the Employment Guidelines, thus missing a valuable opportunity to ensure national ownership.