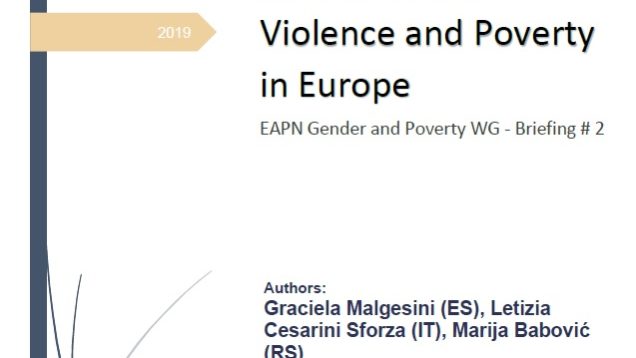 Gender-based violence is a silent disease. It affects women and girls of all ages but is particularly hard with those who live in poverty and face social vulnerability.
In this report, we analyse the context, the typology and the features of this grave human rights violation, which has a big social and economic impact in Europe.
We present the situation of the EU28, the European Free Trade Association (EFTA) and the candidate countries, including some good practices.
Finally, we analyse the EU role and the Istanbul Convention, recommending 15 measures that governments should implement in order to eradicate gender-based violence and promote the victims’ human rights in Europe.

What are the purposes and scope of this paper?

Violence against women and girls is a global pandemic that has or will affect 1 in 3 women in their lifetime. Violence is not only a personal struggle for the victims, but also has severe consequences on social and economic outcomes.

As a leading European network on advocacy against poverty, EAPN is well positioned to reflect on and denounce violence against women and girls, as well as the inter-sectoral relation it has to poverty, around the EU.

This paper is drafted by the Gender and Poverty Group of EAPN in order to increase the awareness on gender-based violence and its effects on women’s risk of poverty across Europe, among EAPN members, but also among key stakeholders at EU and national levels and broader public. With clearer insights into the importance, scope and impacts of gender-based violence on the economic situation and wellbeing of women and their children, the advocacy and lobbying activities of EAPN related to poverty reduction and improved social inclusion, as well as policy making at EU and national levels, will be able to more precisely focus on effective policies and programs.

Poverty is by itself a form of structural violence, the one that is embedded in the social structures marked by inequalities. As J. Galtung stressed, resources are unequally distributed in the society and, moreover, the power to decide over the distribution of resources is unequally distributed. Therefore, structural violence which is grounded in gender inequalities, in discrimination and unequal chances to access resources is also a form of social injustice[3].  Structural violence that appears in the form of gender discrimination, exclusion of women from developmental processes, sectors and activities generating high economic values, with high rewards, or from social services crucial for achieving decent lives is considered as a very important form of violence.