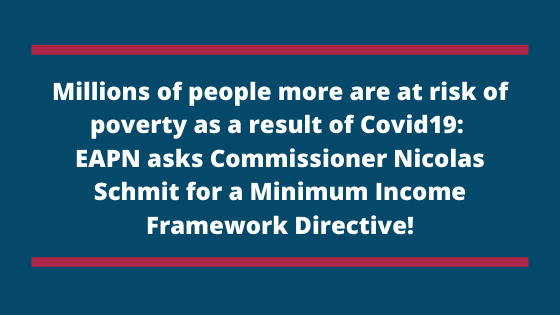 Europe is going through extraordinarily difficult times. The short term impacts of Covid19 on people’s lives as well as the economy are catastrophic, and the medium – long term impacts likely to be equally, if not more so. Millions of people’s jobs, income and living standards are at risk, as they fall back on inadequate unemployment benefits or income support, whilst faced with rising costs, rents and bills. The progress we have seen in recent years on poverty reduction in Europe is under threat. Without strong and decisive action, millions more people throughout Europe risk being pulled into poverty.

A key way for Member States to protect people at risk of poverty is to ensure an adequate, accessible and enabling income support for all – acknowledging the financial challenges that people are going through, and the need to guarantee their right to adequate income.  The European Pillar of Social Rights recognises that “everyone lacking sufficient resources has the right to adequate minimum income benefits ensuring a life in dignity at all stages of life”.  If ever there was a time for Member States to put this  principle into practise, it is now, when millions of citizens are lacking sufficient resources because of Covid19. EAPN wrote a letter to Commissioner Schmit, asking him to provide leadership and to propose a Framework Directive on Minimum Income, as soon as possible, and to ensure that Minimum Income is in the European Commissions work programme.

The letter has been supported by more than 20 MEPs (including Mairead McGuiness, First Vice President of the European Parliament, Dimitrios Papadimoulis, Vice President of European Parliament, Pierfrancesco Majorino and Cindy Franssen, Co-Chairs of the Intergroup on the Fight Against Poverty, Ska Keller & Philippe Lamberts, Co-Presidents of Green / EFA, & Marisa Matias, Vice-Chair of Intergroup on the Fight Against Poverty), as well as many other groups and academics (including the UN Special Rapporteur on Extreme Poverty and Human Rights, the European Trade Union Confederation, the European Economic and Social Committee’s Worker Group and the Social Platform).

The Parliament Magazine covered our letter in a recent article underlining that a total of 23 deputies from four different mainstream political groups co-signed a letter demanding minimum income to help Europe’s poorest survive Coronavirus. The letter was also featured in the Irish Times.

Members of the European Parliament: