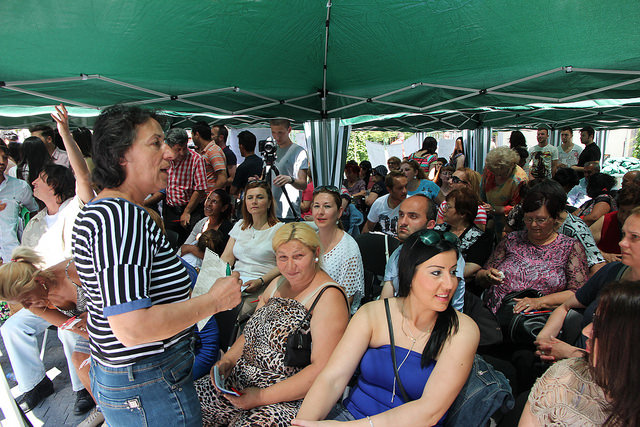 The 4th Meeting of Meeting of People experiencing Poverty was held on 03.06.2015 in Skopje on the topic “We are all equally important”. Organised outdoors, like the EAPN Pep Conference in 2013, 300 people experiencing poverty took active participation in the event and presented their experience of poverty themselves. Governmental and non-governmental representatives took part in a democratic debate on solutions for better quality of life for all citizens.

The conference was held in three parts

1. Opening of the conference and revision of the Declaration of poor and socially excluded people adopted in 2013, which was sent to the Government of Macedonia.

Participants were divided into four workshops, to identify the problems they face daily, the causes of poverty and solutions to overcome them:

3. Developing democratic debate amongststakeholders and between people experiencing poverty and social exclusion and representatives of legislative and executive power.

While representatives from the whole political spectrum were invited, only one Member of Parliament from the opposition party participated.

The conferencewas well covered by the media and people passing by showed great interest as well, asking to receive information about the event and about the work of MAPP.

The Declaration of People experiencing poverty and exclusion from the Meeting will be sent to members of the Parliament of Macedonia.

The Meetingreceived the technical and financial support from the Foundation Friedrich Ebert Stiftung.