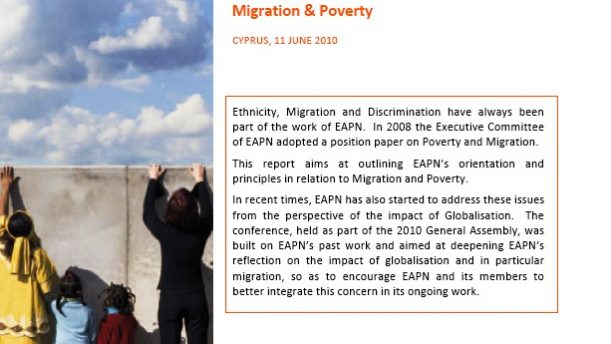 EAPN held its 2010 General Assembly in Cyprus, in June 2010, with its main conference on Migration and Poverty.

Ethnicity, Migration and Discrimination have always been part of the work of EAPN.  In 2008, the Executive Committee of EAPN adopted a position paper on Poverty and Migration. In recent times, EAPN has also started to address these issues from the perspective of the impact of globalisation.

The conference, held as part of the 2010 General Assembly, was built on EAPN’s past work and aimed at deepening EAPN’s reflection on the impact of globalisation and in particular migration, so as to encourage EAPN and its members to better integrate this concern in its ongoing work.

The report of this conference aims at outlining EAPN’s orientation and principles in relation to Migration and Poverty.