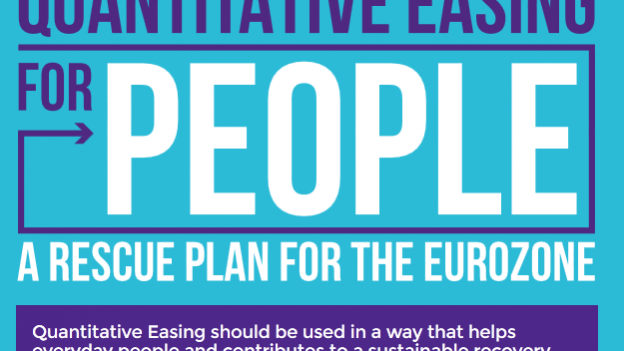 What is quantitative easing?

Quantitative Easing is when the European Central Bank creates new electronic money and puts it into the economy.

Where does the money go?

At the moment the money created through QE goes to financial institutions like banks.

Where could it go instead?

Instead of going to the financial sector which caused the crisis, we propose to use it in a way that helps everyday people and contributes to a sustainable recovery.

QE began in the eurozone earlier this year, the ECB is currently creating 60 billion Euros each month. The ECB is set to decide next week if it wants to increase QE even further.

Eric Lonergan, macro fund manager who has written extensively on the topic said:

‘This campaign reflects the growing consensus that monetary policy isn’t working. The ECB needs new tools to combat deflation and achieve its mandate. Countries in the eurozone need to stimulate their economies without increasing public and private debt, without increasing inequality, and without creating bubbles. Cash transfers to households, or QE for People would do just that.’

‘In fact, QE for People is likely to be so effective that only a fraction of the €60 billion currently being created through QE each month would be necessary under a QE for People program.’ said Bruno Lamour, President of Collectif Roosevelt.

The campaign will focus on raising awareness of the failures of the current QE programme, building political momentum around alternative monetary policies and fostering further research.

People can signup to the campaign by visiting www.qe4people.eu

Right to Energy Coalition Report shows that the majority of EU countries are unable to keep citizens warm this winter
February 25, 2019
Upcoming Events