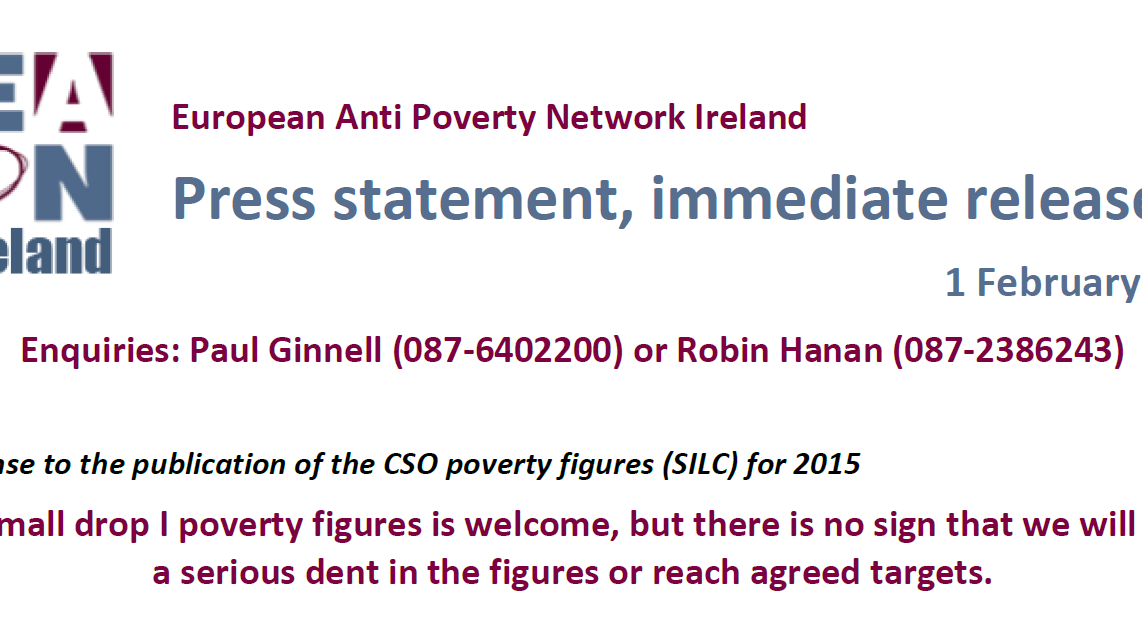 The small drop in poverty figures is welcome, but there is no sign that we will make a serious dent in the numbers or reach agreed targets.

The European Anti-Poverty Network (EAPN) Ireland, a network of over two hundred national and local organisations working against poverty, reacted to the latest poverty statistics (for 2015) from the CSO and called for a serious commitment by the Government to fighting poverty.

While the figures are a small improvement on those for 2014, particularly in those experiencing enforced deprivation, they show that economic recovery has not made a serious dent in the numbers whose lives are blighted by poverty. The numbers in deprivation are still twice those in 2008.

‘Twenty years ago, Taoiseach John Bruton, along with the Tánaiste and the Minister for Social Welfare, committed the Government to a strategy to focus all areas of Government policy on the urgent task of reducing or eliminating poverty. This commitment was repeated and strengthened by subsequent Governments.

““The Government has committed itself to reducing the levels of those people living in consistent poverty to 2% or less by 2020 but there are now 8.7% of the population in consistent poverty, double the numbers in 2008, and there is little sign of the serious all-Government commitment needed to eliminate this disgrace to our society

“The figures for ‘enforced deprivation’ – i.e. being unable to afford basics like a warm coat, a substantial meal every second day or heating your home – are even worse, at (a quarter of the population, more than one third of children and even 16%of those at work. These figures still almost double those at the start of the recession in 2008, although down from the height of over 30% in 2013.

“We need to ask ourselves seriously what type of society says that this is OK.

“We repeat our call for the Government to implement its commitment to develop an integrated framework for social Inclusion, to tackle inequality and poverty, starting with an all-Government five year plan with effective policies and budgets.

“We are particularly worried by suggestions by the Minister for Social Protection in November last year that poverty targets be revised yet again.  We need a serious effort to achieve the existing targets, not more time wasted on revising targets. The last social inclusion plan failed so this time we need to ensure we have an effective one which tackles issues of adequate income and quality services for everyone and decent jobs for those who can work ”.

Experts by Experience Talk to Ministry of Social Affairs and Employment about Changes to the Participation Act | EAPN Netherlands
October 12, 2021