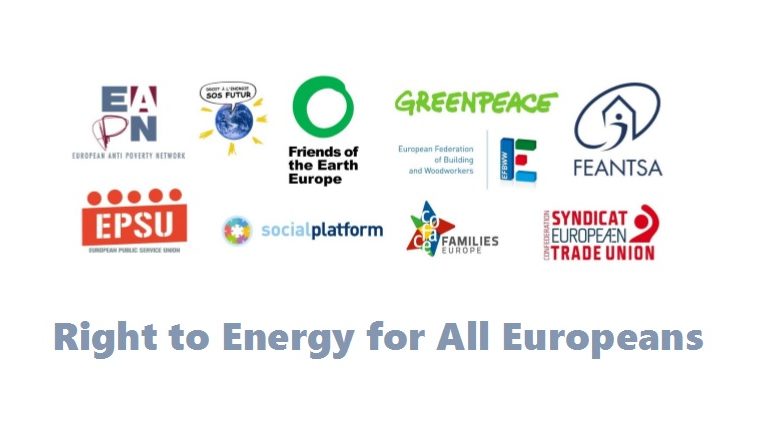 EAPN is co-founder of a coalition of unions, anti-poverty organisations and environmental NGOs committed to join efforts to fight energy poverty and defend the right to renewable energy for all.

Brussels, 21 June 2017 – The civil society coalition against energy poverty writes to MEPs in advance of amendments around the “Clean energy for all Europeans” Package when key legislation on energy efficiency and the internal electricity market will be debated.

The figures on energy poverty in Europe are sobering. Up to 125 million Europeans cannot adequately heat their homes. 80 million Europeans live in damp homes. Excess winter deaths represent 200.000 deaths every year, half of them directly linked to cold homes.

Energy poverty can be explained by three interconnected causes: high energy prices, low incomes, and energy inefficient housing (representing a staggering 75% of the building stock in the EU). Energy poverty impacts the most vulnerable populations first: the elderly, children, and single-parent households (women representing 80% of them). Overcoming this pressing social issue will require a holistic political approach, linking social and environmental policy. The economic crisis, ensuing austerity policies and the growing precariousness of the labour market remain the main drivers of the rise of poverty in Europe, however, it is crucial to recognize the role of energy policies in the rise of this issue.

Access to affordable, reliable, sustainable and modern energy has been identified as one of the UN Sustainable Development Goals. Energy poverty is also increasingly recognised by European institutions. In 2009, it was included in European legislation, and in the Commission’s 2030 Clean Energy for All Europeans package. Awareness is also increasing at national levels, as more and more public bodies, organisations and social movements deepen their understanding of the specificity of energy poverty. But awareness alone will not deliver: it is time for political action to fight energy poverty at the European level.

Tackling energy poverty requires transforming our energy systems. Increased energy efficiency, through massive renovation efforts across Europe, and switching to citizen and community-owned renewable energy production have a key part to play to reduce energy poverty. EU policies must ensure people, in particular low-income households, can be part of and benefit from the transition and are not left to foot the bill. All citizens should have access to affordable and renewable energy and energy efficient housing.