Signs of change towards a Social Europe? | Annual Growth Survey 2017 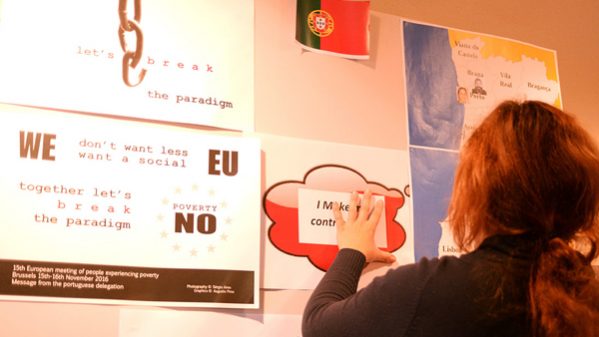 On 16 November, the European Commission adopted the Autumn Package presenting the Annual Growth Survey (AGS) 2017, with the Press Release title: ‘Working on a stronger and more inclusive economic recovery’.

EAPN cautiously welcomes some messages and actions highlighted in the AGS 2017 and Autumn Package which highlight the intention to promote ‘social fairness’ and deliver more “inclusive growth” “to achieve an economic recovery that benefits all, notably the weaker parts of our societies and strengthens fairness and social dimension”. However, the repetition of the same three priorities as 2014 and 2015 –  1) boosting investment 2) pursuing structural reforms and 3) ensuring responsible fiscal policies, and failure to explicitly give priority to the European Pillar of Social Rights, raises concerns that the overarching approach will not result in concrete gains for people experiencing poverty and social exclusion, nor take us further on the road to Social Europe.  EAPN will be looking for concrete signs that the new ‘social rights and standards approach’ will be given equal weight to economic concerns in the EU policies, and particularly in the European Semester this year.

As positive elements we underline the decision by the Commission to not pursue a suspension of EU funding against Spain and Portugal, and a softening of the approach on austerity – putting more emphasis on flexibility and room for more expansionist polices, as positive signs of a change of a direction. Potentially positive elements also include the need to tackle the high poverty rate (1 in 4 of the population) and high inequality rate. The focus on social policy as a productive factor can be welcomed but social policy must first be about achieving social goals. The AGS also calls for progress on social standards –  adequate minimum income systems and pensions, quality work, as well as support to universal access to health, rather than just a focus on cost efficiencies. Tax systems are also expected to play a role in combating inequality. Although social investment isn’t specifically mentioned, the AGS calls to double the European Fund for Strategic Investment (ESIF) and has a new proposal on investing in human capital and social infrastructure – particularly long-term care services, and affordable and flexible childcare. The reference to achieving a smooth welcome for migrants including refugees needs a big shift in practice to be credible.

However, with Stability and Growth remaining the overarching economic framework, the same 3 priorities, and a major focus on “modernising social protection, flexibilizing labour markets, expanding privatisation and liberalisation of services to promote the internal market”, as well as financial sustainability of budgets – It is not clear what the overall impact on poverty and social rights is likely to be.

EAPN has been pressing for a change of direction to a more Social Europe, including in our last letter to President Juncker. We called for a transformative social and economic agenda, a clear social dimension with social rights, social investment, an integrated poverty strategy and more democracy and effective participation of civil society organisations.  “We are pleased to see some shift towards a Social Europe and response to the first 2 areas we proposed.  We are worried that the social elements could be ‘window-dressing’ with the reality being ‘business as usual’. We’re concerned at the lack of prominence for the Europe 2020 and the poverty target and the absence of the need for an EU anti-poverty strategy to deliver on it. It’s not good enough to say the same 3 priorities will result in reduction in poverty and inequality. We will be watching closely to see whether the promises convert into real positive social impact”, said Sérgio Aires, EAPN President.

“We also urge the Commission to give priority to civil society engagement, as well as social partners, to generate ideas, knowledge and support for the building of a more Social Europe. The message of the Commission to the recent European Meeting of People Experiencing Poverty that ‘their voice needs to be heard’ must be reflected in the way civil society is facilitated and supported to engage in this process at all levels”, said Fintan Farrell, Acting EAPN Director.