Structural Funds 2014-2020: What room for social inclusion and the involvement of NGOs? 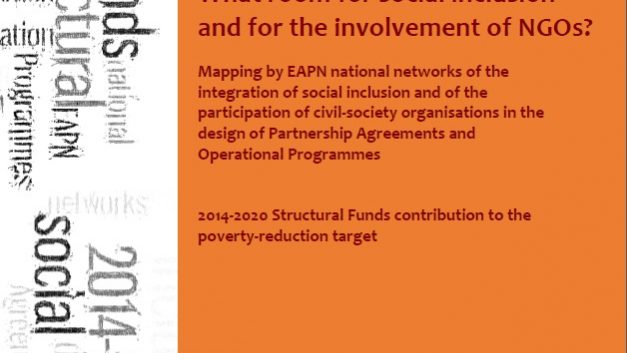 Although a step forward is to be noted with regard to the implementation of the partnership principle for NGOs and to the profile given to social inclusion/ poverty reduction, there is still clearly a big room for improvement. EAPN Members reported that consultation processes at national level were not properly organized to ensure a meaningful participation of NGOs and that the delivery on the poverty reduction target will be problematic given the insufficient prioritization given in the programming documents (Partnership Agreements and Operational Programmes).

This publication started by a consultation launched in February 2013 by EAPN among its 25 EU national networks. 10 EAPN national networks were able to send detailed contributions, namely EAPN Austria, Czech Republic, Denmark, France, Germany, Ireland, Italy, Poland, Portugal and Spain (see summary table below). Most other networks could not take part, as they could not get actively involved in the drafting of the Partnership Agreements.

Do you know about EAPN’s Toolkit on Structural Funds for Social NGOs?

In October 2012, EAPN published its Toolkit on Structural Funds for Social NGOs aiming at helping its national networks to get involved in the design of the Partnership Agreements and Operational Programmes.