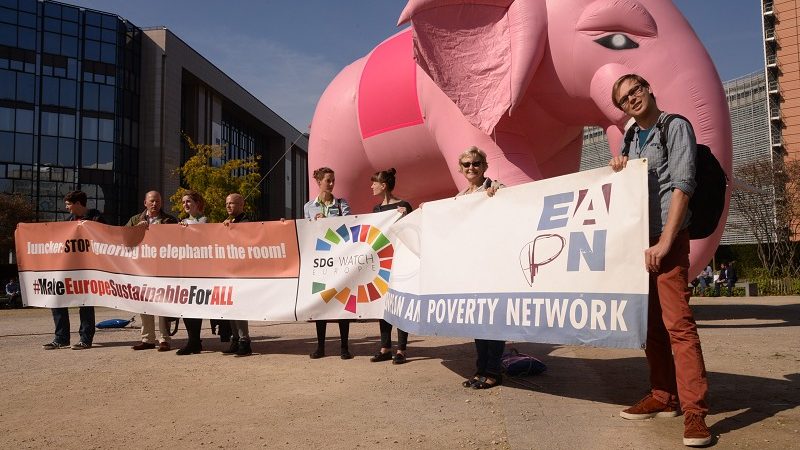 25 September 2017 marks the two-year anniversary of the adoption of the Sustainable Development Goals (SDGs). Two years after signing up to the SDGs, the EU still has no clear plan on how to achieve them and the clock is ticking.

Through the We the People #ACT4SDGS campaign, the SDG Watch Europe alliance in which we are partner, came together to raise awareness – one of hundreds of events globally following an online European campaign #MakeEuropeSustainableForAll. EAPN stood as SDG Watch partner, outside the European Commission with a massive elephant to remind President Jean-Claude Juncker that he cannot continue to ignore sustainability!

In a press release issues today by SDG Watch Europe, Leo Williams, EAPN Director, said:“President Juncker’s complete lack of focus on the SDGs or sustainable development in his State of the Union address only serves to reconfirm the Commission’s unfortunate lack of political prioritisation of the SDGs, despite all European Member States signing up to this global agreement in 2015 at the highest political level, and millions of European citizens having been involved in their elaboration.  People experiencing poverty and social exclusion, and the organisations that work with and for them, expect the Commission to take the most ambitious agenda to tackle poverty we have seen for quite some time, much more seriously.”

Read more about the #ACT4SDGS campaign here, and on social media.