Press release | The sooner we start, the easier we will find solutions 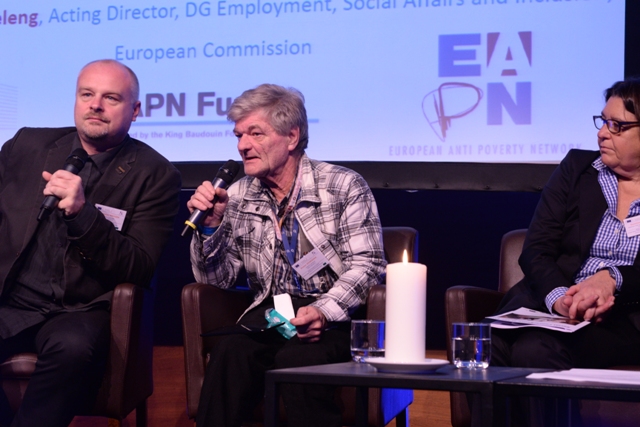 Brussels, 19-20 November 2015 – Delegations of people experiencing poverty from 30 European countries have come to exchange for two days (19-20 November) with EU officials and other policy makers with the aim to input on policies that affect them with the hope of building greater social convergence in the European Union.

In his acceptance speech in the European Parliament in October 2014, President Juncker presented the new team as the “last chance Commission” and urged EU lawmakers “to support him in bringing Europe closer to its citizens”. He also spoke of the need to build a social triple A Europe. The 122 million people living in Europe and experiencing poverty must wonder if they are part of the citizens of the European Union to which President Juncker refers. Years of disproportionally suffering from ‘austerity policies’ which has asked those, with the weakest shoulders to carry the heaviest loads, has left the confidence of people experiencing poverty in the European Union badly shaken and a real sense that Europe can’t miss what could be its last chance to re connect to the great majority of its citizens.

“There are 122 million Europeans at risk of poverty today. This Commission is committed to fostering upward social convergence. To this end I am working on the development of a social pillar to ensure that our legislation and policy framework keeps pace with developments in the fast-changing labour market, and invests in people through a modernised social framework for those in and out of work. For these efforts to be successful, the input and involvement of people experiencing poverty and social exclusion is crucial. EU funds are also available to help combat poverty and social exclusion. Over 21 billion euros from the European Social Fund as well as 3.8 billion more from the Fund for European Aid to the Most Deprived are available until 2020” said Commissioner for Employment, Social Affairs, Skills and Labour Mobility, Marianne Thyssen speaking on the eve of the Meeting.

Despite this reality people experiencing poverty once again gathered in Brussels, to stand with those within the Institutions and other policy makers and policy shapers who also struggle to give Europe a social face.

Issues such as access to health and other essential services, access to decent work, adequate and accessible social protection and social assistance, affordable and accessible housing, and the right to be part of a meaningful context and being part of a communitywere issues highlighted by the Swedish delegation. But these issues were echoed in the inputs from many of the delegations despite the different country contexts.

Saviour Grima, Vice-President of EAPN stressed that “The EU leaders face a key challenge to unite a divided Europe, dived between countries and within countries, a Europe hit by growing inequalities and increased poverty, a Europe which risks to turn its back on the most excluded.”

“We need a Europe conscious of its heritage and proudly defending and building together a United Europe of Social Security and functioning Welfare States fit for the times we live in. A European Directive on Adequate Minimum Schemes would be a needed confidence boosting measure to show that European leaders are serious about what they call a social triple A Europe”, he concluded.

Evzen Vojkuvka, a member of the Czech delegation declared: “I have lived in the street for 7 years, during which I appreciated getting help from people. They helped me find a new sense of life and I decide to take action and get involved in helping people.”

“I really appreciate being here at this Meeting and listen to so many experiences form so many countries. I ask all of you to sit down at one table all together, because that is how we will fight together poverty. The sooner we start, the easier we will find solutions”, Evzen added.

Dominique Fabre, representative of the Luxembourg Presidency, “My country’s aim is to deepen social Europe and common social values for Europe. Social inclusion and social protection should be there for all people. We must fight poverty, social exclusion, homelessness and housing exclusion. We are here to enable people to work for decent pay, in secure jobs, focus on minimum schemes and set reference budgets in all EU countries for a decent life, access all services in society, including access for all to sports and culture”.

“Homelessness and child poverty have risen to unacceptable levels. Being evicted from one’s flat means not only losing one’s roof, but also entails a long road leading to total exclusion. In 2015, this is not what a modern Europe should be. We must work for a common goal, which is social Europe”, Dominique Fabre added.

The 2015 European Meeting of People Experiencing Poverty is organized at the Halles des Tanneurs in Brussels by the European Anti-Poverty Network (EAPN) with the support of the European Commission, the Luxembourg Presidency of the Council of the European Union and the EAPN Fund.

Notes for the editor:

All figures mentioned here below are taken from 2013 Eurostat and EU SiLC (Community Statistics on Income and Living Conditions http://ec.europa.eu/eurostat/statistics-explained/index.php/People_at_risk_of_poverty_or_social_exclusion

In 2010, the EU adopted the Europe 2020 Strategy, aimed at guiding the EU towards a smart sustainable and inclusive economy. Among the five headline targets of this strategy, a poverty target was adopted for the first time, to reduce by at least 20 million the number of people ‘At Risk of Poverty or Social Exclusion’ (AROPE).

The AROPE indicator is defined as the share of population in at least one of the following three conditions:

The most recent data available (2013) show that 24,5% of the EU population, that is 122,6 million people, are at risk of poverty or social exclusion. 16,7% of the population in the EU is at risk of relative income poverty, 9,6% is severely materially deprived, and 10,7% is living in households with very low work intensity.

In 2013, 46,6 %of people who were unemployed were at risk of poverty. 8,9% of the people in employment were living under the poverty threshold.