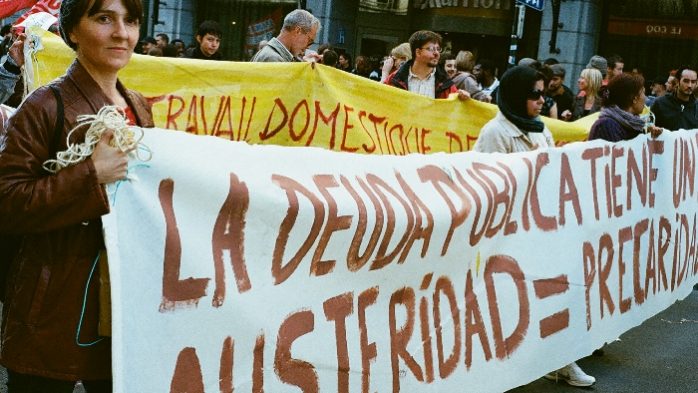 While the EU formally ratified the Europe 2020 Strategy with concrete targets in terms of poverty reduction and the Annual Growth Survey acknowledges austerity measures have had a negative impact on growth, jobs and poverty rates, action is still focused on austerity.

Cutting public expenditure at a time of recession is squeezing growth and increasing unemployment. The price that is being paid by workers and low-income households, particularly in bail-out countries is unacceptable. Not only are minimum wages cut with 20% inGreecebut also unemployment benefits are lowered throwing many into poverty. Our members report that economic and social cohesion is structurally undermined in their countries with nationalism gaining more supporters and racism being openly expressed. Meanwhile, corporate profits have reached pre-crisis records and are funneled into dividends rather than productive investment.

EAPN and EPSU demand a new, open and transparent, European project, involving social partners and civil-society organisations in National Reform Plans and Social Reports at both national and European levels. This European project should include:

Fintan Farrell, Director of EAPN, said “I don’t know what it will take to make Member States realise that the austerity approach, while putting social concerns in the background, has not worked and will not work and will not restore trust in the EU. It is time to direct the money to meet the needs of people, and not of markets”.

EPSU’s Deputy General Secretary Jan Willem Goudriaan comments:  “We reject the misguided Austerity Treaty. It is vast becoming a symbol of misery for millions rather than a sign of hope. What the EU needs is a social project promoting decent jobs and addressing rising inequality through investment in public infrastructure, public services and social security”.

EPSU is the European Federation for Public Service Unions representing 8 million workers in their 275 trade unions and are active in health care, social services, utilities, local and regional government and national and European administrations in all European countries. www.epsu.org.

The European Anti-Poverty Network (EAPN) is an independent network of non-governmental organisations (NGOs) and groups involved in the fight against poverty and social exclusion in the Member States of the European Union, established in 1990. www.eapn.eu.