Will MEPs give the ESF its full potential to reduce poverty? 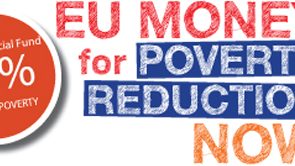 “This 25% share of ESF is essential if we are to make a real impact on poverty and social exclusion. It is also a minimum considering the devastating impact of the market-driven austerity measures. The damage needs to stop!” he added.

In their letter to the President of the European Parliament Martin Schulz and to the President of the European political groups, the Coalition for EU Money for Poverty Reduction NOW! Campaign recalls how crucial this vote is. In the context of a very disappointing shortfall in the national poverty-reduction targets, the rising number of people experiencing/ or at risk of poverty and social exclusion (i.e. 120 million people, 1 in 4 adults and over 1 in 4 children in the EU), the European Social Fund is more than ever needed to invest in people particularly those who are furthest from the labour market and face challenges in participating fully in society.

Earmarking 20% of the ESF for social inclusion/ poverty reduction will not be ambitious enough nor sufficiently people-focused if it is not accompanied with a strong ESF budget, of at least 25% of the total Cohesion Policy’s budget, supported both by the European Commission and the Employment Committee of the European Parliament. This would allow the 20% ESF earmarked combined with the ex-ante conditionality on poverty and social inclusion (i.e. the draft General regulation of Structural Funds requires Member States to set up “national anti-poverty strategic policy frameworks”) to provide a powerful leverage effect to set up ambitious and integrated national anti-poverty strategies, particularly if backed by a common EU antipoverty strategy.

Note to the editor:

Read the joint letter to President of the European Parliament and Presidents of the political groups.

The EU Campaign ‘EU Money for Poverty Reduction, NOW!’ has aimed to defend the proposed regulation made by the European Commission back in 2011 to allocate at least 25% of the Cohesion Policy’s budget to the European Social Fund (ESF) and at least 20% of the ESF earmarked for social inclusion and poverty reduction. This campaign ends with the long-awaited vote in plenary session of the European Parliament tomorrow on the EU Budget and the ESF Regulation 2014-2020.

For more information on this press release and on the campaign, see EAPN’s website:https://www.eapn.eu/eu-money-for-poverty-reduction-now and contact: Nellie Epinat, communications officer Nellie.epinat@eapn.eu (+32 (0) 498 44 13 66).