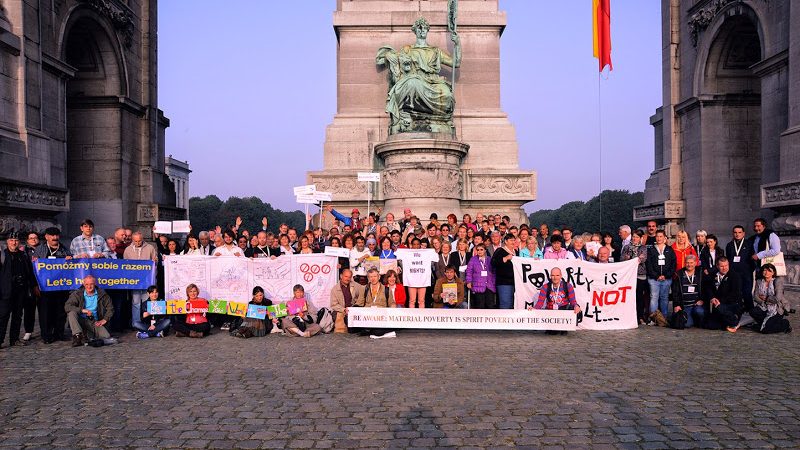 The European Commission and the European Parliament must act to ensure that Member States deliver their commitments with an increase in the quantity and quality of projects that tackle poverty and foster inclusion” said Sérgio Aires. “We expect vigorous monitoring and reporting on how the 20% earmarked for social inclusion is used with real participation of people experiencing poverty in the overall process”, he concluded.

The delegates to the 13th Meeting of PeP – people experiencing poverty and anti-poverty activists-, stressed their hope on a deep change but that unless part of the Funds are made available for projects run by local and national NGOs, many of those who need support and opportunities the most will not be reached. They underlined that rules and procedures for receiving and managing the funds must not be so unnecessarily bureaucratic nor effectively exclude NGOs from receiving funding under the Structural Funds.

“The legal framework is there and better than ever. It says that all stakeholders have to participate in the process, so we just need to implement it! It’s no longer something we just hope – it’s compulsory, it’s binding -Member States have to dedicate 20%. This is progress!”, said Sali Guntín, EAPN Spain and expert on Structural Funds. “The 20% should include transnational measures defending a Social Europe, with direct participation of people concerned. Civil society has experts and they should be able to exchange together and get involved”, she added.

“This meeting is a very important opportunity for a direct dialogue between policy makers and people experiencing poverty”, said László Andor, EU Commissioner for Employment and Social Affairs. “With one out of four Europeans at risk of poverty or social exclusion, we need to ensure that the right policies are developed and implemented, with the involvement of civil society, to strengthen social cohesion and roll back inequalities. We also need to ensure that our economic policies enhance growth and reduce poverty. I am confident that EU financial instruments like the European Social Fund and the Fund for European Aid to the Most Deprived can also help to make a difference”, the Commissioner added.

The 13th Meeting of People experiencing Poverty gathered delegations of people with direct experience of poverty from 31 different national delegations to address and exchange with EU decision-makers. At this year’s meeting, delegations gave a series of recommendations from the national delegations on how to fund the fight against poverty and invest in the EU Poverty-Reduction Target, topic of the meeting. The meeting also included intense discussions on 5 thematic workshops on Minimum Income for a Decent Life, Homeless not Hopeless, Youth and Poverty, Combating Poverty and exclusion of Migrants, Wealth and Inequalities and the Fight against Poverty.

The Meeting was organized with support from the European Commission.

Report of the recommendations and questions from the Thematic workshops on Minimum Income for a Decent Life, Homeless not Hopeless, Youth and Poverty, Combating Poverty and exclusion of Migrants, Wealth and Inequalities and the Fight against Poverty.

PHOTOs of the meeting

The European Anti-Poverty Network (EAPN) is the largest European network of national, regional and local networks, involving anti-poverty NGOs and grassroots groups as well as European Organisations, active in the fight against poverty and social exclusion. It wasestablishedin 1990.