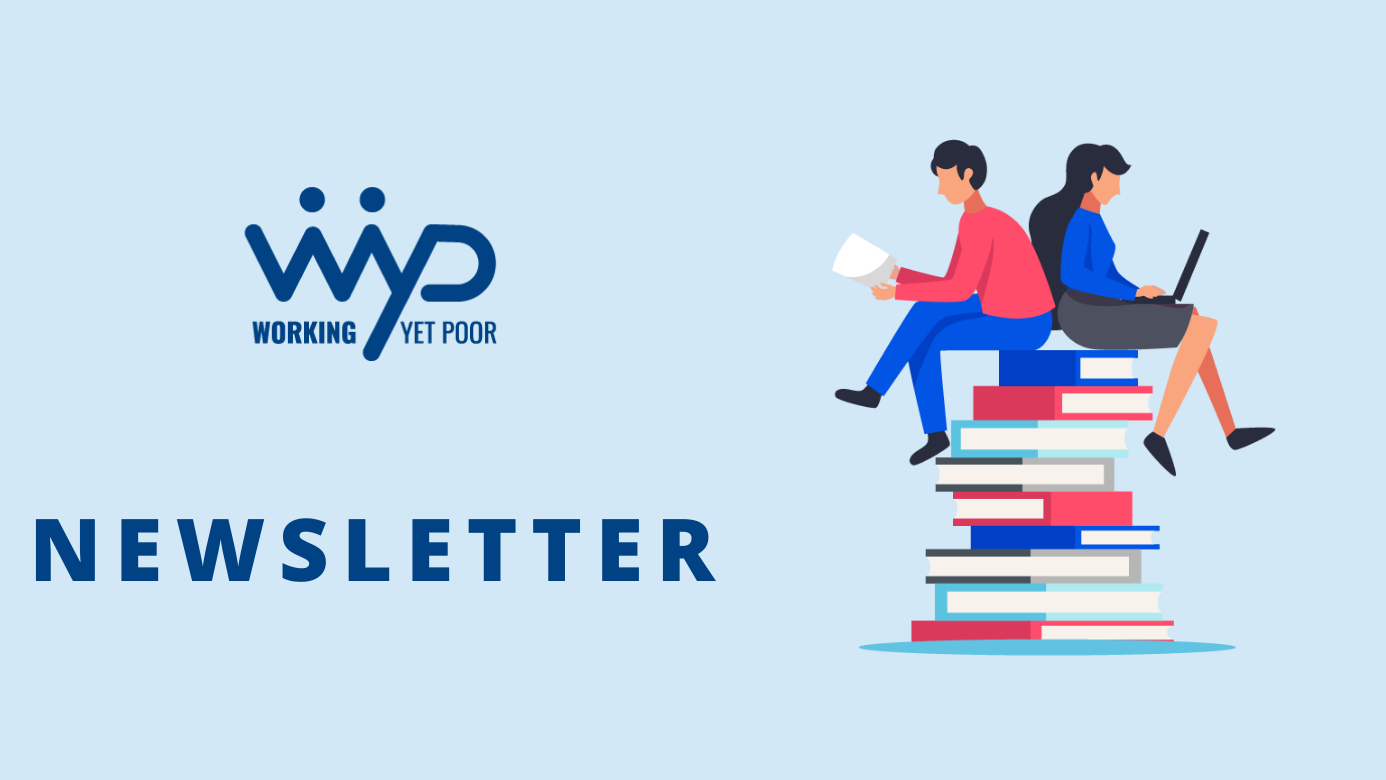 When employment is not enough: the challenge of in-work poverty in Europe

Every 3 months, EAPN will share the Working Yet Poor Newsletter to keep you updated about the project’s findings and the novelties and news of interest related to in-work poverty in Europe. We are therefore very happy to share with you the first newsletter of the WorkYP project. If you would like to receive the newsletter directly into your inbox, register via the project’s website: www.workingyetpoor.eu
You can also download the Newsletter in PDF here.

17 October: International Day for the Eradication of Poverty

In 1992 the United Nations declared 17 October as the International Day for the Eradication of Poverty. Today, 28 years later, poverty still stands out as one of the biggest problems of humankind. Indeed, to end poverty in all its forms is the first of the Sustainable Development Goals (SDG) adopted in 2015 by the UN Member States as part of the 2030 Agenda.

Globally, the number of people living in extreme poverty has declined since 1990, but the pace of change has decelerated and the Covid-19 pandemic risks reversing decades of progress (United Nations, 2020). Although having a job should translate in incomes and this way provide relief against poverty, as much as 8 per cent of employed workers worldwide lived in extreme poverty in 2018. Having a job is not, therefore, any guarantee. The eradication of poverty must be interlinked with the idea of decent work, which together with economic growth makes SDG No. 8 of the 2030 Agenda. It is not only a question of quantity; job creation per se is not the panacea against poverty. Quality also matters.

Europe is not an exception to these trends. The ‘at risk of poverty’ indicator (AROP) shows that as much as 10 percent of the European workers were experiencing in-work poverty in 2018, with a 2% increase since 2007. When first established in 2010, the Europe 2020 Strategy set among its objectives to reduce the number of people at risk of poverty in 20 million by 2020, together with achieving an employment rate of 75%. However, whereas in the pre-covid scenario it seemed possible to reach the employment rate target, the goal to reduce the number people at risk of poverty in 20 million remained more difficult to attain (European Commission, 2019). Labour market segmentation, low-quality jobs and precariousness, together with strong divergences among countries, played a role on this situation (European Commission, 2019).

The Covid-19 pandemic and its negative impact on the European economies will most likely worsen the picture, moving further away the achievement of the Europe 2020 goals. At the same time, any future strategy must incorporate the contents of the European Pillar of Social Rights (EPSR), which devotes six of its principles to fair working conditions and another ten to social protection and inclusion. It seems that the time has come to put in-work poverty at the center of the stage in order to move forward.

Poverty and employment are not mutually exclusive. Empirical data show a link between poverty on the one hand and low-paid and insecure employment, together with unemployment, on the other (Esping-Andersen, 2002). However, the complexity of in-work poverty, its uneven spread across the labour market, the limitations of the existing indicators and the large number of factors to take into account, make arduous any assessment. This explains in turn the difficulties to design adequate policies to tackle in-work poverty. At European level, differences among the various Member States add another layer of complexity (Eurofound, 2017).

The WorkYP Project aims at improving the understanding of how the regulatory framework shapes in-work poverty, contributing to a better assessment of the phenomenon. To do so, it has designed a comparative and multidisciplinary analysis. The comparative analysis aims at learning from the differences in the regulations of several European Countries by understanding the causes of the divergences. The multidisciplinary dimension is necessary to capture the complex and different factors that have an impact on in-work poverty. This is why the Consortium includes three Social Rights Institutions together with Universities from seven Member States, and each University incorporates researchers from different fields.

In order to understand better the differences across the labour market, the WorkYP Project has identified four groups of workers that are particularly vulnerable to in-work poverty (the VUP groups, for ‘Vulnerable and Underrepresented Persons’):

This corresponds to the Project’s assumption that in-work poverty is not uniformly spread across the labour market. Within these groups, attention to the gender dimension is also paid. Regulations are generally not tailor-made for people in the VUP groups and seem, therefore, ill-equipped to help them against in-work poverty. The Project focuses vertically on these VUP groups in the belief that understanding the factors specifically affecting them will contribute to a better understanding of in-work poverty, thus helping to design policies that are more effective in fighting the problem.

Beyond statistics, in-work poverty is a challenge for social Europe and the stability of European societies. More in particular, it risks emptying any substantive content of EU citizenship. A central assumption of the Project is that there is a relation between these two aspects: the enhancement of social rights, essential to the full realisation of EU citizenship, is key in the fight of in-work poverty, and vice versa. This will arguably improve cohesion within the EU, reduce inequalities and divergences among Member States and, therefore, strengthen the whole European project.

The goals and ambitions of Project are therefore high. First, the vertical approach to the study of in-work poverty focused in the VUP groups attempts to overcome the existing limitations of research in the topic and propose tailor-made solutions. Second, the Project seeks to establish a theoretical justification for social rights as functional to the full realisation of EU citizenship, elaborating on the EPSR. Third, it strives for a sound conceptualisation of EU citizenship and its social dimension. Finally, it aims at developing an EU-scale discourse on in-work poverty and propose feasible policy actions for the EU and its Member States to tackle in-work poverty

Where are we now?

WorkYP started in February 2020. In early March, the kick-off meeting brought all the Consortium members in Luxembourg to start working together. Then Covid-19 burst in, making it necessary to assess its potential impact on the Project. The second International Project Meeting was held in September 2020 and had to be celebrated online. The Consortium, with the help of the Scientific Advisory Board, carefully addressed the impact of Covid-19 on in-work poverty in Europe and adapted the Project consequently. Now we are ready to get the first intermediate results in the coming months, when the National Reports assessing the situation in the seven representative countries that form part of the Project (Poland, Luxembourg, Netherlands, Belgium, Italy, Germany and Sweden) will be out.

A number of events, including meetings with stakeholders, national workshops, national conferences and participation in international Conferences are programmed for the first semester of 2021. In the meantime, the Consortium has already produced a report on societal indicators and set up the Project Webpage (https://workingyetpoor.eu/), where useful information can be found and updates are regularly posted. In the coming months, a quizzionaire will be also released to raise awareness about in-work poverty among European citizens.