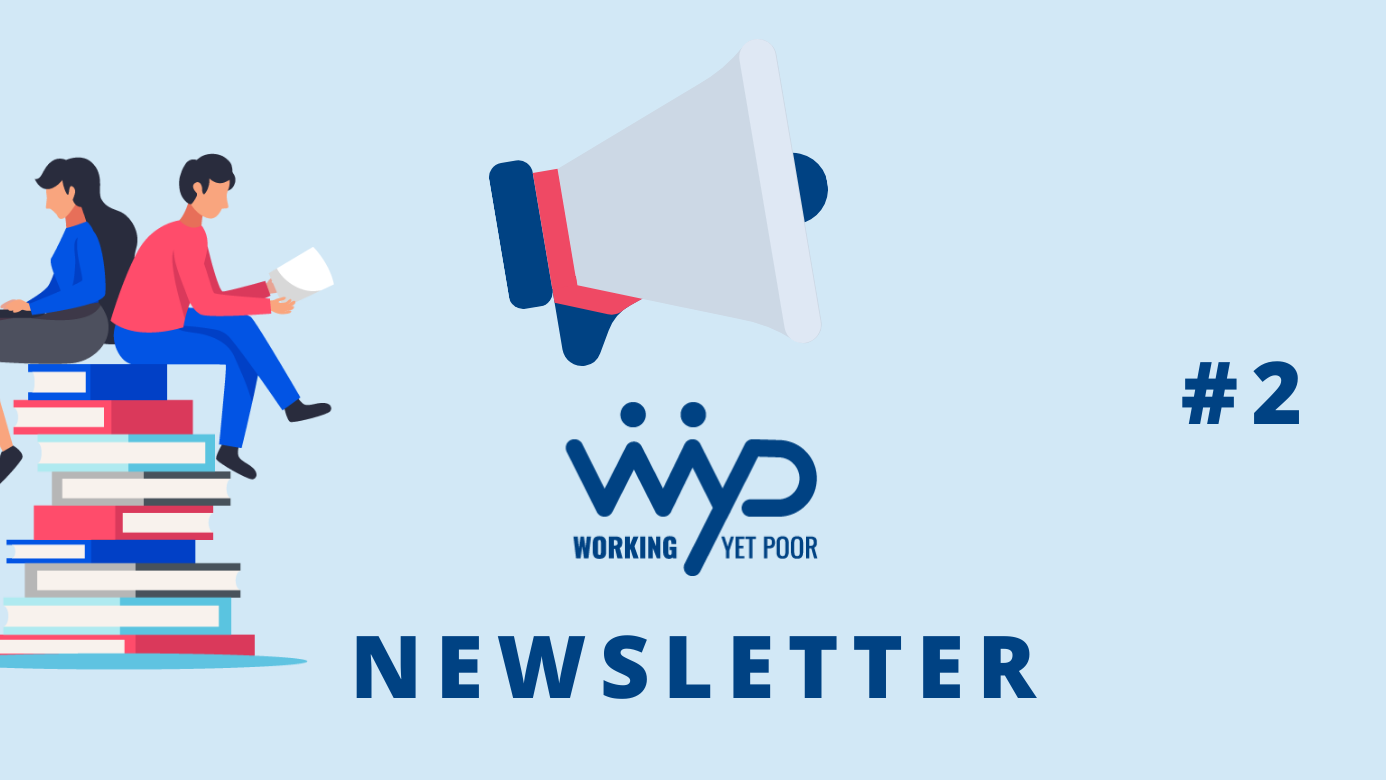 Every 3 months, EAPN shares the Working Yet Poor Newsletter to keep you updated about the project’s findings and the novelties and news of interest related to in-work poverty in Europe. We are delighted to present the second issue of our Newsletter. In this occasion, the focus is on the EU Commission’s proposal for a Directive on Adequate Minimum Wages and its potential to fight in-work poverty. A careful consideration of this proposal is necessary to the elaboration of policy proposals against in-work poverty in Europe. This is why the Project contributed to the organisation of a webinar on the issue that took place on 11 December 2020. We are happy to share here some interesting inputs and conclusions reached in that seminar.

We also wish to take this opportunity to brief you about the activities that were carried out during the first year of the project’s implementation. It is needless to reiterate that the project implementation was marked by the COVID-19 pandemic, turning all face-to-face activities into online. In tight cooperation with project partners, we prepared and submitted 13 deliverables and organized project meetings. Recently, the University Utrecht has joined the project Consortium.

Finally, we wish to inform you about our next activities, meetings and researches. By the end of June 2021, the project partners will organize national workshops and national conferences. Along with these events, important deliverables will be published by summer 2021.
Interesting outcomes are ahead of us, therefore you are warmly welcome to follow and/or join us.

The proposal for a Directive on adequate minimum wages in Europe, formulated by the European Commission, has been preceded by several initiatives and debates concerning in-work poverty at the European Parliament (European Parliament, 2020 and 2019). The launch of this proposal must be seen as one of the outcomes of the European Pillar of Social Rights, which for the first time included in-work poverty per se in the social policy agenda, stating at the same time that ‘adequate minimum wages shall be ensured’ (principle n.6 European Pillar of Social Rights). There is, indeed, a strong connection between the proposal for a Directive on adequate minimum wages and the problem of in-work poverty, as can be seen in the attention paid to the latter in the proposal’s preambles.

National diversity is, therefore, taken into account. The proposal differentiates between Member States with and without statutory minimum wages and establishes two different sets of obligations.

In the case of Member States with statutory minimum wage, Article 5 of the proposal states that they will need to ‘take the necessary measures to ensure that the setting and updating of statutory minimum wages are guided by criteria set to promote adequacy with the aim to achieve decent working and living conditions, social cohesion and upward convergence’. However, despite listing some criteria to help  defining what is adequate level (such as purchasing power, general level of gross wages, growth rate of gross wages, etc.,), the proposal does not establish any strict numerical threshold, offering a wide margin of appreciation to the Member States.

The proposal also envisages other complementary provisions: involvement of the social partners in the setting and updating of the statutory minimum wage, effective access of workers to statutory minimum wages, derogations, public procurement, monitoring and data collection, penalties, etc. Labour law scholars and most trade unions have welcomed the proposal as a step in the right direction, although they have expressed concern on certain points and consider some aspects not sufficient to achieve its goals. On their part, employers have expressed themselves against the proposal arguing lack of competence of the EU in the matter, subsidiarity and concerns about competitiveness. The process still goes on and we cannot anticipate what will happen. In any case, an adequate minimum wage would be only one of the weapons needed to fight in-work poverty successfully.

Is minimum wage a useful tool to combat in-work poverty?

Although one could be tempted to think that a minimum wage settled at an adequate level should be enough to end in-work poverty, reality is more complex. In work-poverty is a multidimensional phenomenon that does not stem only from low wages. Other factors, such as work intensity (part-time work, casual work), precarious works (with short periods of employment and unemployment), low work intensity in the household, as well as the same household composition, access to social services, social security, housing, etc., are to be considered.

But the question is, how useful can an adequate minimum wage be? This question has been at the center of a number of scholarly debates on the relationship between low wages and in-work poverty (Eurofound 2020). Indeed, although certainly important, the link between minimum wages and poverty is not necessarily causal, since the situation of poverty of a particular worker is also influenced by its household’s various sources of income, and not only her wage. Therefore, other factors play a role and finally ‘only a fraction of low-wage workers actually live in poverty’ (Peña-Casas, R; Ghailani, D., 2020). On the other hand, minimum wage schemes do have an effect on in-work poverty. They are useful by a number of reasons: they help ensuring fairer wage distribution and promote a floor of wages (Marchal, S., et al, 2018). In its impact assessment of the proposal of a Directive on adequate minimum wages, the Commission reports that ‘in several countries, improvements in minimum wage protection would result in a reduction of in-work poverty and wage inequality by over 10%’ (Explanatory Memorandum. Point 3, impact assessment). The key policy message seems to be that minimum wages matter, but they alone do not suffice: a broader range of instruments is needed (Peña-Casas, R; Ghailani, D., 2019). To fight in-work poverty effectively, minimum wage policies should be complemented with substantial reforms in different policy domains, such as tax and social security contributions, in-work benefits, family benefits, minimum income schemes, active labour market policies, etc. (see in more detail Peña-Casas, R; Ghailani, D., 2020).

Given the importance of the proposal for a Directive on adequate minimum wages for the Project, WorkYP was involved in a webinar on the topic that took place on 11 December 2020, organized at the initiative of one of our Partners (Lund University). The webinar had two parts. In the first part, Luca Ratti introduced the webinar and assessed the potential of the proposed directive to address in-work poverty and wage disparity. Then, Sacha Garben (College of Europe) and Jeremias Adams-Prassl (Oxford University) discussed, in the form of dialogue, on the purpose, legal basis and contents of the proposal for an EU Directive. It was an interesting and fruitful debate. Given the weakness of Article 153.5 TFUE as a legal basis, alternatives were discussed, and Article 175 on cohesion was highlighted as a potential one, or even as a co-basis together with Article 153.5. Garben and Adams-Prassl agreed on the need to provide good arguments for the use of the two legal bases. It is necessary to show that an adequate minimum wage can foster cohesion at EU level and why an initiative at EU level on the topic is needed. On the contents, Adams-Prassl highlighted the potential of provisions on redress, enforcement, monitoring, data collection and public procurement.

The second part of the webinar was a round-table on the EU Directive proposal and its perception in different Member States: Finland and the Nordic countries (Niklas Bruun), Germany (Eva Kocher), Spain (Ane Fernandez de Aranguiz) and Greece (Stamatina Yannakourou). This was an interesting exercise that helped visualize similarities and differences between Member States in the situation of in-work poverty, the role of minimum wages and the expected impact of the Directive. Among the different questions that were discussed, the perception of the proposal by the different social partners and policy makers showed a difference between the Nordic countries, where the perception is rather negative, also for trade unions, and the rest, where the perception is rather positive (except for employers).

Highlights of the 1st Project Anniversary

In cooperation with project partners, during the first year of the WorkYP project, we have submitted 13 deliverables. Three of them are considered important, since they represent a common basis of understanding for further research, namely societal indicators’ report, gender policy and indicators’ report and operational definition of VUPs.

Gender is an integral component of social relations based on perceived and regulated differences between men and women. It represents an axis of power that results into an unequal access to opportunities and resources. Statistics show that the risk of poverty, as well as the risk of in-work poverty, have a gender dimension. Thus, the gender policy and indicators’ report investigates the gender dimension of in-work poverty, assesses the spread of in-work poverty among women and studies the societal impact of being a working poor woman, also considering how it may influence households’ incomes and women workers individual careers.
Finally, the operational definitions of the VUPs primarily define the four main target groups and sets the basis for further studies and understanding of the subject as such.
We need to highlight another deliverable, which aim is primarily to incentivize and engage the wider interested public in the project topic by answering a few simple questions. This is the Quizionnaire, which consists of non-personal questions, but depicts the in-work poverty very illustratively. The Quizionnaire can be found here.
In the first year of the implementation, we organized two project meetings, the kick-off meeting (March 2020) and the second transnational project meeting (September 2020). Both meetings served to discuss basic topic concepts, to coordinate tasks and to define the content of deliverables that were later on submitted. More about both meetings is available in the first project newsletter.

In January 2021, a new beneficiary has joined the Consortium, the University of Utrecht. The new beneficiary will particularly contribute to the Dutch national report, which aim is to elaborate on the partners’ national legal systems, focusing on how the financial-economic crisis has impacted on the national social and legal order.

The WorkYP Project is entering a very intense period on its development path. In the coming months a number of key deliverables are going to be finished, particularly the national reports and the social partners and industrial relations system’s report. Project partners will organize the national workshops, where they will discuss with the most relevant local and national stakeholders the legal, social and economic aspects of in-work poverty in their respective countries. The national workshops will help shaping the national reports as such as well as getting feedback from the ground about the project topic. Along with the national workshops, a series of national conferences will be organized by project partners to present the outcomes of the national reports, discussing with interested audience the first project results and paving the way for future work. The schedule of the events will be published on WorkYP website.  We will inform you about this interesting period and its outcomes in the next Newsletter and on the project’s website.