EAPN at the EU leaders Social Summit in Gothenburg 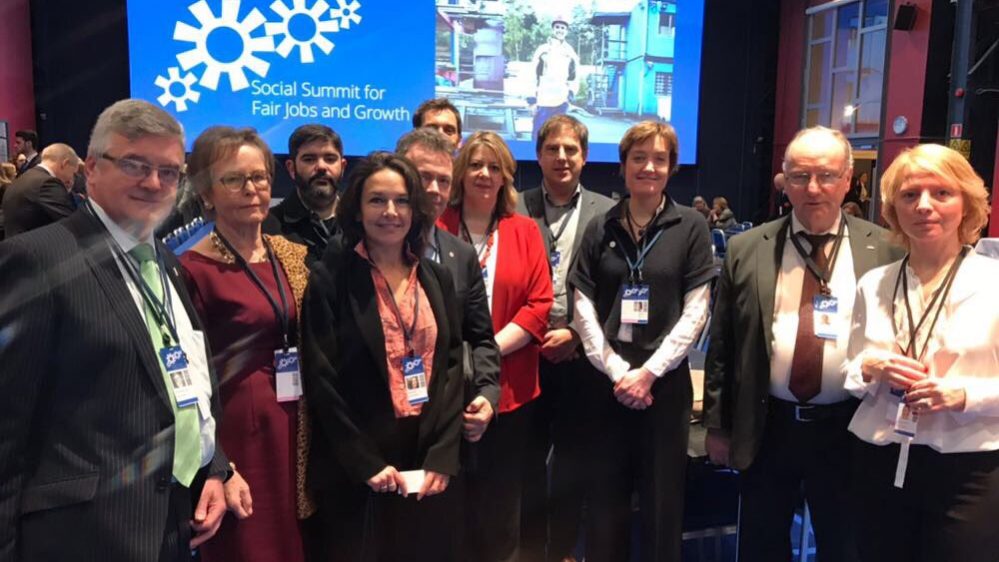 The European Pillar of Social Rights was solemnly proclaimed on Friday, 16 November, by Heads of States and Governments of the European Union meeting at the Social Summit for Fair Jobs and Growth in Gothenburg, Sweden. This is an important milestone for social Europe, as Member States commit to anchor a strong social dimension in the future of the European Union, marking a return to core European values and rights. In his press release on the occasion, European Commission President Jean-Claude Juncker stressed the importance of this commitment, and underlined the joint responsibility and need for political will to implement the Social Pillar, explicitly highlighting civil society engagement: “The Pillar – and Europe‘s social dimension as a whole – will only be as strong as we allow it to be. This is a joint responsibility and it starts at national, regional and local level, with a key role for social partners and civil society.”

EAPN was present in Gothenburg through our President, Sérgio Aires, who attended as part of the delegation of the European Platform of Social NGOs (Social Platform). This is part of his intervention:

“The signature of the Social Pillar – and how it happened – can be the start of a meaningful turning point. But while it is true that we need fair jobs, we also need fair growth and a fair economy. One of the difficulties in implementing the Pillar, pointed out by different Member States, is the lack of financial resources – what about the billions of Euros stashed away in tax havens? We can’t continue to complain about the lack of resources for social protection and for the sustainability of the European social model and at the same time permit – legally! – that a totally unfair economy blocks the redistribution of wealth. This is what is also undermining the trust of the European citizens, especially the 25% living at risk of poverty, in the EU and its institutions!

On the other hand, if we really think that social spending is an investment, it should not be counted wholly as expenditure. We must urgently revise the European Semester rules and introduce some rationality in the stability pacts in order to make it possible for Member States to invest without risk of being expelled from the Euro zone or having to raise their debts even more.”

The Social Platform’s key messages to the Summit were:

EAPN members have closely engaged with this initiative ever since its launch in March 2016, at both national and EU level. While the European Pillar of Social Rights missed the opportunity to be a comprehensive, overarching strategy to eradicate poverty, the focus now is to push for it to go beyond a framework of principles and become a true framework of rights that can make a real difference to people’s lives, ensuring freedom from poverty and social exclusion for all. EAPN believes that people experiencing poverty and the civil society organisations representing them have a key role to play in the delivery of the Pillar. See our key messages from EAPN’s position paper:

We are hosting a joint event on 7 December in the European Parliament: Building a European Social Standards Union. See more & register here.

A‘feedback webinar’ is being organised for EAPN members on 23 November 11:00-12:15 with Sérgio Aires, Heather Roy, Secretary General of Eurodiaconia, also present in Gotheburg, & Michael Gast, Press and Media Officer, Directorate General for Employment, Social Affairs and Inclusion, Unit 01: Coordination. Members are invited to register directly for the webinar via this link.