Electing CHAMPIONS for a Social Europe: A Call for Commitment

“This European-wide campaign builds around a manifesto which demands a commitment to fight for a more Social Europe, free of poverty, social exclusion and inequalities from the candidates to the elections. What we need is to see a real commitment from the candidates, so that they can be held accountable by the people who have elected them, millions of them dramatically living in or at risk of poverty. We need a European Parliament that is on the side of the people and fully represent their main interests.”, says Sérgio Aires, President of EAPN.

“Due to political and economical choices that we know are the wrong answers, the levels of poverty, social exclusion and inequalities have reached peaks that had never been seen before. The austerity measures have been dismantling welfare states and making people pay for a crisis they did not create. There are other ways and we all know it. With civil society being put away from the decision-making processes, we understand that people lose faith in the European institutions. And that’s precisely why it is more than ever important to elect people who will make the difference, when the EU is failing on its founding principles of democracy, solidarity that ensured peace and well-being”, Sergio Aires added.

“The widening gap of inequalities and the absence of participation of civil society in decision making processes raise serious questions on the gap between the ones who hold the economic and political powers and the rest of the people. People are not fools but feel out of any control or power. We are at a turning point where democracy and peace are seriously threatened,” said Barbara Helfferich, Director of EAPN.

Electing Champions for a Social Europe is a pan-European campaign carried out by the European Anti-Poverty Network (EAPN) and its members (29 national networks and 18 European organizations) representing hundreds of organizations on the ground working with thousands of European citizens, notably people experiencing poverty, as well as other partners supporting a social Europe.

The key demands of the campaign are:

√ A Social Pact for a Social Europe
√ An effective EU Strategy to fight poverty, social exclusion, inequalities and discrimination
√ Strengthened democracy and civil-society participation
√ An annual Hearing with People experiencing poverty in the European Parliament

Several MEPs have expressed their support to EAPN’s manifesto and have committed to EAPN’s pledge:

“I fully support and sign up to this pledge. We need a Social Europe.“

“We must challenge the values of austerity measures and their use as an alibi to destroy Welfare States. I strongly support and sign up to EAPN’s pledge“

“I wish to thank the attendance for its commitment to a Europe of dignity; I fully support this campaign and sign up the EAPN’s pledge“.

“I strongly support EAPN’s manifesto and sign up to EAPN’s pledge. Progress has been made but much remains to be made“.

NOTE TO THE EDITOR: 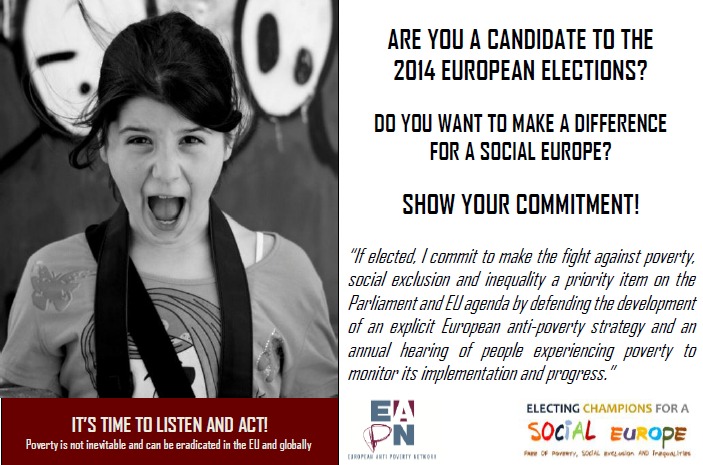 Established in 1990, the European Anti-Poverty Network (EAPN) is the largest European network of national, regional and local networks, involving anti-poverty NGOs and grassroots groups as well as European Organisations, active in the fight against poverty and social exclusion.