Popular Political Economy in Europe? Looking for a pathway for job-creating and ecological public investment 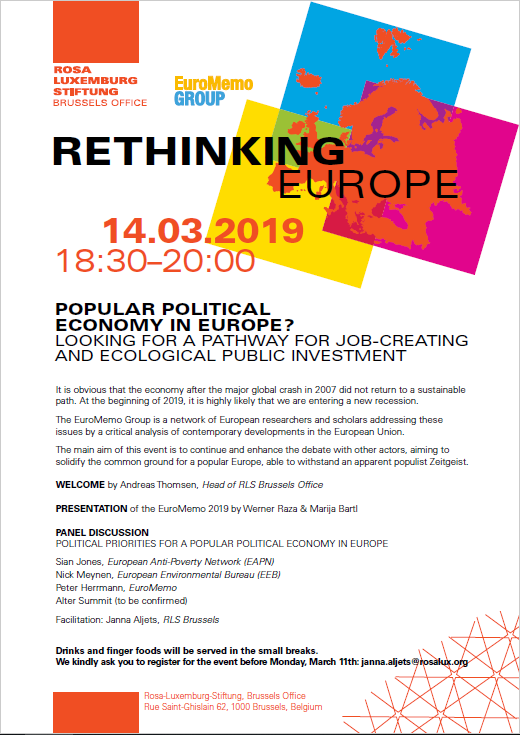 It is obvious that the economy after the major global crash in 2007 did not return to a sustainable path that would guarantee a decent life in dignity, providing socio-economic security and unfolding of human capabilities to the majority of European citizens. At the beginning of 2019, it is highly likely that we are entering a new recession. Also, while there are signs of stability in some places, it is equally clear that such achievements are established on the shoulders of social strata and/or countries and regions that are not winners of global value chains, but losers, standing at the end of poverty chains. Within the EU, it is evident by the arrogance, expressed in using the term “PIIGS” for a group of member states that are victims of an oppressive economic strategy; globally, it is obvious that the catching-up of the so-called emerging economies means increasing inequality in countries such as Brazil, China and India.

The European Economists for an Alternative Economic Policy in Europe (the EuroMemo Group) is a network of European researchers and scholars addressing these issues by a critical analysis of contemporary developments in the European Union. Critical research and policy analysis alone will however not trigger political change on the ground. In order to achieve the latter, discussion and coordination with political activists is essential for asking the important questions and to move things forward.

We face the urgent need to go beyond the orientation of coping with the manifest crisis and the temporary recoveries. We need – globally, regionally and nationally – socio-economic programmes that allow for a transformation towards a ‘people’s economy’, also being a bulwark against authoritarian populist advances. This evening will briefly present the EuroMemo Group’s work and recent analysis. The main aim is to continue and enhance the debate with other actors, aiming to solidify the common ground for a popular Europe, able to withstand an apparent populist Zeitgeist.

If you would like to participate please register by March 11th, by sending an email to  janna.aljets@rosalux.org.