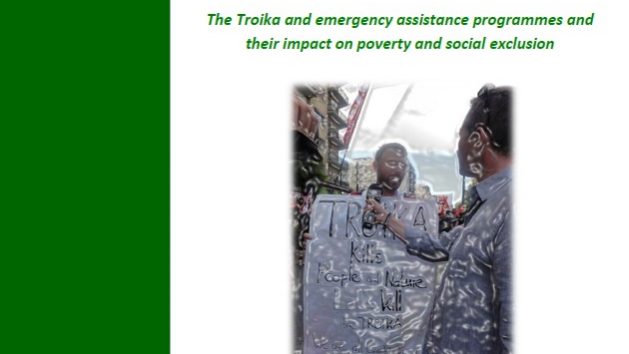 Under these Troika arrangements, the loans are provided at below market rates, disbursed in tranches over three years. Disbursement is subject to strong macroeconomic and “structural” conditionality through closely monitored programmes agreed in binding Memoranda of Understanding (MoU) with recipient governments.

In 2012, EAPN created a dedicated Task Force to study the impact of the MoU on poverty and social exclusion, looking at five countries under such arrangements (Greece, Ireland, Portugal, Romania, Spain), and a sixth – the United Kingdom.

Greece, Ireland and Portugal are the three Eurozone states. Romania is in the same situation, but, as in the case of Hungary and Latvia, the European Central Bank is replaced by the World Bank, as these countries are not yet in the monetary union. Spain, a Eurozone country, has received external financial assistance for the recapitalisation of its banks, with macroeconomic conditionality attached.

The UK is not in receipt of external financial assistance, is not in the Eurozone, and it is also one of only two Member States out that have not signed up to the Fiscal Compact. However, even if its domestic policy is the least constrained by European governance, the high public debt, and severe imbalance of payments led the UK government to undertake a similarly severe domestic three-year fiscal squeeze, expressed in its Comprehensive Spending Review of 2010.

Over the past two years, the Task Force members have collected evidence on the impact of the economic assistance programmes on poverty and social exclusion, with particular reference to the “austerity” programmes, and aiming to clarify to what extent Troika intervention is part of a broader ideological agenda, which underpins current EU policy, including the Fiscal Compact and economic governance, for members of the Eurozone and beyond, attempting to answer these questions:

This report is the synthesis of the Task Force findings. The Key Messages are clear, and extremely worrying:

Additionally, you can consult the full Annexes of the report:

Appendix 1 – Methodology for producing this report

Appendix 3  – Summary of the key content of the original and one or more recent Memoranda of Understanding for Greece, Ireland, Portugal and Romania

Appendix 4 – Analysis of the economic situation in Greece, Ireland, Portugal, Romania, Spain and the UK, using data adapted from Eurostat, including the Macroeconomic Imbalances (MIP) Scoreboard.