Poverty is not an accident but the result of political choices 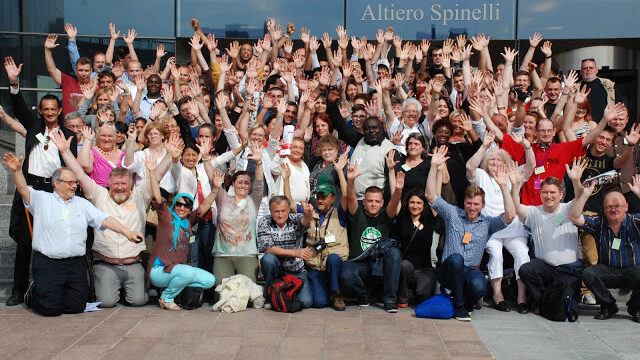 These meetings were initiated as part of the agreed objective of the European Inclusion strategy “to ensure the direct participation of people experiencing poverty and social exclusion”. Delegations from 26 Countries exchanged with each other, with members of the European Parliament and policy makers on the growing gaps between the income available from work and welfare and the costs of a ‘basket of goods and services’ needed to live in dignity.

“The economic and political vision, centred on austerity measures has resulted in the loss of people’s trust in their democratic institutions and is creating a deep economic, social and democratic crisis. Austerity measures have contributed to rising poverty reflected in official figures showing nearly 5 million more people in poverty and social exclusion since 2009. This once again shows that poverty is not an accident but the result of political choices” said Sergio Aires, President of the European Anti-Poverty Network (EAPN).

Commissioner for Employment Social Affairs and Inclusion, Mr Lazlo Andor addressed the meeting and acknowledge the lack of progress on achieving the EU poverty reduction target. He outlined key Commission proposals to reinforce the efforts to reach the poverty reduction target including the Social Investment Package with specific actions on child poverty, homelessness and adequacy of minimum income schemes. He also highlighted the agreement on the youth employment guarantee, the proposals to strengthen the use of the European Social Fund for social inclusion and the proposed European Fund for aid to the most deprived.

The meeting was followed by a symbolic action that took delegates from the Commemorative stone for the victims of poverty on the Esplanade in front of the European Parliament, to the Place du Luxembourg, where all delegations showed the messages they had presented during the 12th Meeting, and called for an end to austerity policies.

NOTE FOR THE EDITOR

The 12th EU Meeting was organised by the European Anti-Poverty Network, with support from the European Commission and in association with the Irish Presidency of the EU.

The impact of previous year’s meetings

The European meetings of people experiencing poverty have contributed to keeping poverty and social exclusion visible in the European agenda and highlighted key policy areas such as indebtedness, the privatization of services, the need to invest in social protection and welfare, child poverty, housing and homelessness and the links between discrimination and poverty.

They have also had a great impact on people in poverty themselves, on their confidence in the role they can play in society, as most participants have increasingly engaged in anti-poverty organizations after the Meetings. Catalysing participation, engagement, reinforcing civil-society organizations in their advocacy work, European Meetings have been gradually reproduced in almost all European countries by the national networks of the European Anti-Poverty Network.

Unique in this Year’s meetings

Previous meetings have been held in official conference centres including the official Belgian State Egmont Palace venue. This year’s meeting took place in a constructed conference centre on the Esplanade, the door step of the European Parliament in Brussels. This public venue reflects a call for solidarity to take centre stage in the response to the crisis, to reject xenophobic responses and to call for a democracy that is close to the people and deserving of the name democracy.

Topics of discussions of people experiencing poverty and European officials

The recent Commission Communication ‘Towards social Investment for Growth and Jobs’ which as released as part of its Social Investment package calls on Members States to fully implement the Recommendation on Active Inclusion (2008) integrating its three pillars, adequate income support, inclusive labour markets and enabling services.

The Communication commits the Commission to develop in 2013 a common methodology for reference budgets as part of the monitoring of adequacy of income supports.

The exchanges at the 2013 meeting contributed to this objective by discussing:

1) what should be part of an essential basket of goods and services to be used in reference budgets,

3) Practices that people experiencing poverty and their organisations are developing to fight poverty and exclusion and what is helping and hindering the implementation of these practices.