EAPN takes part in the Annual Convention for Inclusive Growth 2016 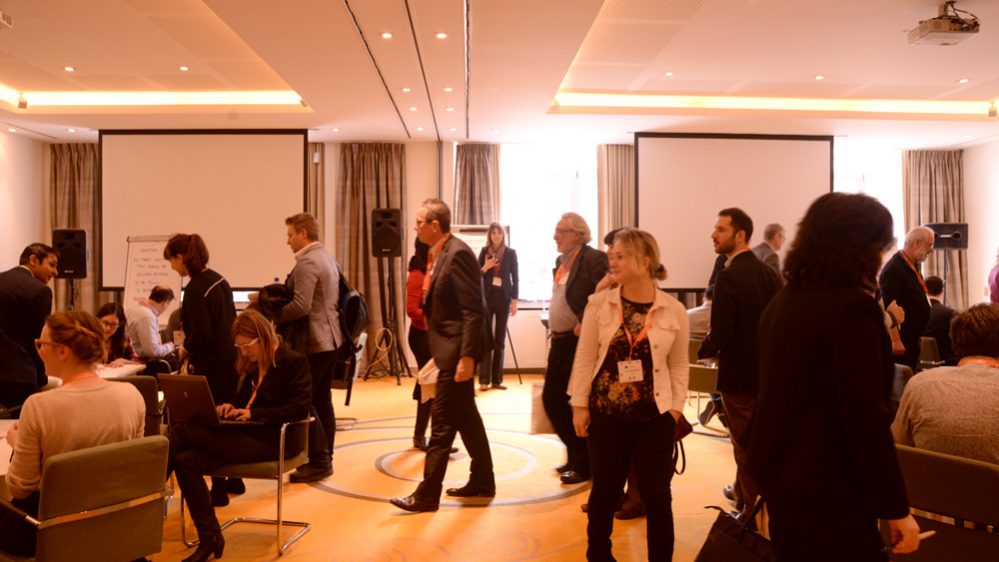 21-03-2016 – EAPN, represented by delegates from all over Europe, attended the Annual Convention for Inclusive Growth 2016 (#ACIG2016) on 21 March, and put forward 4 Key Messages, along with 6 messages from the 14th Meeting of People Experiencing Poverty, held last November in Brussels.

The Convention was dedicated to identifying ways to improve Europe’s social dimension, by fighting poverty, reducing unemployment, and making sure no one is left behind, while the discussions mainly addressed the recently-launched consultation package around the establishment of a European Pillar of Social Rights.

EAPN’s participation in the Annual Convention

EAPN welcomed the proposal for a European Pillar of Social Rights and the ample time allowed for the consultation process.  Key issues, which had emerged from previous debates and consultations, have been picked up, such as adequate income support, access to quality services including housing, inclusive labour markets and better supported transitions towards quality employment, and the importance of stakeholder dialogue. With political will and leadership, it seems possible to progress these issues, as part of Europe 2020, the European Semester, and other relevant processes. This commitment should be further reinforced by the White Paper to be released in early 2017, following the consultation on the Social Pillar.

However, two important questions remain. One is how will the Social Pillar will build on the existing processes, and bring added value to get Member State buy-in. The second is that, while the Social Pillar speaks about inequalities, poverty, and exclusion, it still follows a logic of prioritising macroeconomic objectives, and tackling social issues because they are perceived as “bottlenecks to growth”, rather than a question of fundamental rights.

EAPN President Sérgio Aires, in his intervention as part of the high-level panel discussion which reflected upon the day at the conclusion of the event, underlined these aspects, questioning the commitment to inclusive growth:

“While insisting on growth as the main orientation, we forget that inequalities amongst that kind of growth were responsible for the enormous raising of numbers of people living in poverty and extreme poverty. The main problem is still the redistribution of wealth and tackling inequalities. And let me be as direct as possible: it is time – if we really want citizens to believe in the EU project – to stop being cynical about the causes of this crisis and do something real to avoid a continuous repetition. If we want to be serious about the redistribution of growth and wealth, start by closing the tax havens! This is something that would help our social protection sustainability immediately and, therefore, also the implementation of the European Pilar of Social Rights.”

a) the importance of explicitly mainstreaming integrated Active Inclusion approaches in Europe 2020, the European Semester, and the Pillar of Social Rights;

b) the primary function of welfare benefits of providing safety nets to protect against and prevent poverty, as well as to preserve human dignity, rather than to be instrumentalised for activation purposes;

c) the importance of meaningfully associating stakeholders, including people experiencing poverty and their civil society organisations, in the design, implementation, and monitoring of policies, at a national and EU level.

Various EAPN members attended this workshop, which followed a fully participatory approach, with formal speakers. Elke Vandermeerschen (Belgian Anti-Poverty Network, Steering Group of EAPN’s EU Inclusion Strategies Group) was rapporteur for the workshop, and the messages from the 14th European Meeting of People Experiencing Poverty were distributed to participants. Two key conclusions emerged at the workshop:

1) That there are many instruments available that can be used (Peer Reviews, Directives, Structural Funds, etc) to progress the 20 areas identified in the European Pillar of Social Rights.

2) While inequality is identified as a key concern in the proposal, no attention is given to the need for better redistributing mechanisms, through decent wages and redistributive tax policies.

THE SOCIAL DIMENSION OF THE EUROPEAN SEMESTER

Paul Ginnell (EAPN Ireland, Steering Group of EAPN’s EU Inclusion Strategies Group) was guest speaker in this workshop, presenting EAPN’s position on Europe 2020 and the current functioning of the European Semester, including the main findings of EAPN’s assessment of the 2015 National Reform Programmes, EAPN’s response to the Annual Growth Survey, and EAPN’s recommendations for a more social and democratic European Semester. He also covered the work of the Irish Better Europe Alliance, which engages with the European Semester. The main focus of the group discussion afterwards was on strengthening stakeholder engagement in the Semester, highlighting the need for clear guidelines, for the resourcing of civil society, and that any engagement is meaningful.

See a brief overview of all side-events organised at the Annual Convention here.

This side event was co-organised by EAPN and the European Economic and Social Committee, to assess progress on the 20% ear-marking of ESF money for poverty reduction. It drew on the work and findings of a dedicated EAPN Task Force on the topic, and on the upcoming EESC opinion on “Funding effectiveness on poverty and social exclusion” (SOC/537). Presentations were made by Fátima Veiga (EAPN Portugal, Chair of EAPN’s 20% of ESF Task Force) and Krzysztof Balon, EESC member, Vice-President of the SOC Section, rapporteur of the above-mentioned Opinion. These were responded to by Marie-Anne Paraskevas, Senior Policy Officer, European Commission. The discussion that followed outlined the need for serious monitoring by the Commission of what is included in the spending of the 20% earmarked for social inclusion, the importance of NGOs actively engaging at all levels to ensure serious debate and actions, support from the Funds to tackle poverty and social exclusion, and the need for sanctions when the partnership principle is not respected.

EAPN was one of the organisations invited to intervene in an open discussion organised by the European Trade Union Confederation, aimed at developing a collaborative pro-active narrative about the risks, opportunities and shape of the European Pillar for Social Rights, and their implications on Europe’s workers and societies at large. EAPN stressed the importance of adequacy and quality that foster dignified lives beyond mere basic minima, and the importance of continuing to pursue commitments made to the Europe 2020 targets.

The proceedings of the 4th Annual Convention of the Platform against Poverty and Social Exclusion are available on the Convention website (Related Documents).

The Convention on social media: #ACIG2016 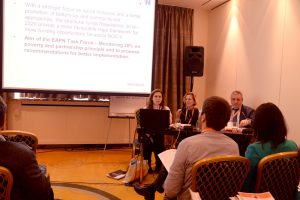 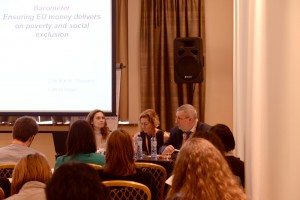 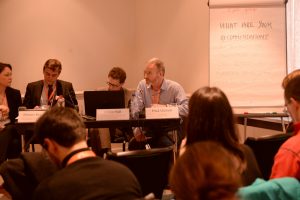 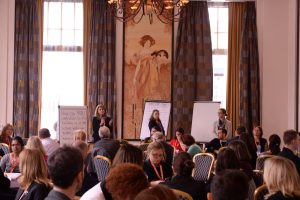 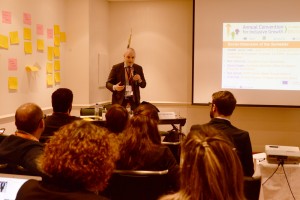 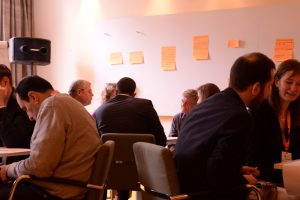 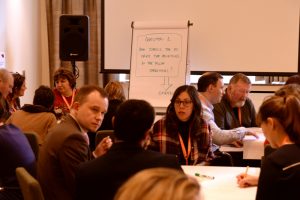 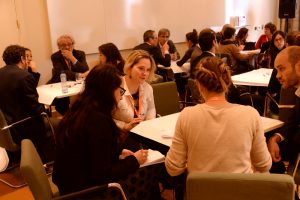 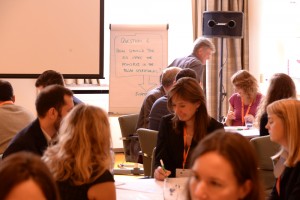 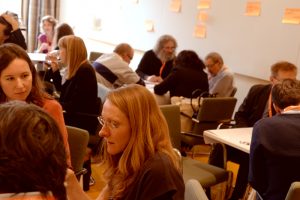 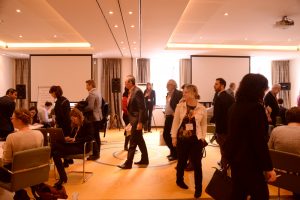 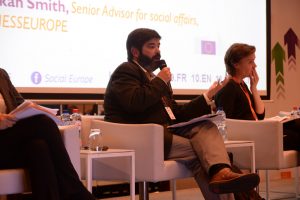 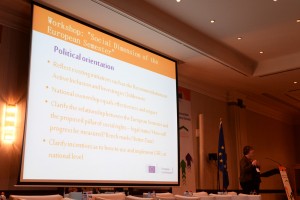 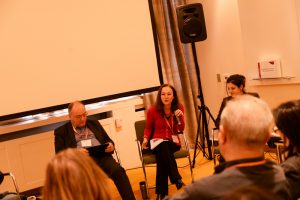 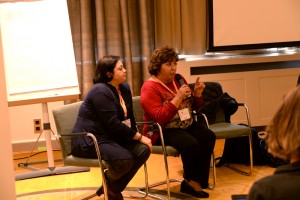 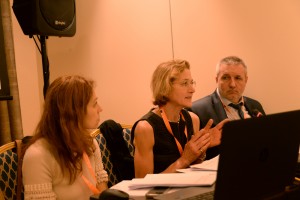 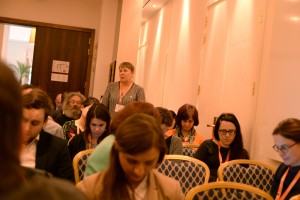 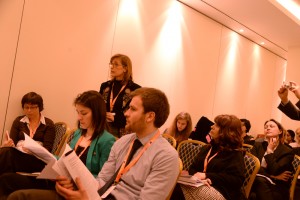 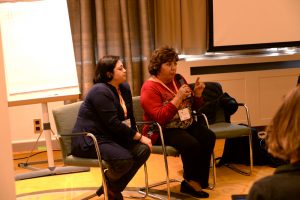 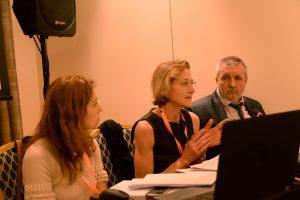 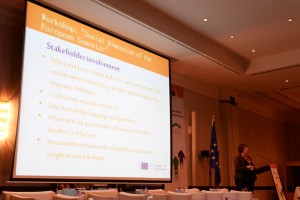 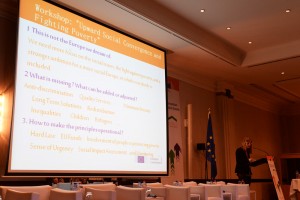 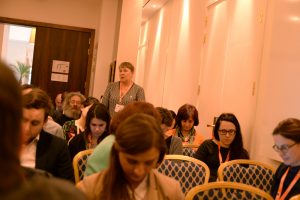