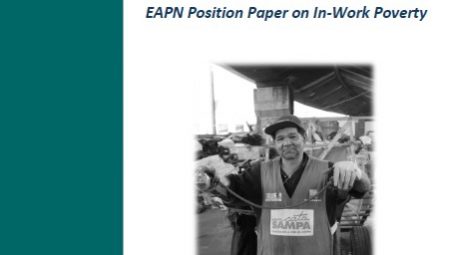 Download the report in English here. And in Maltese.

This paper was launched in the framework of the Third Annual Convention of the European Platform against Poverty and Social Exclusion, on November 26, during a side-event entitled “In-work poverty – The Contribution of Employment to Poverty Reduction and Inclusion”, co-organised by EAPN together with the European Association of Service Providers for Persons with Disabilities (EASPD) and the European Network of Social Integration Enterprises (ENSIE).

As in-work poverty is a prominent topic in the European Platform Against Poverty and in the Social Investment Package, and it is featured as an indicator in the Social Dimension of the EMU Scoreboard, the Annual Convention is the key place to give it visibility, and to look at the cross-over between the poverty and employment targets of Europe 2020, and how we can ensure that they are mutually reinforcing.

The input of the three organisations was followed by a lively discussion with representatives of the European Commission and the European Trade Union Confederation, as well as with the audience, to put forward key messages and recommendations for the fight against in-work poverty in the European Union. Around 100 people attended the event. Find below the main interventions and conclusions.

European Association of Service Providers for Persons with Disabilities (EASPD):

A few photos can be viewed here

See here for our article on the Annual Convention, including EAPN’s key messages brought to it, and here for a press release: Ending poverty is a political choice!