This document (35 pages) gathers the EAPN position papers presented on the occasion of the Third European Round Table on Poverty and Social Exclusion, Rotterdam, 18-19 October 2004.

The report identifies the major achievements of the National Action Plans on Inclusion to June 2004. It must be remembered that the NAPs Inclusion process is not quite four years old.

In this position paper,  EAPN is arguing is that the commitment made by Heads of State and Government in Lisbon in 2000 to bring forward a strategy to make a decisive impact on the eradication of poverty is as relevant, if not even more relevant, today.

It is clear that we will not reach or even move towards the objective to ‘make a decisive impact on the eradication of poverty and social exclusion by 2010 with ‘more of the same’.  To achieve this, we need a serious boost to the strategy.

This paper summarises the analyses by EAPN national networks of the Report and makes some proposals on how to the make the process more effective in the context of the mid-term review of the social inclusion strategy and the discussions on ‘streamlining’ social inclusion and social protection processes.

EAPN, urges that the following key messages emerge clearly from the review of the Lisbon agenda: the need to achieve a balance between Social, Employment and Economic Policies; the need to maintain a visible and effective EU Inclusion strategy as part of the EU Social Policy Agenda.

Without covering the full range of technical issues linked to the legal status and financing of Social Services of General Interest, and before commenting on the current legal development at EU level, EAPN wants to define more precisely the expectations of organisations representing the interests of people experiencing poverty and social exclusion in terms of access and quality. 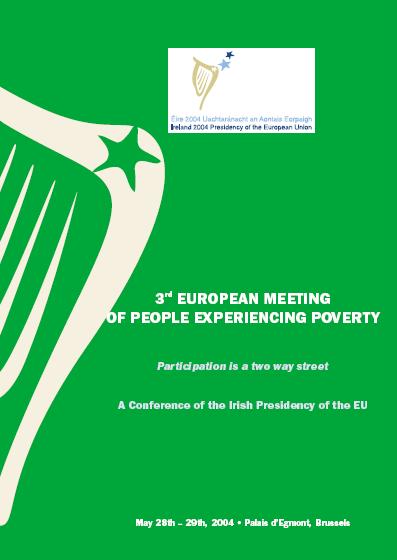 Report of the Third European meeting of people experiencing poverty, 28-29 May 2004

The theme of the Meeting – Participation is a two way street – focused on the importance of Governments at national and EU levels actively engaging with people experiencing poverty on their situations.

EAPN report – Reinforcing the Inclusion Strategy in an Enlarged EU

This document is the report of the EAPN Seminar “Reinforcing the Inclusion Strategy in an Enlarged EU” which took place on 11 May 2004 in the premises of the European Foundation for the Improvement of Living and Working Conditions (County Dublin).

This is the policy position taken by EAPN in response to the publication by the Commission of the Third cohesion report, which outlines the objectives, priorities and methods of the Structural Funds for the new programming period, 2007-2013.