EAPN & EUROCITIES REPORT – The EU Strategy for Social Inclusion: Making it work at the local level

EAPN & Eurocities have just published a joint report on the EU Social Inclusion Strategy, on the basis of the outcomes of the conference they organised in Athens on 28 February and 1 March 2003.

In response to the Commission proposal, EAPN would like to stress first of all the importance of maintaining visible the social inclusion strategy within the streamlining process. 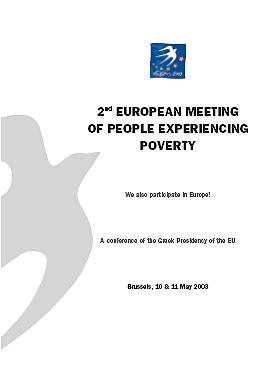 Report of the Second European meeting of people experiencing poverty, 10-11 May 2003

EAPN holds that quality jobs are essential to tackling poverty; therefore EAPN is engaged by the issues in this document, and sees it as legitimate and essential to step into the debate.

EAPN has just published a research on the European Commission’s Local Social Capital Programme (1999-2002). EAPN’s research includes a survey of its members’ awareness of the programme and an analysis of information provided by the “Intermediary Bodies”.

In this paper EAPN sets out its reflections on the Commissions Communication and recommendations for the revised Guidelines.

This document is the Input by Fintan Farrell, Director EAPN on the occasion of the  “Mid Term Review of the Social Policy Agenda: Achievement and perspectives” Conference organised by EU Commission on 19-20 March 2003.

This briefing note is divided into 3 parts: the Joint Inclusion Memoranda; the EU Social Exclusion Action programme; and EAPN and NGOs in the accession countries.

Final declaration of the EAPN-EUROCITIES Joint Conference: ‘The EU Strategy for Social Inclusion: Making it work at the local level’

The Conference brought together representatives from local authorities, NGOs, national and European institutions and other actors involved in the fight against poverty and called for a greater involvement of the actors at the local level in the Strategy.