29/01 – EAPN participated in a small workshop with other social NGOs including Eurodiaconia, Caritas, Youth Forum, Solidar and Eurohealthnet, to discuss Eurofound’s forthcoming Research on the Social Inclusion of Young Peope, as part of Pillar 4 of their main Research programme: adequate living standards and promoting social cohesion.

EAPN Speaks at Green Family Meeting in Parliament Week in the EP: How to use the Economic Semester for building a Common Strategy for Economic Policy Coordination

28/01 – The Green held a capacity-building event for their national members as part of Parliament week in the EP. The meeting involved 100 national Green Party members and MEPs.

23/01 – Fintan Farrell, Director of EAPN spoke in the European Parliament Hearing on the future of the European Fund for the Most Deprived, the proposed successor to the European Food Aid Programme.

The Water Campaign: Full steam ahead into 2013 – Sign the petition against water privatization!

Many millions of people continue to be deprived of clean, safe and affordable water and sanitation, even in Europe. The European Commission can do something about it, but WE have to put it on their agenda! One million signatures from EU-citizens are needed.

Dec 2012 – TheSlovak Anti-Poverty Network published first Shadow report on poverty and social exclusion in Slovakia, drafted with the support from the Institute of Sociology and F. Ebert Foundation and utilised by experiences as  a member of the Commission Network of Social Inclusion independent experts.

10/01 – Lone parents will increasingly struggle to achieve a decent standard of life in Scotland due to the combined impact of cuts to welfare and the rising cost of food and fuel according to research published today.

EAPN Review of New Publication: Between the Social and the Spatial: Exploring the Multiple Dimensions of Poverty and Social Exclusion

02 Jan 2013 – EAPN was approached to review a new publication published on the 2nd January 2013, by Housing, Theory and Society series published by Routledge (Jan 2013) titled Between the Social and the Spatial: exploring the multiple dimensions of poverty and social exclusion, edited by Katrien de Boyser, Caroline Dewilde, Danielle Dierkx and Jurgen Friedrichs. The book is a useful summary of recent developments on poverty research and attempts to bring together the ‘social and the spatial’ aspects, which until now have been developed as parallel research areas. 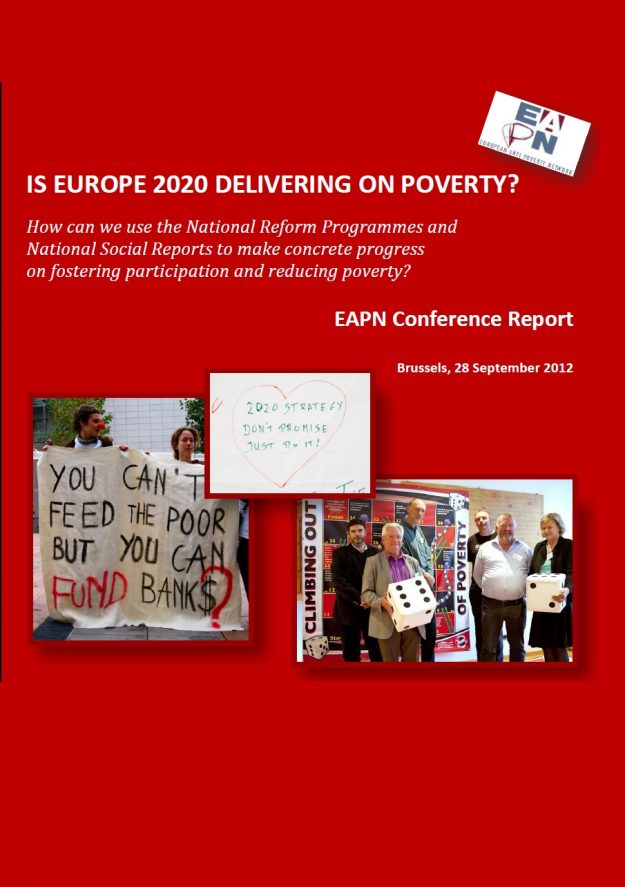 EAPN releases its conference report: “Is Europe 2020 delivering on poverty?”

This major conference offered an opportunity to discuss the reality for the most vulnerable in the context of austerity policies and the malfunctioning of stakeholder participation in decision-making, and provided a chance to discuss how to improve this situation. It built on EAPN members’ enormous efforts to engage in the Europe 2020 Strategy and their…